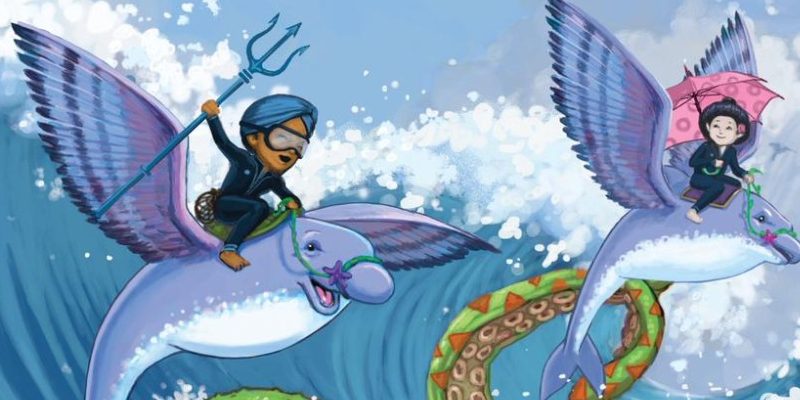 Shanna Germain is co-owner of Monte Cook Games and lead designer for their newest offering, “No Thank You, Evil!”, a roleplaying game based on the award-winning Cypher System designed specifically as a tool for introducing kids to gaming. Shanna took a few minutes out of her busy schedule to talk about her history with gaming, the development of “No Thank You, Evil!”, and balancing work and family life.

Thanks so much for chatting with us, Shanna. We know how busy you are even without a Kickstarter running.

Before we get into all the exciting things happening at Monte Cook Games, we’d love to hear a little about you. Who first got you into gaming? Which game turned you into a life-long fan? I’ve heard something about bunnies.

Ha, yes! Bunnies & Burrows was my first roleplaying game. I was a big Watership Down fan as a kid, so when my babysitter asked if I wanted to play a game where I could be a bunny, I thought that was the coolest thing ever. I didn’t really care what we did in the game, as long as I got to do Bun Fu by thumping my feet on the floor.

I played a lot of D&D in high school. It was very house-ruled, where we mostly just ran around in the woods and pretended to be our characters and once in a while someone rolled some dice.

Do you have a favorite genre or theme you like to run? How about to play in?

I like to run and play games that are heavier on storytelling than mechanics (but that hasn’t always been true; I used to love lots of tables and math). I think the genre and theme doesn’t matter as much to me. I read and write in a lot of different genres, so I appreciate lots of different styles of games. Horror is really fun if you have a good GM; it can be so scary and tense when you start worrying about the life and sanity of your characters.

Do you have a favorite archetype of character to play? Is it the same across genres?

I’m a neophile, so I really like to try new things and play lots of different types of characters. There’s an appeal to each of them that I really like. Sometimes it’s fun to get up close and punch things in the face. Other times, I want to make a character that is too afraid to get close to danger so they stand in the back and do damage from far away. 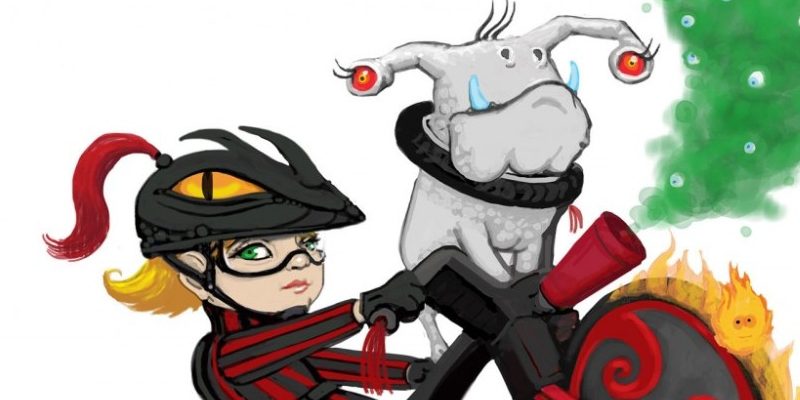 What made you decide to crossover from casual gamer to professional designer?

It was kind of accidental, to be honest. I was writing articles about gaming for publications like the World of Warcraft Official Magazine, and when Monte (Cook) started talking to me about this new game he was going to make called Numenera, the more he talked about it, the more interested I was in getting involved. When he brought me on as the editor, I couldn’t have been more thrilled. That was my gateway into game design, and I was hooked.

Monte Cook Games has had huge and well-deserved success over the past few years with the release of the genre-bending Numenera and The Strange. Numenera received no less than 10 ENnies in 2014, including Product of the Year, Best Setting, and Best Writing, as well as the 2014 Origins Award for Best New RPG. So first off, congratulations.

Thank you so much for the nice words! We’re really delighted that the games have been so well received.

As a father and life-long gamer, I’m a huge advocate for getting our kids gaming as early and often as possible. There aren’t many RPGs for kids under 10, so I’m incredibly excited about your current project, in fact, it was one of my Favorite Things in May.

Your new game, “No Thank You, Evil!” brings roleplaying with MCG’s Cypher System directly to younger kids and their families. Tell us a little about how that came about and why you are so excited about it.

We came up with the idea for No Thank You, Evil! after noticing that so many of our players were playing Numenera and The Strange with their families. We were reading all of these great blogs and play reports of families who were tweaking the setting and the rules for younger players—and we started thinking, “Wow, this is so great. There are all of these gamers who are introducing their kids to games and sharing these experiences with their families. Maybe we can help make that even better.

We’ve been working on it for about a year—doing research on developmental levels and kids’ games, looking into making the game assessable for children with cognitive and physical concerns, and then playtesting it with a wide variety of players. Watching them play—seeing them create characters and come up with really inventive solutions and get excited when they win the day—it’s just incredible. Their creativity and enthusiasm just blows me away. 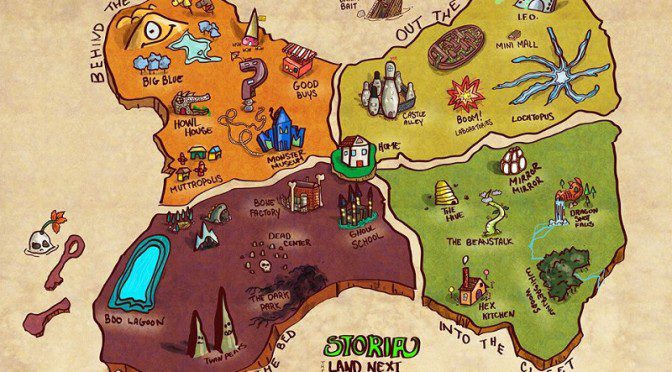 What are the key differences between the mechanics in your other Cypher system games and NYTE? [Review and overview of Numenera available at www.gameschangelives.com]

In many ways, the bones are still the same, but we’ve done a lot of work to make it so that young players can grasp it quickly and get right into the story. It was really about creating rules that made it easy for an adult (or older child) to run, while making sure that there was a lot of room for creativity inside those rules.

Tied closely into the mechanics is the world itself. We created a world, called Storia, that works the way kids expect the world to work. So you enter Storia from one of the magical doorways in your bedroom, and then you can do anything and go anywhere. There are fairy tales and knights and space ships and race cars and all kinds of cool creatures and people that you can interact with.

Creating a roleplaying game that can bring 5, 9, 12, and 40 year olds to the table is quite a feat. How do you scale the game to make it accessible to all age groups at the same time?

We did this by making the rules the same for everyone, while creating three levels of complexity for the character creation. Young players start with a simple sentence, so you’re a Princess or a Spy, then it gets more complex: You’re a Smart Princess or a Fast Spy. Finally, you’re a Smart Princess who Experiments With Science or a Fast Spy Who Bashes Evil. Each addition to the sentence adds another level of complexity and options.

When everyone plays together, one option is to give each player the level that suits their age and needs. Of course, the trick there is that if the older player gets the complex sentence, the 5-year-old is going to want it too. So we asked our playtesters to try that out: What happens if you pick the highest level that’s appropriate for the group, and ask all of the players to play at that level? Not surprisingly, the young players rose to the occasion. Rather than feeling confused or overwhelmed, they felt proud and excited to be playing at the same level as their older siblings. And we found that older players wanted to help the younger players “get” it. So it worked out even better than we were hoping.

You mentioned the research MCG has done to make the game more accessible and fun to a wide range of young gamers. Can you tell us a little about that?

It was really important to us to make a game that was accessible to as many players as possible. Gaming is such a great way to learn social skills, math, reading and writing, problem-solving, you name it… and we wanted everyone to have the opportunity to jump in and be involved. We researched some of the most common hurdles to gaming, including dyslexia, autism, and color-blindness, and then we started looking at ways to knock down as many of those hurdles as possible. We’re using easy-to-read fonts, designing pieces with colors and shapes that work well for players with color-blindness, and have created rules that reward players for participating in ways that work best for them.

NYTE has a Kickstarter going right now and funded in the first 48 hours. When is the closing date? At what levels can people contribute and what kind of stretch goals have you already hit? Can you give us some ideas of what stretch goals are to come?

We’re about a week out from the closing date right now. We’ve added an adventure book, re-useable character sheets, and a Hero Kit full of fun stuff like a poster map and a squirt toy. Next up are really cool character standups and a storybook called Lucy Lawful and the Awful Waffle—it’s great for introducing players to the world and it sets them up for their first adventure! 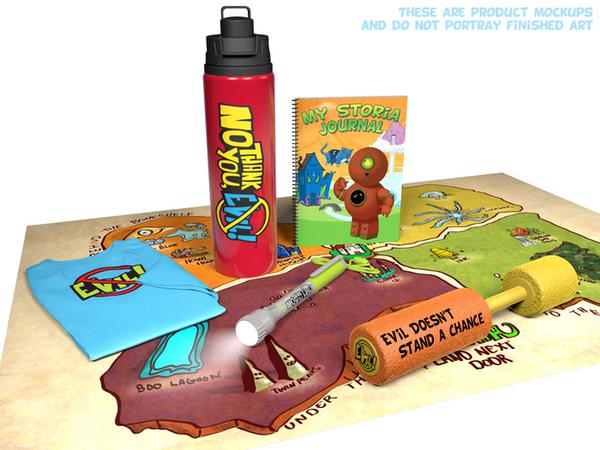 Life and the Future

Outside of game design, what other hobbies and interests do you have? I understand you are also a writer.

My first love is writing—which includes game writing—but I also write a lot of fiction. I just love stories, so in addition to writing and gaming, I read and watch a lot of TV and movies. We’re in such a fantastic era of sci-fi and fantasy books and shows!

I’m also a big walker and biker, and a gamer. To combine those things, I have a treadmill desk set up that I game on daily. Right now, I try to walk a few miles a day while leveling up my Dragon Knight in Elder Scrolls Online.

With all the incredible products coming out of MCG, how do you balance your time between work, family, friends, etc?

I find that if I can be the perfect amount of busy, I am really productive. Too little and I start futzing around and don’t get anything done. Too much and I get stressed and can’t work well. So I try to find the balance where there’s just a little bit of pressure, but not so much that I can’t work. And passion. I find that if I do what I love, it’s so much easier to fit it in, because I’m excited about it.

What are your Go-To games, or what are you playing now (RPG, board, card, whatever)?

Not surprisingly, we play a lot of Cypher System games, because we’re always testing stuff. We just played a superhero game using the Cypher System Rulebook that was tons of fun. I love a lot of games—I’m a big fan of Borderlands, Elder Scrolls Online, Gloom, Flash Point, and Ticket to Ride. But I also really love to learn new games; there’s something so exciting about sitting down with a game you’ve never played before and jumping into it with a group of friends.

Thanks so much for your time, Shanna, and I can’t wait to get “No Thank You, Evil!” on our family’s gaming table.

Thank you so much!