It’s A Kind of Magic 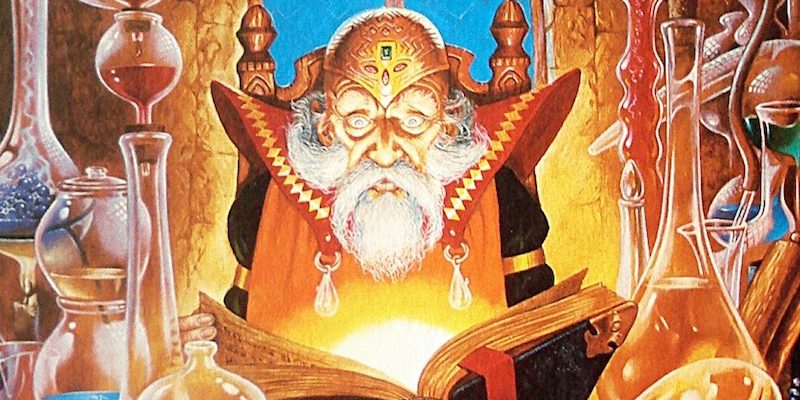 So you’ve decided to be a spell caster!

It’s a good career move with lots of exciting options and mystical powers to explore. When roleplaying, you’ll be able to use your magic to aid in searches, persuade others, deceive others, repair items, heal PCs and NPCs, speed your group’s travel, create food and water, and the list goes on and on. In combat, casting spells can be some of the most damage dealing actions in the game and they can also lend support to other characters in countless ways, especially healing. In short, spell casting is a huge part of what makes a game like D&D fun and exciting.

Now, when it comes to casting magic spells in D&D, there has always been the standard Vancian System. This system was inspired by a series of novels by Jack Vance known as “Dying Earth” or “Dying Earth World” and the original designers of D&D tried to emulate it as closely as possible. In order to be cast, the magic spells needed to be memorized by the spell casters and could only be cast once a day, or at least once between full rests. This is the method I first learned, as I’m sure most of you did as well, and the method that has survived through every edition of D&D so far. However, some folks may not realize that there are several other systems of casting magic available and some even specifically designed for D&D. What are they and how do they work? Let’s have look:

The Point Based System

Also known as the Mana System. Anyone who has ever played Magic: The Gathering or a Psionic class will know this system well. Basically, you have a set number of spell points per day/rest and all spells have a casting cost. Once you’ve spent your limit, you cannot cast any more without having another rest or waiting for another day. This system, much more than the Vancian System, allows the caster to keep their options open as to what spells they can cast, how many times they can repeat the same spell, and when they can cast it. The only real catch to this system is the difficulties that can arise from keeping track of your points especially when it comes to maintaining concentration with ongoing effects. It can also be fertile ground for dishonest players to “bend the rules” in their favor. Furthermore, it is important to note that sometimes this system is linked to hit points rather than separate spell points. That would mean cashing in hit points for spells and creating the dynamic that casting spells is so taxing on the body that it drains you of your very life-force.

The Event Based System

This system has two main branches: 1) events in time; and 2) situational events.

The Ability Based System

The ability based system is for characters that are born with, grow into, or are otherwise given a natural ability as opposed to learning it or being taught. The best example of this would be superheroes like Superman, The Hulk, Spiderman, and Wonder Woman. In this system, casters are able to use their abilities in almost unlimited amounts so long as they can keep themselves alive and healthy. In essence, every spell becomes an “at-will” spell and they require no memorization, book, item, or other focus because the magic is built into the character’s body. Now this system might seem a little over powered at first, but if you consider that the caster is probably stuck with the same three or four powers for the rest of his/her life, it becomes clear that they are sacrificing diversification of spells in return for unlimited use. In 5th Edition D&D, part of this system has been loosely adapted into the Sorcerer Class although it has been given a fair amount of limitations.

The Skill Based System

This system assigns a difficulty roll to every spell and the ability to cast it completely depends upon your good fortune with the dice. Thus, all the Wizard must do to cast the spell that they want is to hit the difficulty number by rolling a d20 and adding their Intelligence modifier. I’m sure that many folks can come up with their own system as to what the Difficulty Check should be for each spell, but the one that I’m most familiar with goes like this: DC = (15 + level of spell) – level of caster. Thus, when a 10th level wizard wants to cast a 5th level spell the DC would be (15 + 5) – 10 = 10. Or when a 2nd level cleric wants to cast a 1st level spell the DC would be (15 + 1) – 2 = 14. This system can be both exciting and frustrating. It’s exciting when you blast out three or four spells in a row and decimate a horde of enemies but frustrating when you go three or four rounds with nada and your party begins wondering why they keep you around.

The Component Based System

Going all the way back to AD&D, spell components have been described or at least listed for most spells. I know that some DMs enjoy making their players work with these strange and sometimes even goofy ingredients, but for the most part I’m willing to bet that most DMs assume that the wizard has them on hand or perhaps they are ignored altogether.  However, this system not only insists that the spell caster use them, but the caster and the DM are challenged to make the gathering of these components the only prerequisite for casting any spell. In short, if you have the ingredients, cast away! The upside of this system is it leads to a lot of searching and roleplaying for the caster to acquire the goods that they need. The downside is keeping track of the dozens of components required to keep a good range of spells at the ready and having the resources (or in some cases lots of coins) to acquire them.

No matter what system you choose to implement, I believe that the main goal should always be balance. No one wants to see a Wizard that can cast lightning bolts for days and who takes the challenge out of any fight. Similarly, no one wants to see a cleric that can heal so many hit points that none of the PCs fear death. Too much of a good thing is bad my friends. Experiment, adapt, and enjoy!