Elric can be found in the rare 1980 Deities & Demigods 1st printing. But after that printing, he was sadly removed. Chaosium has Elric in Dragon Lords of Melnibone RPG that’s a pretty cool d20 version of Elric! Dark Fantasy Roleplaying in the Young Kingdoms. Fortunately, I own all of three books, and so I’ve done a mixed bag in building Elric using with the AD&D Book and Chaosium books. But first some background on Elric, and his special items:

Elric was the last emperor of the stagnating island civilization of Melniboné. Physically weak and frail, the albino Elric must take drugs (special herbs) to maintain his health. In addition to herb lore, his character becomes an accomplished sorcerer and summoner, able to summon powerful, supernatural allies by dint of his royal Melnibonéan bloodline. Unlike most others of his race, Elric possesses something of a conscience; he sees the decadence of his culture, and worries about the rise of the Young Kingdoms, populated by humans (as Melniboneans do not consider themselves such) and the threat they pose to his empire. Because of his introspective self-loathing of Melnibonéan traditions, his subjects find him odd and unfathomable, and his cousin Yyrkoon (next in the line of succession, as Elric has no heirs) interprets his behavior as weakness and plots Elric’s death.

As emperor of Melniboné, Elric wears the Ring of Kings, also called the Ring of Actorios, and is able to call for aid upon the traditional patron of the Melniboné emperors, Arioch, a Lord of Chaos and Duke of Hell. From the first story onwards, Elric is shown using ancient pacts and agreements with not only Arioch but various other beings—some gods, some demons—to assist him in accomplishing his tasks.

Elric’s finding of the sword Stormbringer serves as both his greatest asset and greatest disadvantage. The sword confers upon Elric strength, health and fighting prowess but must be fed by the souls of those struck with the black blade. In the end, the blade takes everyone close to Elric and eventually Elric’s own soul as well. Most of Moorcock’s stories about Elric feature this relationship with Stormbringer, and how it—despite Elric’s best intentions—brings doom to everything the Melnibonéan holds dear. 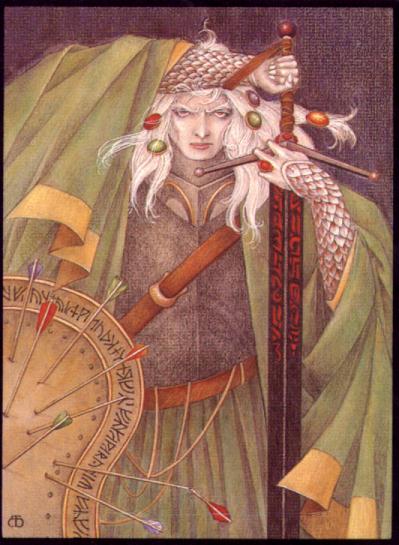 The Ring of Kings

This large ring, made out of a single rare Melnibonean Actorios gem, has three main functions: it acts as a ring of many spell storings into which Elric can place any spell or spells he wishes; the ring aids him, as the royal heir, in summoning creatures from other planes to help him, and the ring also resembles a rod of rulership in that, after calling on these, he can demand their assistance and expect to get it. Long ago Elric’s royal ancestors forged pacts with the Elemental Lords and many of the Master Types.

This huge black rune-carved blade is actually a chaotic evil sentient being from another plane which takes the form of a sword on the Prime Material Plane. Stormbringer is possibly the most powerful magic weapon possessed by a mortal anywhere. Any creature killed by Stormbringer has its soul or spirit as well as its energy sucked out and devoured. No creature so killed can be raised, resurrected, reincarnated, or brought back in any manner whatsoever. Stormbringer transfers its stolen life energy to Elric in the form of strength and hitpoints.

Stormbringer is in all ways evil. Its purpose is to eat souls, thereby damning them to a horrible eternal death. Sometimes, in battle, Elric and the sword go into a killing frenzy, and slay everything within range, including Elric’s friends, whose souls the sword particularly enjoys