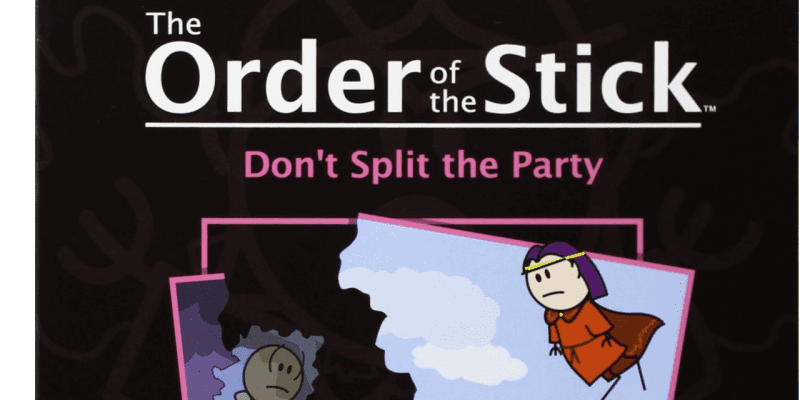 Last week I mentioned how Kat Kuhl from the One Shot Campaign podcast handles their party splitting, or when a PC is unconscious. I recently read several conversations on party splitting across my feeds that sounded something like this:

“How do you handle nights when your party is splitting up to accomplish personal interests? Two players have business in one part of the city, another has a profession they are working on and a couple others have NPCs they want to visit. I feel like I am doing an OK job of giving everyone their own turn but, I’m curious how other GMs might handle this?”

Every GM runs into this at one point or another. Some GMs feel comfortable jumping from group to group, keeping the action moving, skipping die rolls and “going cinematic” in non-combat scenes, or running two fights on two different maps as if they’re in the same room. Not every GM has honed those skills, and those who have don’t always have the energy.

If you’re party wants to split up, don’t stress. Let the players do the work for you.

If you’re lucky enough to see this a game ahead, jot down a few notes about the NPCs’ personalities, attitudes, and answers to key questions the PCs are likely to ask. Keep the notes short, no more than one or two quick sentences on personality and a couple bullet-points on answers. Then let the NPC player off the leash to answer non-plot-related questions however they like. Mediate any plot-related questions as you see fit, but try to let the player ad-lib as much as possible. Some of the best story elements will come from your players thinking out lout at the table. Let them.

What does disheveled mean in this case? Is he dressed like a homeless person? Is he finely dressed but haggard from stress? Is he normally clean-cut but was late to the meet due to a barfight? Who cares?! Let the player run with it.

On the Spot Splitting

If your players want to split up in the middle of a session to shop, meet with NPCs, or other non-combat related things, take the non-involved players aside (make sure this is no more than a 30-60 seconds): “Jim, you’re a surly old human merchant who hates dwarves and will jack up prices on them; say, 10-20% over list. Sue, you’re the merchant’s daughter who will do anything to piss off her father. Make up your own names.” When you get back to the table and your other players–say, an elf and a dwarf–go shopping, hilarity ensues (and you can grab a sandwich while you watch the fun).

Player unconscious or dead in the middle of a fight? Quickly write down the AC, HP, move, attack bonus, and damage of one of your monsters on a 3×5 card and have the player take over. Write only these stats down. This could be for one ogre or 10 orcs. Don’t worry about skill bonuses and other sundries unless they come up. For example, only tell the monster-player their Perception bonus if a PC is trying to sneak up on them, or their Dexterity save if a fireball gets thrown. Monster has a special attack? Just write Breath Weapon on the card. When the monster-player wants to use it, give him the stats.

Keep it simple and fast.

The downtime technique works just as well if one or more groups run into combat. Say your ranger and rogue want to scout the passageway ahead, while the wizard, cleric, and fighter barricade a previously explored room to rest in. The scouts stumble into a slide trap that dumps them into an otyugh’s trash pit. You have three players not doing anything, while the other two fight.

You could say that the others appear immediately; easy, but a strained solution and not very dramatic. Instead, jot down the stats for a few low-CR monsters that seem likely, skeletons or dire rats in this case, then have the players jump in to pound on their teammates. Depending on the level of your players, a few extra low-CR monsters won’t turn a fight into a TPK. After the skeletons are destroyed, the ranger and rogue are hurting, or the appropriate number of rounds go by, have the players’ real characters show up in the proverbial nick-of-time.

During Red Hand of Doom, my PCs made allies of dwarves, humans, and swamp elves who agreed to help defend a city being attacked by a monstrous horde. Instead of just saying “your allies help out around town,” I gave the players control of one human, one dwarf, and one elf unit at their location (see stat sheet below). Excessive rolls were cut down by having each NPC go down after one hit (4th edition minion rules), by replacing damage dice with straight damage, and by having the elf unit either fire at one target or make a single Area of Effect attack against a group.

Any player could command a unit by using their own actions to grant the unit actions (a bonus action and/or regular action could be used to give the unit any one of the three actions listed in the stat sheet) If no one gave a unit an order, I briefly described how the NPCs took down extra attackers who weren’t on the board–“A bugbear snuck through the buildings to flank you, but the human pikemen pin it against a wall, letting the elven archers riddle it with arrows.”

This approach gave the players the feeling that their previous actions had tangible results and made combat interesting without slowing it down.

The Most Important Thing

If you walk away with only one thing from this post, it’s this: Keep the Action Moving.

Here are a few tips and tricks

* = Though I give two examples of “timers” in this blog, pressuring your players with countdowns should be used sparingly, at best. Don’t count out loud. Don’t sing the Jeopardy jingle. Don’t hover. Calmly say, “I’m giving you about 5 seconds to make a final decision, then you’re free to go after the next person,” or “Here are your choices. Any questions? Cool. I’ll give you a few seconds before I roll the ninja’s damage.”

Action: entire unit makes either single target or area attack
Move: Unit moves as ordering PC wishes
Bonus: Target(s) speed reduced by 10 ft. until the end of their next turn if attack is successful.

AC: 18; HP: Minion (if they take 1hp from a non-area attack, pikeman dies. If they fail a save against an area damage spell, pikeman dies.)

Move 25 ft., able to flank and make Opportunity Attacks
Allies gain +2 shield bonus to AC and Dexterity saving throws if one or more pikemen are adjacent to them.
Pike: Reach, +6 to hit, 10 piercing dmg

AC: 17, HP: Minion (if they take 1hp from a non-area attack, dwarf dies. If they fail a save against an area damage spell, dwarf dies.)
Move 25 ft., able to flank and make Opportunity Attacks
Axe/Hammer: +7 to hit, 10 slashing or bludgeoning dmg

Action: One dwarf mercenary attacks an adjacent enemy
Move: Unit moves as ordering PC wishes
Reaction: If a dwarf dies, any PC may use their reaction to have the dwarf survive instead. Each dwarf mercenary may only benefit from this ability once per long rest.