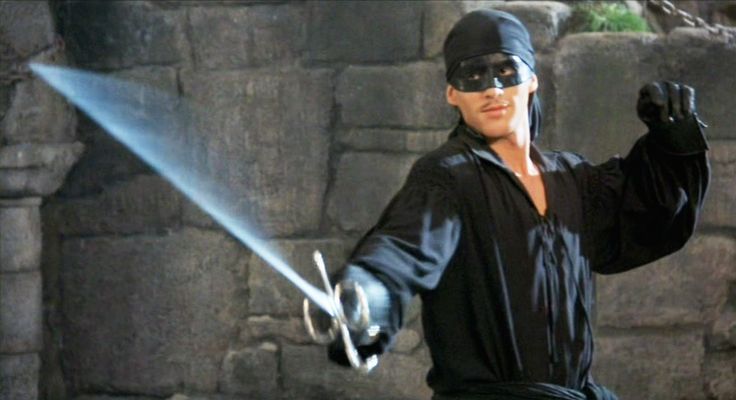 Historically speaking, there have been dozens of legendary sword masters from all over the world. Some examples include: Tsukahara Bokuden (1489-1571) who is accredited with winning 20 duels and killing over 200 men in several battles; Miyamoto Musashi (1584-1645) accredited with winning 60 duels and authoring The Book of Five Rings; Salvator Fabris (1544-1618) considered by many to be the greatest fencing teacher in history; Johannes Liechtenauer (c. 1500) was the father of the German style of fencing; and William Marshal (1147-1219) rumored to have beaten over 500 knights in various tournaments and dubbed “The greatest knight that ever lived”. However and unfortunately, these are not the great sword masters many people admire in today’s society despite the fact that, in my opinion, their deeds are worthy of study and respect.

Instead, many of us currently look to movies, novels, and video games for our sword master inspiration and, in recent years, we’ve been treated to a host of impressive examples. Many of these fictional sword masters are not only talented with their blades but also show a quality that I personally feel is essential for anyone who wishes to take on the responsibility that comes with the mantle of “master”: restraint. While all of these sword masters are deadly and do not hesitate to strike when the need arises, they also exhibit a high level of patience and control. They fully have the ability to pull back their killer instinct and allow those who do not deserve their wrath to escape unharmed. This is what I believe makes the difference between someone who is great and someone who is legendary.

In roleplaying and especially in D&D, it is important to have role models for your characters. Not necessarily to make carbon copies of or plagiarize, but to inspire and to motivate. So, in an effort to inspire and motivate you, here are my top six sword masters from popular culture: 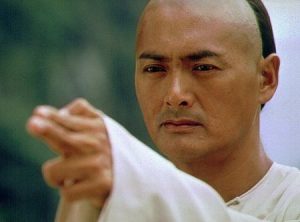 Wonderfully played by Chow Yun-fat in the 2000 Academy Award winning film, Li Mu Bai is an older swordsman who, after spending years chasing after his master’s killer with nothing to show, finally decides to retire his sword (The Green Destiny). However, the sword is quickly stolen and the resulting investigation reveals that Li Mu Bai’s nemesis, Jade Fox, is behind the theft. The eventual showdown between the two sword masters is quite possibly the best sword work ever filmed. Also, from a D&D character perspective, Li Mu Bai is a wonderful role model for any character to emulate because his motivations are both strong and selfless. His greatest goal is to simply avenge his fallen master and bring justice to a deadly criminal. To me, there is something very attractive in the purity of that path and I would love to see a character in one of my games follow something similar.

#5 Link (The Legend of Zelda Series) 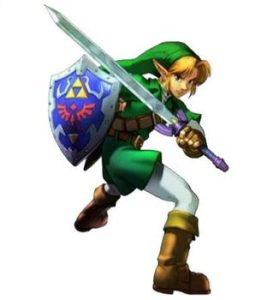 With more than 16 games under his belt and character appearances in over a dozen more, Link is Nintendo’s most prolific character next to Mario. The original game, which debuted in February of 1986, sold over 6.5 million copies and has been awarded the “Highest-Rated Game of All Time” by Guinness World Records. But, looking past his popularity, Link has been one of the most relatable and accessible “sword master” characters over the past thirty years. In almost all of his incarnations, he is depicted in the beginning as a youth or young adult with low-level sword skills. As the games progress, Link eventually gains access to better skills, more powerful weapons, and more unique techniques to meet the challenges of the more difficult foes. Part of what makes the Zelda series so addictive is how the player can grow and shape an average scrappy youth into a focused and highly skilled sword master. This is not unlike the thrill of taking a 1st level character in D&D and, with luck, guiding them into a 20th level legend. In both of these examples, the fun is in the journey and not with the end result. 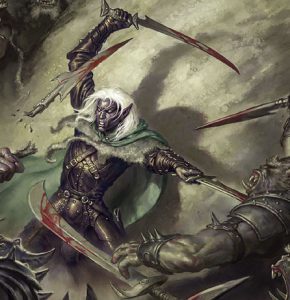 Quite likely the most popular character in the entire D&D pantheon, Drizzt is the brainchild of R.A. Salvatore and had his first appearance in the novel The Crystal Shard (1988). At the time of this writing, there have been 18 novels in the Legend of Drizzt series and every last one has made the New York Times Best Seller list. Unfortunately, his popularity and his natural ties with the D&D world have also made him the most emulated and plagiarized character in D&D history. I doubt there is a single experienced DM out there that has not encountered a Drizzt clone character at one time or another. This is both flattering and cliché and while I’ve listed him here, quite rightly, as a role model; I would encourage players to look deeper into the character than his Drow background and his duel-wielding style. Instead, why not try to emulate his good nature and acceptance of others born out of his fear of not being accepted himself; emulate his willingness to do anything for his companions and fight for their causes without hesitation; and also emulate his profound self-reflections and self-criticisms personified by the monologues written by R.A. Salvatore throughout the series. 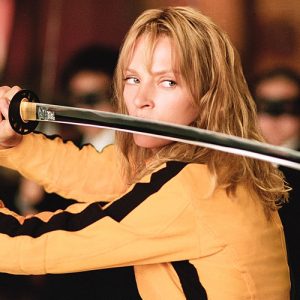 When the Quentin Tarantino two-part movie came out in 2003 and 2004 respectively, it presented a story of revenge, justice, bloodlust, and swordplay the likes of which we had only viewed before in the world of Japanese animation. Add this to the fact that the lead character was a woman and the story definitely turned some heads. Beatrix herself, played by impressively versatile Uma Thurman, became the living embodiment of “a woman scorned” as she fought her way past several henchmen and henchwomen on her ultimate path to kill her former lover and handler, Bill. And yet, despite all of the rage and wrath, Beatrix still has moments when she reaches lines she will not cross. She still shows her internal emotions frequently and lets the pain out whenever she has a moment to breath. It is this duality and this complexity of character I love to see in my games. Far too often I see players try to build “perfect” characters when I’d much rather see them build “damaged” ones like Beatrix. 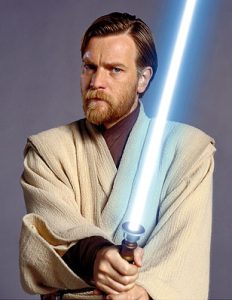 Say what you want about the prequel trilogy, I still found the lightsaber battles to be top-notch and the character that best exemplifies the skills and talents necessary to pull them off are found in Obi-Wan Kenobi. From the skirmish in Episode 1 against Darth Maul, to the last clash against Anakin in Episode 3, and even to include his sacrificial fight against Vader in Episode 4, Kenobi is, in my opinion, the best Jedi we’ve seen to date. He is also one of the best examples I can conjure of the character willing to put it all on the line for his ideals and his comrades. The character of Obi-Wan has always inspired my D&D characters to put their necks out on the line when necessary and when my fellow characters need the help. I hope he does the same for a few of you out there.

#1 The Man in Black/Westley (The Princess Bride) 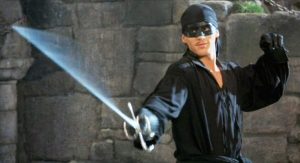 It is my hope that you’ve seen the fencing scene between Inigo Montoya and The Man in Black at least once in your life. If not, you can find it HERE.

Isn’t that wonderful? Many have called it the best sword fight in film history and I usually flip-flop between this one and the one mentioned previously in Crouching Tiger, Hidden Dragon. But here are a few things about that scene that you may or may not know: 1) The fight sequence was choreographed by the famous Bob Anderson who also worked on such movies as Highlander, The Empire Strikes Back, Return of the Jedi, and The Lord of the Rings Trilogy; 2) All of the dialog in the scene that mentions attacks and defenses are historically accurate; 3) Elwes and Patinkin started practicing their fencing months before shooting (3 to 6 depending on the source) as both men had never fenced before; and 4) One section of the fight had to be improvised on the day of shooting due to a bad camera angle. The two actors and Bob Anderson re-choreographed it during a 20 minute break. But, leaving the real world behind and looking at it from more of a story-line perspective, I think it is one of the best examples of how a character can be both confident and humble at the same time. The Man in Black knows that he is the better fighter, probably from the first few moves, and yet he holds back because his aim is not to destroy his foe or even hurt him. Instead, he aims to earn the respect of his challenger and have that respect returned. A very fine goal for any D&D character to achieve and another example of how being a legend is often aligned with both patience and mercy.