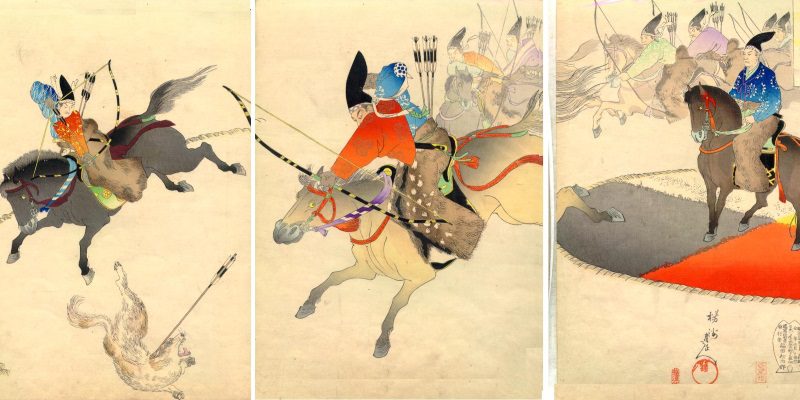 Okay, let’s get back to the History of the Classes, now that I’ve had a little while off and have recharged my batteries. As you know if you’ve been reading Tribality and/or dnd.wizards.com lately, WotC recently released the first five levels of an alternate Ranger class as an Unearthed Arcana playtest. (Unearthed Arcana is my favorite thing that Wizards of the Coast has done since the release of the core rulebooks. I heart the messy process of design, and I don’t care who knows it.)

The ranger class first put in an appearance in an article in The Strategic Review, slightly before the dawn of recorded time. (Yes, people were writing about D&D before they wrote about world history – priorities, folks.) Thank God for the internet: it’s still available. There are some serious problems with Joe Fischer’s article, but to be fair to him, tabletop game design had been invented about twelve months earlier and no one knew what they were doing yet.

Okay, spellcasting starts at 8th level. Not just clerical spellcasting; rangers alternate levels of clerical and magic-user spellcasting until, at 13th level, they cast spells as a third-level cleric and third-level magic-user. The article is brief enough (as they all were in The Strategic Review) that there’s no room for flavor text explaining this feature, but I guess it’s a broad-band way to cover every trick that Aragorn could possibly be interpreted as using? And in D&D, elves use magic-user spells…? It’s a stretch, for sure.

The fact that Ranger-Lords (that’s 9th level, for those of you unfamiliar with OD&D/1e level titles) can use items of clairvoyance, clairaudience, ESP, telepathy, telekinesis, and teleportation is pretty open to interpretation. Is it because they have first-level magic-user spells? Maybe. A tangential reference to Aragorn and the palantiri? I honestly don’t know if that’s a stretch or not.

This earliest ranger introduces the damage kicker, one point per character level, against creatures of a certain type – in this case, the “Giant” type, which for reasons surpassing my understanding is the category term for all land-dwelling monstrous humanoids, I guess? All it says is “Kobolds – Giants,” but in 1e, Gygax will clarify that to spell out a list of all the monsters that apply, and it is indeed just about every land-dwelling biped that isn’t a human, dwarf, elf, or halfling. At the highest levels, this damage kicker is more egregious than that found in 3.5e, while monster hit points are much, much lower, so this really is a defining advantage, and applies to enough targets that it is immensely useful and probably completely unfair, unlike the later iterations of this ability.

Okay, let’s get on through some of the other features:

But wait! There are also punitive restrictions, important to mention here because they’re going to survive nearly-unaltered all the way into 2e.

As a parting shot, the ranger’s level title at 2nd level suggests that Aragorn was not the high-level badass that one might have been led to believe.

So… what strange beast is this? A good number of the mechanics do continue forward, but in the context of some of the other abilities and restrictions, there’s a whole different spin on the class. The varied magic and magic item use, vow of semi-poverty (“vow of the middle class” is especially ironic given that Ranger-Lord title), and Intelligence and Wisdom ability score requirements suggest to me a nature-loving monk or something.

Oddly enough, I checked the Rules Cyclopedia to see if there’s a Ranger there. There isn’t, but the Mystic, which is absolutely a monk, shares a handful of abilities with this Ranger.

Restricting the damage kicker to intelligent, non-player-race humanoids, but granting it for all of them, actually works here – and I’m sufficiently steeped in why this was a problem in later editions that I confess I’m surprised. In this iteration of the Ranger, though, it assumes a world in which humanoid tribes of various kinds are a town’s or kingdom’s number-one threat, and rangers are the solo or duo border guards. It’s not a universal enough theme for later editions, but in the highly human-centric OD&D, it kinda works.

Mearls talked about the three faces of the Ranger as Skirmisher, Wanderer, and Guardian. Those are all present here, to be sure – respectively, the surprise bonus, the tracking ability, and the extra hit points and favored-enemy damage. There are also abilities that don’t signal any of those in a clear way; here I return once more to the oddities of their spellcasting and magic item use. Ever since I first read this, I’ve wanted to see a 5e ranger that expands on the faint implication that rangers are psychic and draws on the feats of woods-craft that Crocodile Dundee both hints at and explains away.

Notable absences: not a pet class, can wear heavy armor without penalty, and no concept of a restricted fighting style. Outdoor adventuring is not yet a major part of the class, possibly because the designer doesn’t think it will be a major part of the game.

If you have war stories from playing an OD&D Ranger, I want to hear them! Next week, I’ll be covering the 1e Ranger and its lesser-known, non-magical alternative, released in the DMG.