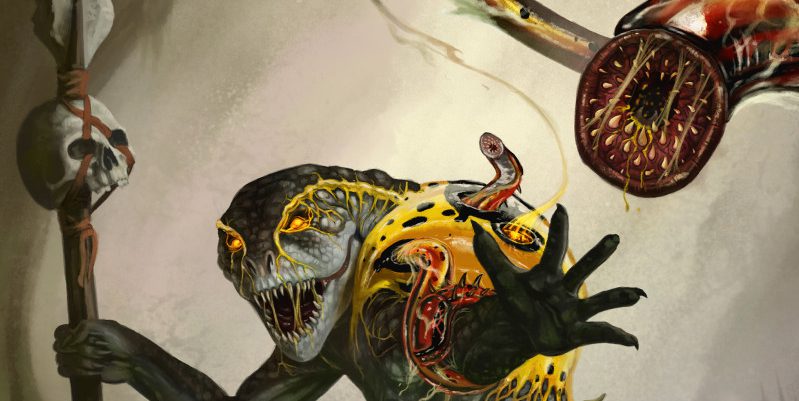 Inhuman creatures from other dimensions are classic horror tropes. As are temptations of power that encourage the protagonists to walk the line between good and evil. The Host are inspired by the creatures in the classic horror film, “From Beyond“, while their Host Spawn disease is built to tempt the infected creature to give in to its power.

The eel-like creatures known as the Host originated from a twisted plane of inhuman hunger and madness. How they crossed the boundary between their home plane and the Ethereal remains a mystery, but luckily their numbers remain small.

The Hosts themselves are ethereal beings, floating through the Material Plane unaware of its inhabitants until one of them makes their presence known. Often the hosts’ victims are arcane researchers, alchemists, or theologists experimenting with forbidden forces, but no living creature is immune. Magic surging along ley lines may allow the Host a glimpse into the Material world, making any living creature a potential victim.

Creatures that fall prey to the host are called the infested. The host sees through the creature’s senses and fills its mind with knowledge few can fathom. It then begins to multiply. Those who can see invisible objects or into the Ethereal plane will notice an armored, hive-like growth, typically on the creatures back or chest. This growth becomes the host’s home as it breeds.

The innate spellcasting gained by the infested is in actuality the host’s spawn being sent to affect a target. The hosts’ link with the infested, as well as its spawn, allows the infested to ignore the need for concentration on its innate spells. When an infested’s spell expires, the ethereal spawn dies.

Any creature that fails their saving throw against an infested’s dominate beast or dominate person spell must make a Charisma save against the infested’s Intelligence-based save DC, 24 hours after the spell’s duration ends. A failed save means the target gains Host Spawn disease. A creature affected by more than one of these spells in a 24 hour period makes only one save 24 hours after the first spell’s duration ends.

The personality of those infected by Host Spawn are slowly overridden by the creature growing inside their body. Unlike typical parasites, the spawn does not have a physical form and cannot be affected by non-magical disease treatments. While infected, the target can hear the ancient memories of the spawn echoing through its mind, tearing at the target’s personality.

Saving throws against the disease continue until six saves are failed, at which time the disease ends, the creature gains the Infested template, and its consciousness is subsumed.

A successful save removes the most recently gained benefits (including increased Intelligence), though the increased DC to resist remains the same. Once the infected creature returns to its normal state, it gains 1 level of exhaustion and the disease ends.

Host Spawn at your Table

The infested template and Host Spawn disease are ideal for one-shot Halloween-themed horror games, though folding them into a long term “Invasion from Beyond” campaign can be incredibly satisfying. Unlike most other diseases, the more saves the infected creature fails, the more power they gain. This is designed to create moments of “if I fail one more save, I may have enough knowledge and power to defeat the evil!”

DMs are encouraged to make the PC’s initial saving throw against Host Spawn in secret. Keeping the infestation a secret and hinting at the disease’s effects slowly over time can build the tension. Allow the affected PC to gain advantage on a few key Intelligence checks, exhibiting knowledge about things they’ve never known before. If the knowledge is helpful to their immediate task, the PCs may not question this “divine intervention”. After a few failed saves, the PCs will realize the PC is gaining access to knowledge they couldn’t possible know as well as a new-found and unnerving presence; whether that presence is intimidating or charming is up to your DM or group.

If the PCs weren’t able to see the host or the host’s spawn during the fight in which the PC was infected, it may take them awhile to cast detect poison and disease or similar spells. It’s recommended to allow Medicine checks to understand that what is happening is similar to a parasitic disease, but the DC should be very high (25 or more).

DMs are also encouraged to fold the disease’s “black outs” into their storyline in classic ways, allowing the players’ out-of-character horror-movie knowledge to plague them. Revealing the PC’s “blackouts” only after the disease has progressed for several days or more can build inter-party tension. Is there a serial killer at work in the city that the PCs now suspect is one of their own? How were they ambushed at a key moment in a heist when they thought no one else knew their plan? Is the spawn secretly working with the big bad in your campaign, undermining the actions of the heroes while they sleep? Is the spawn twisting the PC’s bonds, flaws, and desires into brutal reality?

Parties with easy access to spells and effects that automatically remove diseases (including paladins) may decide to ride the disease to its limit. Make sure to increase the duration and consequences of the PC’s blackouts to encourage hard choices. Should the party decide to remove the disease immediately, you may want to put obstacles in their way that require the knowledge the disease offers. Each time a PC is infected with the disease after the first, increase the number of spells or effects required to remove it by one.

Any living creature of Small to Huge size can become infested, including beasts and aberrations. Once infested, the creature’s skin, fur, or scales appear sickly for its type and its eyes flicker a dim red in the darkness.

When a creature becomes infested, it retains all of its abilities except as described below. Creatures with legendary or lair actions may retain them, or gain new ones at the DM’s discretion.

Ability Scores. The infested creature’s Intelligence score increases to 14 if it is less than 14.

Otherworldly Senses. The infested creature gains blindsight to a range of 30 feet and may see creatures in the Ethereal plane up to 30 feet.

Languages. The infested creature gains the ability to speak and understand the language of aberrations if it did not already.

We are Legion. The infested creature gains advantage on Intelligence, Wisdom, and Charisma saving throws and ability checks. 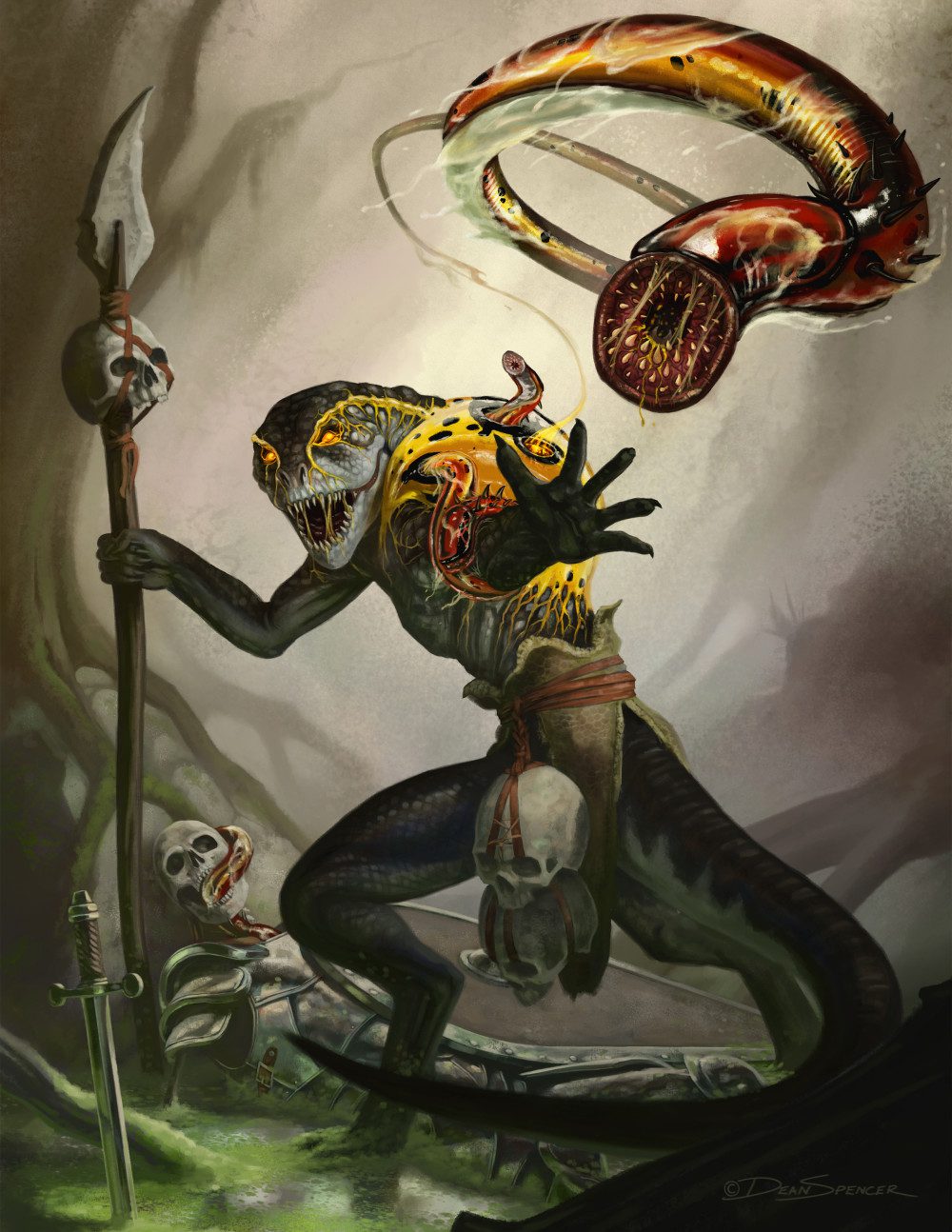 The Top 5 Most Inspiring Female Fantasy ...