Lifestyles of the Rich and Famous PCs 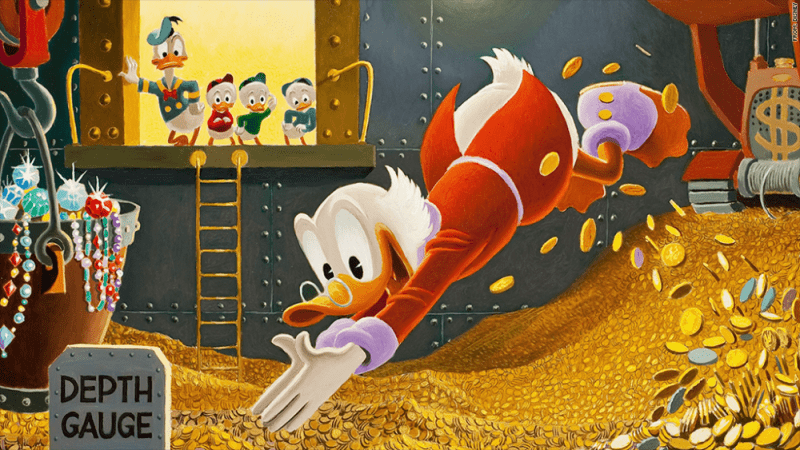 Either as a player or a DM, have you ever reached the point where the party’s money was going out of control? I know that some DMs are very strict with their treasure and can be stingy with their coin, but I’ve seen others that lavish their players with mountains of gold, gems, and valuables, so much so that the encumbrance rules are often bent if not broken. Judging from what I’ve seen and what I’ve played, I fall somewhere in the middle. I often give my players very small amounts of coin in the early levels and gradually increase the flow as their experience grows.

But if you play a character or a campaign long enough, sooner or later money is going to become a secondary thought. Hundreds of silver coins become hundreds of gold, then thousands of gold, then dozens of gems, and eventually you have just as much treasure as the greediest dragon. It can become an actual embarrassment of riches and even reach Scrooge McDuck levels. So what do you do with it? If you are a DM that has handed out massive amounts of treasure to your PCs and they are just hoarding it all, what can you do? Well it’s time to play Pimp my Character! Here are five of my best suggestions for using up mass amounts of money (in no particular order):

Now I know there are more than a few DMs out there that will say, “buying magic items cheapens magic and makes the world less wondrous”. And I’ll admit, those are really good points. But I honestly look at it like this: if there was magic in our world, the first thing someone would do is figure out a way to sell it. That’s human nature! Now I can easily fathom Elves and Dwarves having a taboo against selling magic, especially magic that is special to them or is designed only for other members of their kind. But Humans, Halflings, and many of the other races are, in my book, going to get their hands on what magic they can and make a profit. So when a PC has the total GDP of a small island nation in their Bag of Holding, I like to entice them with a few items, potions, and magical weapons for sale. And, if you’re wondering how I price my items, I often refer all the way back to the original Unearthed Arcana (circa. 1985).

Another fine way to spend the monthly income of Bill Gates is to construct a stronghold. These fine structures of earth, wood, metal, and stone can serve as your base of operations and will allow you to give back to some of the local people as you will become their employer and liege lord. Often to start the process of building a stronghold, PCs must perform some great service for a King or other high-ranking noble to be given an area of land to both build upon and oversee. Then they must hire builders, engineers, and grunts to get the job going. And let me tell you, raising up your own little Camelot or Winterfell is no cheap prospect. Thankfully, there have been two wonderful books on the subject and both go into great detail. The first was The Castle Guide (1990) for 2nd Edition and the second was the Stronghold Builder’s Guide (2002) for 3rd Edition.

Ah yes, it’s Monopoly – D&D Edition. And while it might not be everyone’s cup of tea, I can easily see some of my PCs getting a kick out of buying up real estate and businesses and setting themselves up as the Kingpin (is Queenpin a thing?). But naturally, this all depends on what kind of character you have and how they are aligned. A lawful good Wizard is going to purchase a few businesses and shops to improve the town or city he/she is in and become a contributing member of the community while a neutral evil warrior is going to buy up every weapon shop in town to jack up the prices and save all of the really good items for him/herself. In either case, and for all of the cases in between, buying up larger business interests can lead to some very interesting places both financially and in terms of roleplaying. Using up the money to buy these things will be just the beginning, managing them and keeping them running will be the rub.

Sometimes the best way to spend the group money is to expand the group. And I’m not just talking about simple folk that you hire right off the street. I’m talking about leveled NPCs that can fill any number of roles depending on what you want/need. Maybe your group is missing a Rogue or a Cleric. Why not hire one out? I often charge my PCs 20gp per day, per level to rent an NPC. That means that a 5th level Cleric would charge 100gp a day and an 8th level Rogue would charge 160gp per day. And there might also be extra charges built into their contracts if they have to use a potion or a scroll for instance. In addition, my rental NPCs also come with a life insurance clause that says if they die while in service to the PCs a premium of 10,000gp must be paid out to the late NPC’s next of kin. If that isn’t incentive to keep an NPC alive, I don’t know what is! Finally, I know that running two or three extra NPCs can be a real pain for the DM, but the opportunity here for roleplaying and plot devices are almost unlimited. Maybe after the NPC is hired they turn out to be a spy for the main baddie; or maybe they had a role in one of the PC’s back stories; or maybe they will turn tail and run at the first major sign of trouble; or any number of other interesting outcomes!

My last suggestion for spending massive amounts of gold is to go full 1970’s Elton John. I’m talking about the finest clothes, jewels on everything, golden carriages, thoroughbred horses, servants, and wine and dine with the best of them. Living out the millionaire life in D&D doesn’t happen too often, but I can see where this might actually be a part of some elaborate storyline. Perhaps your PCs need to infiltrate the inner circle of the noble families of a city or to gain revenge on the higher ups for previous wrongs like in The Count of Monte Cristo. Or maybe you just want to experiment and see how well your usually “hack and slash” group would perform as well-to-do stuck-ups. For a change of pace, it could be really fun!