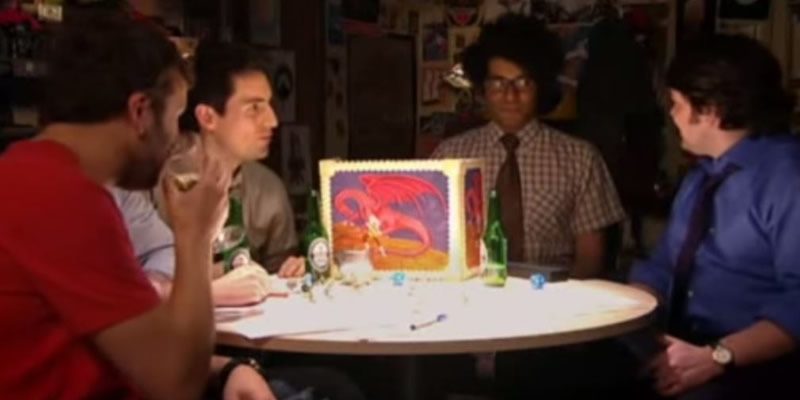 Here’s a guest article by Anthony Jennings that looks the physical space in which we play tabletop RPGs.

Not everyone is fortunate enough to have a room dedicated to gaming with bookshelves overflowing with rulebooks and reference materials, drawers of miniatures and terrain, and a custom made Sultan Gaming Table.  Sometimes, we play in loud game stores where we can barely hear the GM, at kitchen tables trying not to disturb our roommates or parents, or sitting on the floor of a cramped dorm room and rolling dice on the backs of our books.  Regardless of where a session takes place, the GM and players should consider how to best use that space and what accommodations are necessary for a great session.

More often than not, a session of Dungeons & Dragons or other RPG takes place around a rectangular table whether that is a kitchen table or the table at a gaming store.  Because of the rectangular shape of most tables where the GM sits can affect whether or not the players can hear the GM and vice versa.

If the GM sits at the head of the table, some players will be seated much further from the GM than others, especially if a player sits at the foot of the table.  Much like in a classroom, where a person sits can determine how involved they are.  Everyone remembers the student who sat in the front row of every class and was always involved.  Everyone also remembers the disinterested student in the back row.  The same is true at the gaming table.  The further a player sits from the GM, the harder it is for that player to hear and be heard.  While some players may prefer to be less involved than others, the GM should take into consideration where she sits and where the players sit.

The GM could also sit in the middle on one of the long sides of the table and be centrally located amongst the players.  She is now at the center of the gaming table and equidistant to all the players.  However, this seating choice puts two players at the opposite ends of the table, and they may have trouble conversing with each other. In this spot, the GM must also worry about infringing on the space that players need.

The GM brings a lot more material to a gaming session than the typical player.  She will often have several books, notes, maps, perhaps a published adventure, a notebook to take more notes, pencils, dice, a dry erase board and markers or scrap paper for scribbling down initiative order and damage that enemies have taken, and so on.  Players, on the other hand, usually have just their character sheet, dice, a pencil, and maybe a small notepad.  Because of all the stuff the GM brings to the table, she may not have much choice in where she sits.  The head of the table may be the only spot with enough space for the GM and her materials.

Game mats, 3D terrain, or scale maps are indispensable accessories for people playing RPGs like Pathfinder that require accurate representations of tactical movement.  No other accessory takes up more space, however, than game mats or terrain.  They can literally cover the table.  Once the mat is unfurled and spread across the table, the amount of space remaining for the players and GM shrinks.  The GM must also have access to a wide assortment of miniatures or cardboard stand-ups to represent the PCs and their antagonists.

Some GMs like to use 3D terrains to provide further immersion such as those offered by companies like Dwarven Forge or printed cardboard terrain offered from a variety of companies.  As beautiful as these terrain pieces may be, a GM should consider the available space before she chooses to use her gorgeously painted terrain and miniatures.  Just how big is that dungeon?  Is the table large enough to accommodate all of that terrain?  Will enough space remain for players and their character sheets?  Is there enough space to roll dice?

The GM must also consider how she is going to transport terrain, mats, and minis to and from the gaming space.  The choice to use a game mat or 3D terrain pieces is not only a question of space on the table but also a matter of space around the GM’s seat.  Large boxes of miniatures and terrain can be bulky and unwieldy and take up space on the floor next to the GM’s seat.  The GM should consider whether or not the map, terrain, and other accessories are a necessity or just something that she prefers to use.

No RPG accessory is more iconic than the game master’s screen. Many GMs don’t give a second thought to using a screen and often use them out of habit, tradition, or because the GM is supposed to have a screen.  Ostensibly, the GM uses one because it provides a variety of tables and other information to help the game run more smoothly.  The GM also uses the screen to hide her notes and rolls from the players.  As a physical barrier, the GM’s screen sections off part of the table and creates a zone for only the GM and her materials.

The GM should ask herself a few questions before deciding to use a GM screen.  First, is the table large enough to accommodate a screen?  Second, how often does she refer to the information on the screen?  Third, does she actually need to hide her dice rolls from the players?  Some games, such as Fantasy Flight Games’ Star Wars:  Edge of Empire, require that all dice rolls including the GM’s rolls be made in the open.  Finally, is she using the screen simply out of habit or because it’s expected?

The players’ level of control over the atmosphere of the gaming space can vary.  Some of us play in public spaces like a gaming store or a community space that others share.  The room may be very loud and the GM is forced to shout over the noise, or the space may have rules about loud noises forcing everyone to whisper.

If the game takes place in a private space, such as someone’s house or apartment, the players have more control over the environment.  They can use lighting to enhance the mood of the game.  A darkened room lit by black lights or candles can add an eerie quality to an adventure in the Underdark or a lich’s tomb.

Music can complement the experience.  The GM can select background music that adds excitement to combat encounters, such as the score from Conan:  The Barbarian by Basil Poledouris.  In modern settings, the GM can simulate the atmosphere and mood of different scenes through careful choice of background music.  The GM can also give some NPCs their own theme music.  What would a Star Wars RPG be without the Imperial March playing when Darth Vader arrives?

The next time you sit down at the game table, take a look around the table and see how things everything is laid out.  If you’re the GM, where do you sit?  Why do you sit there?  Do you really need that terrain or the game mat?  Is the GM screen helping, or is it hindering communication between the players?  What can you do to improve the atmosphere of the game?  Instead of taking the space where the game takes place for granted, consider how the space can be best used to offer a better experience for everyone.

The image used for this article is from an episode of the IT Crowd where they play D&D.