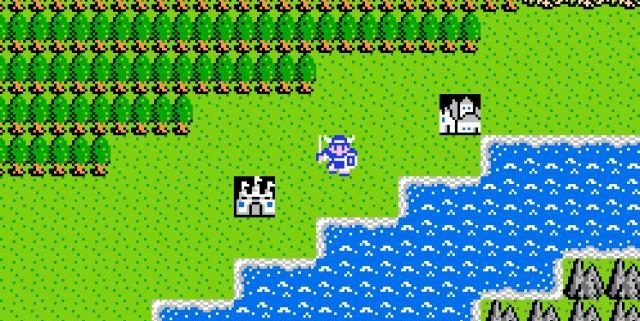 Up until today, almost all of my studies and articles in roleplaying have focused on Tabletop RPGs such as D&D, Pathfinder, Star Wars, and so forth. But I believe that the time has come to branch out a bit further and so begins my two-part series on the early days of Home Video Game RPGs or HVGRPGs.

It’s interesting to note that the worlds of Tabletop RPGs and HVGRPGs developed at practically the same time. While Tabletop RPGs came out of the gate first in 1974, they really didn’t pick up major speed until the early 80’s when HVGRPGs were already starting to make their first appearances. This would mean that both mediums have been feeding off of each other from almost the very beginning and each no doubt owes a lot of credit to the other. So, with that being said, why don’t we step away from the roleplaying table for a short time and delve into the wild wild world of HVGRPGs.

However, before I get started, there are a few distinctions I have to make. The first distinction is the fact that I’m going to talk about Home Video Game Consoles such as Atari, Nintendo, and Sega and not the RPGs that you would have seen on home computers such as the Apple II, Commodore 64, and eventually Windows computers. In my experience, very few kids had access to computers in the early days, except at school, while almost everyone had a video game system of some stripe. The second distinction I need to make is the difference between when games were released in Japan and when they were released in North America. Quite often, especially with Nintendo releases, Japan was always the first to get a game and sometimes by as much as three or four years in advance. For the purposes of this article, I will be listing both release dates but giving the original (often Japan) release the priority. The third and final distinction I want to convey is the fact that I’m leaving out a few titles on purpose because either a) they don’t come off as a real RPG game to me; or b) they were extremely unpopular/obscure and had little impact on RPG history.

Also, in order to begin telling the history of HVGRPGs, I need to define what games actually count as RPGs. To be fair, calling any game on the Atari 2600 an RPG is a bit of stretch. However, everything has to start somewhere and even these early game attempts have their charm. So here are my three basic criteria necessary for a game to be dubbed an RPG: 1) You play a central character or group of characters in an ongoing storyline and have to make in-game decisions that have clear consequences; 2) There are ways of tracking your life via hit points, hearts, life bar, etc., as well as a way to track your experience via exp. points, ability improvements, health improvements, spells, and so forth; and 3) The game has major elements of exploration and combat along with a clearly defined goal that the player must accomplish to end the story. And, even with these three criteria in place, I can still see the argument that Super Mario Bros. could technically be an RPG or Mega Man. But in most cases, I believe that gamers can tell the difference between what is and what isn’t an RPG. When all else fails, trust your gut.

And now for the games!

This game was, arguably, the very first HVGRPG, and if you watch the YouTube video you will quickly see that we had some very humble beginnings. But still, many of the basic elements we still cling to today are there such as collecting gold, collecting items, having hit points, taking damage, exploring a map, and using spells. It’s really not hard to see how games like Dragon Quest/Dragon Warrior and Final Fantasy came into existence with this game as the foundation.

This series was based around Atari’s most ambitious contest and therefore one of their greatest flops next to ET. That’s right, back in the day they made games to fit a contest rather than a contest to fit a game! However, the concept was both simple and unique. Atari was going to produce a set of four Sword Quest RPG games, one based on each of the four elements. Each of these four games would then be subject to a worldwide tournament where the best players would have a shot at winning four grand prizes (one for each game). For Earthworld, there was the “Talisman of Penultimate Truth” a golden pendant. For Fireworld, there was the “Chalice of Light” a goblet of gold and jewels. For Waterworld, there was the “Crown of Life” obviously a golden crown. And for Airworld there was the “Philosopher’s Stone” which was a gem encrusted paperweight. All four of the items were valued at $25,000.00 USD each at the time of the contest which would make them almost triple that amount in today’s money. However, shortly after the third game, Waterworld, was released, Atari suffered a financial collapse and never finished the contest or released the fourth game, Airworld. For more details and a great summary of all of these games, see Episode 88 of The Angry Video Game Nerd. (YouTube link provided above)

Bokosuka Wars (1983 for the Sharp X1 Computer and later ported in Dec. 1985 to the Nintendo Famicom)

So while I’m not getting into RPGs on home computers, there were a few that had their beginnings on home computers and then later made their way to consoles. Of these, Bokosuka Wars is a great example. While you may not have heard of this game, after all it was only on the Sharp X1 in North America and then released only in Japan on the Nintendo Famicom, it inspired many of the gamers and RPG designers that played it. It was the very first HVGRPG to use a group of main characters, rather than a single character, and to have each character unique with individual abilities.  It is also credited with being the very first “tactical” RPG game which would lay the ground work for dozens of games to come like Might and Magic and Warcraft.

The Tower of Druaga (June 1984 Arcade and later ported Aug. 1985 in Japan for the Nintendo Famicom)

Sometimes games would also make their way over to consoles via the arcade. (Oh yeah, The Arcade! I remember them!)  Such was the case with The Tower of Druaga. This game was immensely popular in Japan and its combination of roleplaying elements and real-time action paved the way for future classics like Gauntlet and The Legend of Zelda. It also brought over the concept of a dungeon crawl to console gaming.

Dragon Buster was one of the first HVGRPGs to really incorporate the elements of a side-scroller into their design and it led to some interesting places. It was the first game to have a double-jump and the first game to offer a real-time life meter. It was also the foundation for several other side-scrolling HVGRPGs such as The Legend of Zelda II: The Adventure of Link and Faxanadu.

Sort of like The Tower of Druaga on crack, Gauntlet was one of the most popular arcade games of all time. In one nine-day period, an arcade operator here in Canada was quoted as saying his lone Gauntlet machine had taken in $4500.00. That’s more than 2000 plays! Also, more than 7800 arcade cabinets of Gauntlet were sold worldwide. Not too shabby. However, Gauntlet is on the very cusp of what I would consider an HVGRPG, as it has many of the elements but is also missing a few such as experience points and a clear storyline. Maybe it is an RPG and maybe it isn’t, but either way it was both fun and it garnered the “fantasy” genre of games a lot of exposure and attention.

The Legend of Zelda (Feb. 1986 in Japan for the Nintendo Famicom Disk System and Aug. 1987 in North America for the NES)

The game based on a legend that would eventually become a legend itself. The Legend of Zelda or NES Zelda or Original Zelda or Zelda 1 was nothing short of a masterpiece and is, in my opinion, the best game ever made for the Nintendo Entertainment System. For the first time, a HVGRPG put it all together: a great storyline with lots of history and depth; a main character with the ability to improve and grow; an action based combat system, elaborate dungeons, unique monsters, tricky puzzles, a decent soundtrack, and a wonderful world to explore and learn. It was also the very first NES game in North America to offer an internal battery that allowed players to save their progress. (Yep, before this game everything had to be played as a one-shot.) And it should really go without saying but this game became the 2nd best selling game of all time for the NES (next to Super Mario Bros.) and was given the title of “Highest Rated Video Game Ever” by Guinness World Records.

Dragon Quest/Dragon Warrior (May 1986 in Japan for the Nintendo Famicom and Aug. 1989 in North America for the NES)

And to round out the first five years of HVGRPGs, we have Dragon Quest (Japan) / Dragon Warrior (Americas & Europe). Coming out a full three years earlier in Japan than anywhere else, the Dragon Quest series was a massive hit and propelled RPG software company Enix into superstardom. Unfortunately, the game took a great deal of time to move over into North America and by the time it did, it came off as a bit outdated and was quickly overshadowed by Final Fantasy. However, it was still a great game and perhaps as close as anyone got to replicating D&D on a console in the first five years. It would also go on to spawn a whole series of games that are still being released today.