One of the funniest and most entertaining actual play RPG podcasts out there is The Adventure Zone. The Adventure Zone comes to us from the McElroy brothers of the My Brother, My Brother and Me podcast. Griffin McElroy takes the reins as the Dungeon Master for the first time and with his brothers and dad, they jump into the adventure from the D&D 5th edition Starter Set, Lost Mines of Phandelver. I was hesitant to listen at first when I learned that they were going to play Lost Mines of Phandelver. 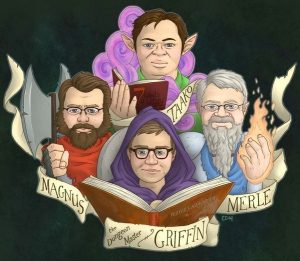 I’ve read the adventure and played it so many times, but the game quickly diverted into Griffin’s own campaign after the first session. Improvisation at it’s best! The game started recording at the very beginning of D&D 5th edition back in 2014, so you get to listen to them all learning 5th edition rules as the game progresses just like we all did. Even though Griffin has gone his own direction with the game after starting the stater set, the campaign still continues in the Forgotten Realms with sightings of Neverwinter in winter. But has the additional touch of trains, hotrod races, secret spy organizations, elevators, real world Candlenights, and fan submitted magic items, but alas there are still no tacos. Yet.

Their dad Clint McElroy and brother Justin McElroy had never played D&D but as you listen, you can tell they quickly start enjoying themselves, and learning the game. The player characters are Merle Highchurch the dwarven cleric played by Clint, and Taako, a wizard elf in search of creating Faerûn’s first taco, is played by Justin. While Travis McElroy has played a little 4th edition, and he takes on the role of Magnus Burnsides, a human fighter.

I can not say enough good things about this podcast. It is energetic, witty, entertaining, and hilarious. Each player brings a great addition to the game, and you have 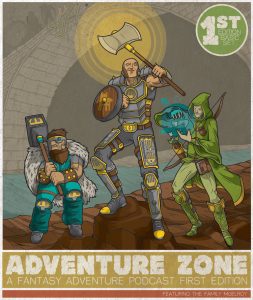 sweet baby brother Griffin adding an ingenious background and world full of adventures for them to play and have fun. Each of the non-player characters have their own personality as Griffin weaves his magic storytelling along with their own voice and brings them to life for us. This is a great podcast to listen and see some old school roleplaying. That’s because everything is theater of the mind, as they are separated by living in three states, California, Texas & West Virigina, and play remotely. I do have to warn you though, that there is some profanity, but it is minimal so I would rate this PG-13 if it were a movie. Which it’s not, it’s an improvised story told by 4 dudes that takes place in a cool fantasy world.

The Adventure Zone releases a new episode every two weeks that you can see on iTunes at The Adventure Zone: iTunes, or check out their website here: The Adventure Zone to download the MP3 or listen directly from the website. They are currently in Chapter four with 32 episodes, but you can catch up very quickly. You can listen to the first episode here:

Ep. 1. Here There Be Gerblins – Chapter One

and you can also listen to their first stab at playing D&D on My Brother, My Brother and Me that started the Adventure Zone here:

My Brother, My Brother and Me: The Adventure Zone

Give it a list and let me know what you think. 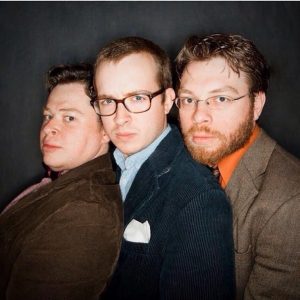 The McElroy brothers have many other podcasts that they produce along with many other people on Maximum Fun. There are so many current Maximum Fun podcasts, that I went ahead and put together a list with descriptions for you guys to check out. It was a lot of copying and pasting, so Thank me later. There is also a link at the bottom of the page for all of the McElroy’s projects, and here: McElroy Shows.

Baby Geniuses: Baby Geniuses is a show for people who know stuff and people who don’t know stuff, but would like to. Every week, comedian and super-genius Emily Heller and cartoonist and mastermind Lisa Hanawalt, challenge their guests to share some knowledge on any topic they want.

Bullseye: Bullseye is a public radio show about what’s good in popular culture. With a keen editorial eye, Bullseye sifts the wheat from the chaff, and brings you hot culture picks, in-depth interviews with the most revered and revolutionary creative people and irreverent original comedy. Bullseye is equal parts funny and fascinating. Whether you’re already plugged in to the culture map, or looking for a signpost, Bullseye will keep you on target.

Bunker Buddies: Join Andie and Travis every Wednesday as they take on every single Apocalypse scenario they (and you the listener!) can think of! They’re not preppers, they’re comedians so it’ll probably get pretty silly. So, hunker in their bunker and let’s survive this thing together!

Can I Pet Your Dog?: Every Tuesday, dog owner Allegra Ringo, dog wanter Renee Colvert, and producer Travis McElroy talk to guests about their dogs, discuss dogs they met this week, and brief you on dogs news. They go on assignment to dog events and report back with what you need to know. If there’s a dog, they’re gonna pet it

The Flop House: The Flop House is a bi-monthly audio podcast, devoted to the worst in recent film. Your hosts (Elliott Kalan, Dan McCoy, and Stuart Wellington) watch a questionable film just before each episode, and then engage in an unscripted, slightly inebriated discussion, focusing on the movie’s shortcomings and occasional delights.

Getting Curious: A biweekly exploration of all the things Jonathan is curious about. Come on a journey with Jonathan and experts in their respective fields as they get curious about anything and everything under the sun.

International Waters: International Waters is a pop culture comedy quiz show where land laws do not apply. Join host Dave Holmes and competing teams of world-famous comedians from the US and UK in a hilarious and lively test of pop culture knowledge (and the ability to make up baloney when that knowledge fails). It’s part panel show, part trivia quiz and all laughs. It’s also a little embarrassed it wrote that last sentence.

Jordan, Jesse, Go!: ordan, Jesse, Go! is a freewheeling comedy podcast about life in your twenties and everything else. Your hosts are Jesse Thorn, “America’s Radio Sweetheart,” and Jordan Morris, “Boy Detective.”

Lady to Lady: Comedians Barbara Gray, Brandie Posey and Tess Barker welcome a fourth funny lady to the table each week to bring you gut-busting debates over current events and pop culture, along with a healthy dose of embarrassingly hilarious personal revelations. Springing from the hit live talk show at the Upright Citizen’s Brigade Los Angeles, Lady to Lady brings the laughs with visits from weirdo recurring characters & on-the-fly theme songs – making it one of the most unique and ridiculous ways you can spend an hour.

My Brother, My Brother and Me:My Brother, My Brother and Me is an advicecast for the modern era featuring three real-life brothers: Justin, Travis and Griffin McElroy. For roughly five-sixths of an hour each week, with new episodes dropping every Monday, the brothers McElroy will answer any query sent our way, each fielding questions falling into our respective areas of expertise. We operate like a streamlined, advice-generating machine. It’s both terrifying and humbling to behold. If you’re in desperate need of a bit of advice, don’t be shy! Simply send an email to mbmbam@maximumfun.org, or post on twitter with the tag #MBMBaM and we’ll take care of that for you.

Oh No, Ross and Carrie!: Welcome to Oh No, Ross and Carrie!, the show where we don’t just report on fringe science, spirituality, and claims of the paranormal, but take part ourselves. Follow us as we join religions, undergo alternative treatments, seek out the paranormal, and always find the humor in life’s biggest mysteries. We show up – so you don’t have to. Every month we share a new investigation, along with occasional bonus interviews and updates.

One bad Mother: One Bad Mother is a comedy podcast hosted by Biz Ellis and Theresa Thorn about motherhood and how unnatural it sometimes is. We aren’t all magical vessels! Join us every week as we deal with the thrills and embarrassments of motherhood and strive for less judging and more laughing.

Pop Rocket: Pop Rocket is a high-octane weekly discussion of the culture we all love to love. Join host Guy Branum and panelists Wynter Mitchell, Oliver Wang and Margaret Wappler for smart, funny, sometimes sweary chat about everything great in entertainment. Combining comic, journalistic, academic and digital media expertise, the Pop Rocket team will keep you up-to-date on what’s most exciting in pop culture this week.

Sawbones: Dr. Sydnee McElroy and her husband Justin welcome you to Sawbones: A Marital Tour of Misguided Medicine. Every Friday, they dig through the annals of medical history to uncover all the odd, weird, wrong, dumb and just gross ways we’ve tried to fix people over the years. Educational? You bet! Fun? We hope!

Schmanners: Join husband Travis McElroy and wife Teresa McElroy every Friday and they’ll improve your etiquette week by week! Perplexed by thank you notes? Baffled by black tie? Dismayed by dinner parties? Worry no more, Shmanners has your answers! Tune in every Friday on MaximumFun.org!

Still Buffering: Join real-life sisters Sydnee McElroy (Sawbones) and Rileigh Smirl as they help bridge the gap between the teenagers of yesterday and today. “How do you party?” “What do I do with all this hair?” Still Buffering has the answer.”

Throwing Shade: Hosts Erin Gibson and Bryan Safi take a weekly look at all the issues important to ladies and gays… and treat them with much less respect than they deserve. Can you handle it?

We Got This: Every week, Mark Gagliardi and Hal Lublin take the dumb issues in life that people care strongly about and settle the argument once and for all. No topic is too small or insignificant for them to dissect and decide! Whatever minutiae you argue with friends and family, don’t worry: We Got This.