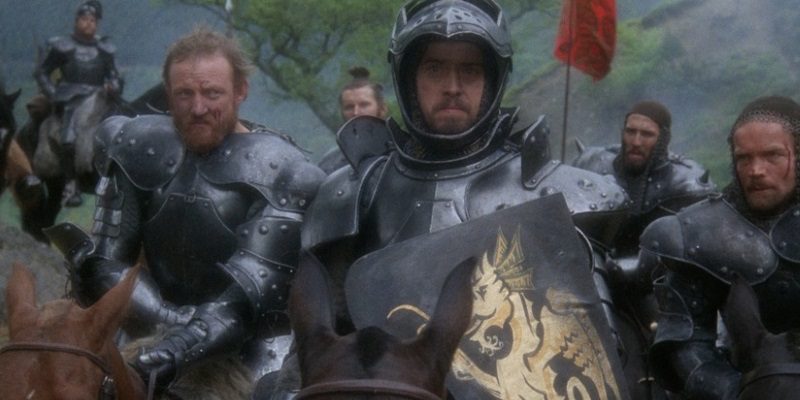 A few weeks ago, my esteemed colleague wrote about PC headquarters and home bases in campaigns. Talking to him about it afterward got me thinking about building new domain-management rules for 5e, taking the best parts from the huge list of other tabletop roleplaying games that have included domain-management elements. To do this, of course, I need to study everything, and as I do that, I might as well turn it into something other people can read too.

There are a lot of games to draw from here, and some of them are more difficult or expensive to track down than others. No promises on which ones I’ll cover in the course of this series, though each edition of D&D will get at least some coverage – including a discussion of how to make 4e’s skill challenges do some of this work.

Written by Frank Mentzer in 1984, Companion presents detailed, useful rules for domain management in a feudal world that has been somewhat adapted to the needs of gameplay. Apparently, I also need Mentzer’s Expert rules, which… just isn’t happening, sorry. I’d have to sell body parts to get it from eBay. Unfortunately, that’s where one finds the costs for stronghold construction. Curse you, Mentzer! On the other hand, it looks like the dominion rules in Rules Cyclopedia, from 1994, is very near to a copy-paste job of Mentzer’s work, so I can draw on that and assume I’m not far wrong. (But for now, I’ll treat that as a separate article.)

Anyway. Mentzer establishes “dominion” as his general term for domains. A dominion might be anything from a “small tower on an acre of land” to “a mighty empire with thousands of people.” Each of the game’s four classes has its own approach to dominion play. This element of Companion’s rules is particularly interesting from my later, Birthright-focused perspective.

The player tracks four stats for a dominion, while a fifth might be handled by the player or the DM – clarity is obfuscated by the passive voice being used. Hiding this stat from the player is probably more trouble than it’s worth. The density of stat-tracking is one of the points of comparison that we’ll see most often in this series.

This looks like a lot to track when written out like this, but in comparison to other systems, it is laughably small and thus quite appealing. You could fit all of this into the margin of your character sheet, probably!

There are five ways to enter dominion play, and the way you get your dominion makes a meaningful difference to the rest of your advancement and your interactions with neighbors.

There are some straightforward rules about effects of terrain and level of civilization. In contrast to other rule sets that I’ll get to eventually, like Dungeon World, Mentzer assumes the existence of a quite detailed hex map, which is completely reasonable for anyone who has just finished writing D&D Expert the year before. The baseline rules for the number of families in a hex can amount to a whole lot of money in the Income step, if you make the odd mistake of giving a PC a civilized area; on the other hand, it’s completely reasonable to assume that PCs (being adventurers) are going to get stuck with borderland or wilderness hexes.

Every hex of a dominion has 1-4 (weighted toward 2) resources, which might be animal, vegetable, or mineral. It’s interesting that, for all the emphasis on terrain type and relative earning power, terrain doesn’t create an upper bound on the population a hex can support – for example, there’s nothing in the text blocking a city in the desert. The one other resource I wish these rules had taken into account is Cultural – for example, a major pilgrimage destination (which would boost income even after the Theocracy’s rake) or the like.

One of the great things about Population is that it can go up on its own. The numbers are a little improbably high for a per month rate. If nothing else, it shouldn’t take too long to go from Wilderness to Borderland.

There’s a lengthy set of rules around proper social interaction that I really appreciate. I don’t think I’ve seen anything this detailed in any other work of this sort, though I assume King Arthur Pendragon has mind-bogglingly detailed rules for this, which I never saw because I was a player in the one KAP campaign I’ve been involved in.

Guests, Holidays, and Tournaments are the three big areas of interest in the dominion ruler’s social calendar, which seems about right. All of them are quite expensive, and a very welcome balance to all that Income. A Royal Progress in which the king crashes on your couch for three days with his three uncles (all of them Dukes) sets you back a cool 3,450 gold, before you consider holding a tournament in honor of the king’s presence. Oh, and if you don’t pay this, you’re committing treason. Good times! Holding a well-attended tournament carries a pretty sweet payout in XP, at least.

I’m glossing over the details of resolving tournaments. The short version is that I’ve seen a lot of ad-hoc rules for tournaments over the years, and these are some of the sanest, given their underlying rules engine. There’s even a leaderboard title progression for tournament winners.

Next up is the nuts-and-bolts of Confidence Level, which is a fairly involved but navigable chart. The most important thing is to do whatever it takes to keep Confidence at 150+, on a 500-point scale. That’s low enough to be a problem, but it’s not yet a self-perpetuating nightmare. The maximum starting Confidence Level is 358 (“Prosperous,” which is phenomenally good), but realistically you’re starting somewhere in the Average or Steady (260s-280s) values. As long as you do everything you’re supposed to do and act decisively against any negative Natural or Unnatural Events, you can probably maintain this level for the length of a career. Finances are everything, though – if you can’t pay for a lavish tournament, things go to Hades in a hurry. This is a pretty good way to make sure the PCs keep looking for lucrative adventures, that’s for damn sure.

There’s a table for what happens when a ruler gets replaced. The table’s results are perplexing – peasants already in rebellion are more likely to rebel against a new ruler, while peasants who love their ruler are likely to react favorably to having their ruler replaced. I don’t get what Mentzer was going for here, but it’s interesting that there are rules for insurgency, here and in the Confidence Level chart. The other odd thing, though much better for bookkeeping, is that you have one Confidence Level for your whole dominion, rather than one part of your territory going into rebellion while others are reasonably happy. Obviously, the DM can make that happen, but it’s not intrinsic to the text.

The random events tables are very bare-bones, and their application is a bit unclear, but it wouldn’t be hard to reorganize this into something more usable.

The section ends with a page on noble titles, progression up the ladder, forms of address, and alternate forms of governance. Other than Founding actions, PCs probably start as Barons, with one stronghold and the hex it’s in. Viscount is the next step up, and requires that you acquire a Baron as a vassal through some means. Jumping from Viscount to Count requires Conquest; likewise jumping from Count to Marquis. Any further addition entitles you to become a Duke, and that’s where you stop unless you can finagle blood kinship to the King or adoption as a Prince.

This more or less concludes the dominion rules; for the purposes of this series I’m avoiding mass-combat rules. In reading Companion, I’ve been pleasantly surprised with the sense of pageantry and verisimilitude that Mentzer created. He successfully emphasizes that more power means more problems, though potentially a very fun kind of problem to have since it’s just a game. If you don’t like general management of finances, this system won’t be for you; if you’re okay with managing some columns of three- to five-digit numbers (the latter only in the case of larger dominions), this is pretty good stuff. There’s a little intrigue, a little church-versus-state bickering, nods to the fantasy milieu, and a huge set of adventure hooks. I think the rules could use a little more thought on the impact of arcane and divine magic in dominion rulership, but I’m very much influenced by Birthright on that point.

The other thing I see here, much as we’ll later see in King Arthur Pendragon (and probably a lot of systems), is that the rules are at their most dynamic and challenging when you have the smallest area of control. Once you have 2-3 hexes in a dominion, unless they’re all wilderness, life gets a lot easier, because the pageantry costs for visiting nobles don’t scale with dominion size. The cost of Holidays, and therefore also Tournaments, do scale up as your dominion expands, but unless you’re granting more Holidays than you are obliged to, or an excessive number of Tournaments, you should still be in the black. The XP reward also scales up pretty sharply, and I begin to understand how campaigns could approach the massive XP totals necessary for top-end play (for example, a magic-user needs 4.35M experience points to reach 36th level).

There’s one more thing in Companion that I must talk about, even though it has almost nothing to do with the dominion rules. Dwarven, elven, and halfling dominions have their own super-magical crafting processes that are not intended for PC participation. Dwarves have a special forge and elves have a special tree; this is literally the least surprising thing ever. Halflings, though… they have a crucible of blackflame that can un-burn incinerated items and weave a web of shadows that collects moonlight into an oil. An ounce of this oil, when applied to any fabric, causes that object to fly when exposed to moonlight.

I can’t help but wonder if this was part of the inspiration for Birthright’s halflings, which are native to the Realm of Shadow and have magical shadow-travel powers. The only other thing I can come up with is that these halflings were under Sharkey’s rule for a long age, finally throwing off his rule but preserving some of his magical lore.

In Part Two of Domain Rulership, I’ll move on to the Rules Cyclopedia, where we’ll see some of the construction-cost rules that I’m missing here, and I might even press on to 1e. (If you’re waiting with bated breath for the next article in the Fey series, I’m not abandoning you – I’ll probably be alternating between the two topics, and I hope I can find ways for domain rulership to inform the work I’m doing with the fey.)