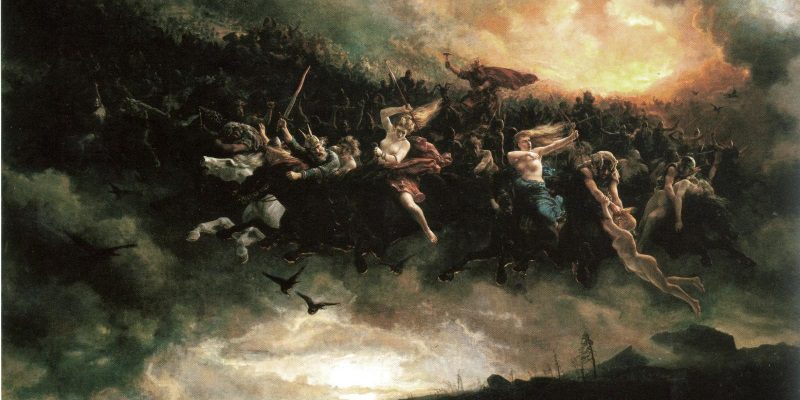 A few weeks ago, I wrote about fey knights and the general dearth of worthy fey opponents in the 5e Monster Manual. This week, I present the fey huntsmen that lead the Wild Hunt and their beasts, the leashed terrors. If you need a foundation in the mythology of the Wild Hunt, Wikipedia is here for you. I’m going beyond the core of that myth to propose game-able goals for the Wild Hunt and Archfey that might control them. Because of the themes of fear and death, I’m mostly associating the Wild Hunt with the Unseelie or Winter Court, but in other settings I’ve seen it presented as something closer to an independent force of nature, separate from the Courts.

The fey huntsmen who carry out the Wild Hunt are lesser servants of an Archfey, usually one of the Winter Court. They pursue prey in the material world and in the Feywild, sometimes shifting back and forth between the two in an eyeblink to gain ground in the chase. They always return to the Feywild at the rising of the sun.

Fey huntsmen exult in the joy of the hunt and the terror of their chosen prey. They run or ride at night, when mortals quake in fear behind locked doors. Many fey huntsmen carry trophies of their most notable kills, or else bear hunting horns of power and distinction.

Some few huntsmen serve the Summer Court, and hunt those who have particularly offended their Queen. Often this includes the undead, owing to an ancient grudge between the Queen of the Fey and the first and darkest lord of the undead.

Unearthly Cavalcade. Fey huntsmen and their leashed terrors generate a cacophony of horns, baying, thundering hooves, jangling of tack, and the like far in excess of their numbers, as they are accompanied by many more of their kind just on the other side of the veil between the material world and the Feywild.

Portents of Doom. Every culture that knows anything of the Wild Hunt speaks of it as a portent of doom, perhaps even able to snatch away the souls of those who hear its passing. Certainly the Wild Hunt is most active when the Archfey turn their attention toward mortals, and that is seldom to the benefit of the latter. If you find yourself the quarry of the Wild Hunt, it is said that they cannot pursue you onto holy ground. Survive until morning, and they may forget about you the following night.

A trophy of the great beast or horn of the wild hunt is almost always ruined in the course of a battle, or sundered upon the death of its bearer. One who proved true courage, enough to stir the heart of even a merciless and cruel fey huntsman, might be rewarded with such an item from the huntsman’s own hand. They are wondrous items that require attunement. Please note that the trophy of the great beast is not balanced for PC use, and you will want to consider adjusting its effect, while the horn of the wild hunt is useless to most PCs and should have its effect changed to something reasonable.

The leashed terrors that serve fey huntsmen as trackers, or that guard the palaces of Unseelie nobles, were once mortals – human, dwarven, or any other kind of humanoid. The glamour of the Unseelie causes them to take the shape of their own darkest terrors. (Those whose darkest terrors are ill-suited to hunting or war are given… other work.)

This fey magic is bound to them in their collars, clasped about their necks. This clasp is vulnerable to determined effort, but the leashed terrors are sure to punish those who fail in the attempt.

Many leashed terrors look vaguely canine or lupine, while others take the shapes of any kind of great predator, or even a nightmarish mix of features that have never existed on a single creature in nature.

Always Hungry. Fey huntsmen feed their leashed terrors only enough that they still feel the pangs of their hunger, for they want them to be as aggressive as possible. The leash and collar make sure that the terrors come quickly to heel.

The Mortal Within. It is still possible to free the leashed terrors from the magic that holds them. Many of them crumble to dust the moment they are released, as the weight of too many centuries destroys them. The rest will surely struggle with the memories of their time as a beast of the Wild Hunt.

If a PC were to fall victim to the Wild Hunt, it is possible that the fey huntsmen would not feed him or her to the leashed terrors, but instead bind a collar around the PC’s neck. A PC who has become a leashed terror might be freed by another PC, traded between Archfey, or even free herself, if she were presented with things that strongly reminded her of her mortality. Few NPCs have the strength of character to achieve such a thing.

The Goals of the Wild Hunt

What motivates the fey huntsmen and the Wild Hunt? Here are a few ideas.

These two creatures should pair together pretty well. I miss the lock-and-key way that 4e encounter design worked, where one creature’s abilities fit perfectly with those of another creature that it made good story sense to pair them with. I’ve tried to do that here, especially in the fey huntsman’s spear attack. I could have been more precise about calculating appropriate amounts of damage and CR for these creatures, but in my own game I try not to sweat it too much, and I hope you’ll see it the same way.

A Visit to the Shadowfell – Shadar-kai ...