Swashbuckling Enemies and Allies from the Three Musketeers 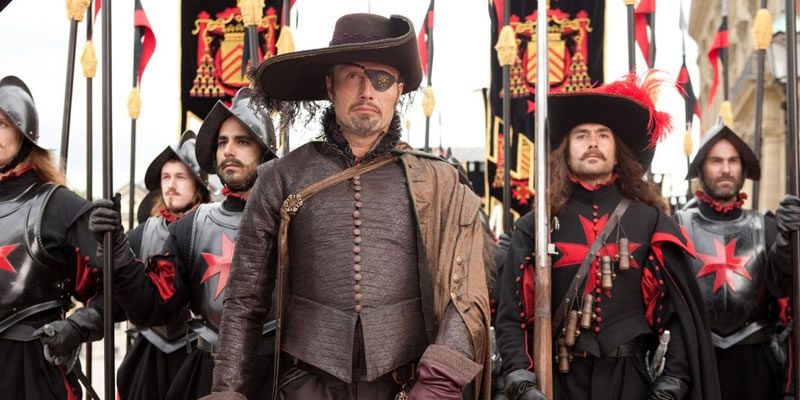 It’s not surprising The Three Musketeers has been filmed so often. Alexandre Dumas’ novel has action, intrigue, romance, comedy, tragedy and colorful characters right out of history. Last week I built 5 swashbuckling inspired PCs. This week on the Campaign Trail, I thought I would provide some ideas for NPCs villains and allies for your next swashbuckling adventure.

Rochefort is a powerful adversary and skilled swordman, serving the Cardinal using his sword. While on the road to Paris, d’Artagnan and Rochefort had an exchange, ending with d’Artagnan swearing to seek his revenge. Rochefort is an excellent underboss/lieutenant for the Cardinal, letting his swordsman fight the Musketeers while he is safe in the palace. Plus, Rochefort is usually portrayed with an eyepatch and awesome hat.

The Cardinal employs many, many guards. The Cardinal’s Guards should be easily defeated by your swashbucklers and there are plenty of them. Compared to Guard (CR 1/8) in the Monster Manual, this is a much tougher opponent. The stats below are for a somewhat tougher and mobile guard, but you can:

These characters can be used to fill out your cast. You can use the Commoner, Noble or even Spy stat blocks found in the Monster Manual as a base and then bump up Charisma, Intelligence or whatever matches their personality. Add some skill proficiencies in too.

Duke of Buckingham.
A handsome and charismatic man who gets his way and was a true superstar of his time. While he is a skilled swordsman, his conquests are conducted through seduction, not battle. His courtship of Anne of Austria gets her in trouble and sees Buckingham fall right into the plans of the Cardinal.

Cardinal Richelieu.
The King’s chief minister, who plots against the Queen in resentment at having his advances rebuffed or to simply gain control of France. The Cardinal is highly intelligent and charismatic and is very skilled at intrigue.

King Louis XIII of France.
Usually portrayed as a fairly weak monarch being manipulated by his chief minister.

Queen Anne of Austria.
The unhappy Queen of France and a central figure in the plot.

Constance Bonacieux.
The Queen’s confidante and a love interest of d’Artagnan who rescues her from the Cardinal’s guard.

Monsieur Bonacieux.
Constance’s husband and would be collaborator of the Cardinal.

Kitty.
The servant of Milady de Winter who dislikes her mistress, and adores d’Artagnan.

John Felton.
An officer assigned to guard Milady, and while warned about her ways, he is nonetheless seduced and assassinates Buckingham at her request.

Planchet.
The brave, intelligent and loyal servant of d’Artagnan.

Grimaud.
The servant of Athos (a strict master) and is only permitted to speak in emergencies, communicating mainly through sign language.

Mousqueton.
The servant of Porthos and like his vain master enjoys the fine things in life.

Bazin.
The servant of Aramis who waits for the day his master will join the church, as he has always dreamed of serving a priest.

I like building characters inspired by my favorite characters onscreen. Check out other character builds such as the Fantastic Four, Avengers and Guardians of the Galaxy.

Treasures of the Fey Market