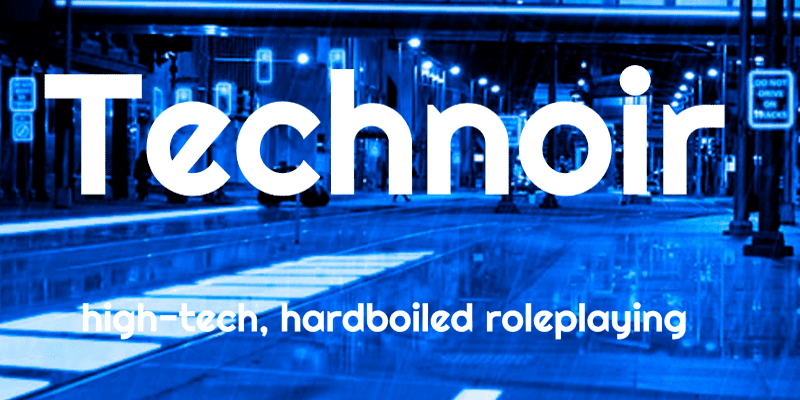 One of the best tabletop games I have ever played is Technoir, by Jeremy Keller. Technoir is a small tabletop RPG released back in 2011-2012 (Kickstarter and actual release, respectively) centered around games of, surprises, the tech noir genre. What exactly is the genre of tech noir? It’s a combination of science fiction and film noir. The most classic example is Bladerunner, but other examples include 12 Monkeys, Brazil, The City of Lost Children, and Dark City. The term was actually coined by James Cameron, who used it as the name of a nightclub in The Terminator. Is Terminator a tech noir film? You definitely see some of it in the first one, for sure. Anyway, it’s sometimes conflated with cyberpunk, though it’s not quite the same thing.

The entirety of Technoir’s rules and settings fits in a compact 207 pages, in a printed book half the size of a 5th Edition Dungeons and Dragons core rulebook. Not only does all of the setting and style information fit on a single page, it’s broken down to three separate single-paragraph topics. The book lays out the flavor and carries it through with examples in the various other sections. Part of the reason for the sparsity is the game wants the core mechanic of story creation to be incredibly wide open. This puts the spotlight on one of the best campaign and adventure creation tools I have ever seen: the transmission.

The transmission emphasizes upfront GM time investment in exchange for flexibility and modularity. It hinges entirely on the idea of players needing to connect the dots and engage in order to shake things loose, in true noir fashion. The transmission allows for low preparation for actual game running, and adds an element of surprise for the GM, as elements of the story are completely randomized or driven through in-play events. Now, as the GM, you did all of the creation work at the start of the game, so you likely have ideas about all of the individual component parts, but the way they are combined yields some combinations that likely did not spring to mind, even after a few brainstorming sessions.

As I continue discussing the transmission, I will be including examples from a transmission I created for the city of Hiyal, a city in the AD&D 2nd Edition Al-Qadim campaign setting. For those of you unfamiliar with the setting, it’s a sand-and-sorcery campaign setting with heavy influence from One Thousand and One Nights, Sinbad the Sailor, and many others. It’s an awful lot of adventuring fun, if you’ve never checked it out. For the traditionalists out there, forgive me. I’m not running a strict conversion, and much of it expands upon the original content.

In the simplest terms, a transmission is a framework for adventure. A transmission begins with an evocative name for the mega-city or area where the adventures will occur. These names should communicate as much as possible, as simply as possible. For example, the three transmissions included with the rulebook are Los Angeles Sprawl, Hong Kong Sling, and Kilimanjaro Ring. The additional free transmission on the website is the Twin Cities Metroplex. Coupled with the name are three categories, fleshed out with about a paragraph each: technology, environment, and society. The goal is to spell out what makes the location unique in each of those elements. For example, in the technology section for the Los Angeles Sprawl, it focuses on the entertainment industry, while the Hong Kong Sling discusses shipping and the “sling”, which launches cargo into orbit. Kilimanjaro discusses the “beanstalk”, the Earth-to-Orbit elevator that caused the growth of the city. In all cases, this is covered in only a few sentences, communicating theme rather than specifics. These categories are mutable, based on whatever you are attempting to convey. A fantasy setting might need a magic section rather than technology. On the other hand, it could also remain a technology section if you are running a magitech game, or a steampunk game with magic. You get the idea.

Besides this overview, you also have a master chart consisting of six categories, with six entries in each category. The categories are connections, events, factions, locations, objects, and threats. Out of these, you create an additional chart for each connection with two columns: connected and unconnected. You populate this chart with a connection, event, faction, location, object, and threat in each column. You can either create these with specific intent, or you can roll a 1d6 for each category to generate them. 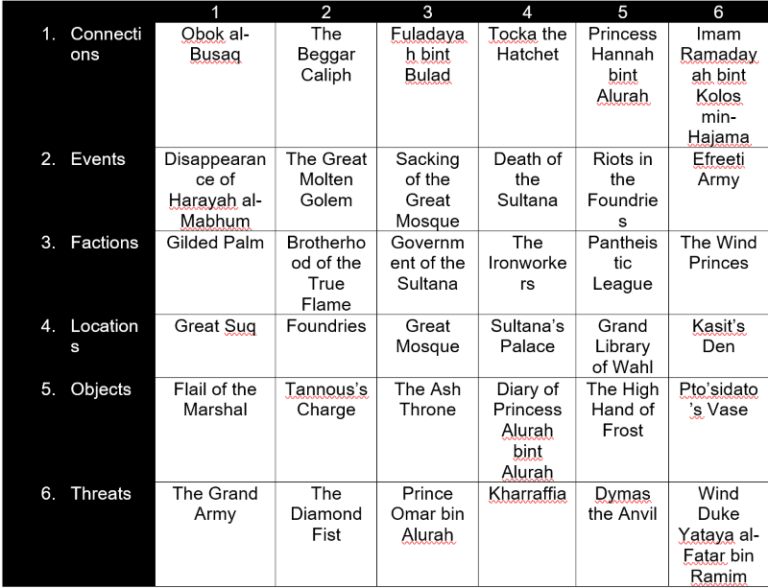 Next, create a single sentence description for every entry on the chart, broken into sections. For example, a modern event might be The Policeman’s Ball, or The Tournament of the Crown in a fantasy setting. The descriptions don’t have to be anything crazy. Something like “The yearly gala celebrating law enforcement thrown by the city’s elected officials” for The Policeman’s Ball, or “A jousting and melee-combat competition thrown by the king” for The Tournament of the Crown would suffice. Do this for events, factions, locations, objects, and threats.

Threats require a little additional work, as NPCs are generated during the creation of the transmission. This usually includes stat blocks for specific named NPCs, as well as generic stat blocks for things like henchmen or minions. This might be a bit overwhelming, but it’s a good way to go about things if you haven’t tried it. It ends up being around 15-20 stat blocks. It’s meaningful work, but not overboard. I’m a strong believer in upfront work when it comes to tabletop games, and having fully fleshed out threats is pretty cool. Even if you feel the need to supplement it later, you’ll find out a lot about the threats you are presenting in the creation process. Having the work done also allows clear communication of any NPC themes that emerge during the threat creation, as well. I am sure this is old hat for many people, but it’s worth considering if you have not done so.

Having a big list of fleshed-out story points is cool, but it’s nothing different from myriad available random-generation tables. Luckily, it’s not just a pile of raw data. Besides the transmission itself, you’ll need some medium to start a connection map. In Roll20, I just have another tab with the map. In meat space, I’d use a big sheet of paper or draw with a tablet. To kick things off, look at the chart and roll a d6 for a category, and a second d6 to select an item from the category. Do this three times and put them in a rough triangle on the paper. I generally reroll if they are the same category, though that’s not required. Once you have your three items, connect them and label their relationship to each other. This forms the basis of the initial story.

In Technoir, you have to leverage the contacts listed in the transmission as part of the character creation process. Contacts can only be used twice prior to the start of the game. The first time a contact is hit up, you place their name on the connection map without connections to anything else. The next time they are leveraged, you connect them to an existing node on the map. You could definitely do this if you were beginning a campaign by linking the connections to the character creation process, such as assigning skills that the connections could have taught, equipment they could provide, classes they can train, and so on. You don’t need to, thankfully, as transmissions are meant to be used even with existing characters. These are resources the PCs can go to for favors, goods, or information during the course of play, so you simply need to establish this possibility and introduce the characters in some matter. In the current game I am running, I did this through different ports and various sailors as the players traveled to the city from their central location, which is a collaboratively built city.

One of the twists to Technoir is that a contact can always be called upon for information or assistance, but this doesn’t mean they aren’t antagonists or won’t misdirect if the situation calls for it. Not knowing who to trust is a big part of the noir world, as is the idea of strange bedfellows. You can alter this to fit with whatever you are running, but I would recommend keeping the concept of contacts ready to lend assistance when pressed. It puts ownership in the hands of the players. 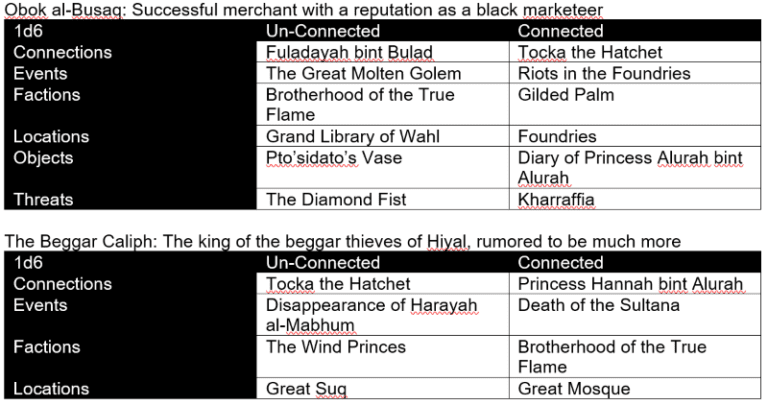 After you have around ten to fifteen nodes connected, you should have a fairly good idea of the story that has emerged from all of your previously unconnected prep work. A good idea is to consider creating a new transmission when you have utilized over half of your existing nodes. All you would do to link them together is start adding in parts of the new transmission as connections to the old one. An existing connection is linked to a connection in the new city, or is considering relocating to the new area, or so on. Again, this is probably old hat for experienced GMs, but it fosters continuity in a campaign setting, and also helps the world feel alive.

One of the coolest things about transmissions is their reusability. No matter what group you end up running them for, the likelihood that they shake out the same way twice is incredibly slim. It’s probably a smaller subset of people who run the same content for multiple people, but it’s a great way to open that a possibility without relying on a published module that people might have played before. Interestingly, it also allows you the possibility to create content without spoiling it for yourself. The NPC stats could be spoilers, but you could always leave those out if you were intending it to let others run it, or just offer one or two as suggestions.

If you haven’t thought about using something like this in your games, give it a shot. It’s a completely different way to approach content and setting creation. It doesn’t take a lot of time to create a transmission, even if you go into detail on the NPCs and items for the object creation. What’s more, you’ll flex your creative muscles in new ways, if you are used to a more traditional system of story creation. It can be a lot of fun to have some surprises in store for you as a GM, all the while retaining surprises for the players. It’s a Win-Win.

Interview from the Shed – Adventures from ...