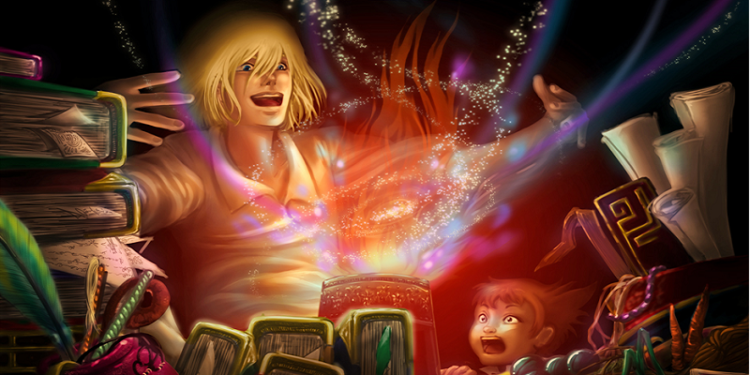 I had another article planned for today, but part of it isn’t ready for the light of day so it sits another week. Instead, we return to the ancient pastime of misreading printed materials and creating something ludicrous until our sense return to us and make us feel quite foolish. This week, one suggestion comes from @maycontaingeeks on Twitter – which is cool because it means someone is reading what I write. The other two are just from me. These come courtesy of having some recent eye issues, including a lot of blurry vision. Today in Misread Magic #2, we’ll cover arcane gait, bear, and feather flail.

@maycontaingeeks tagged me in a tweet initially sent by @geekonradio who shared the following blurb, “Like misunderstood song lyrics, last D&D session one player misunderstood the spell “Arcane Gate” for “Arcane Gait” aka “Arcane Swagger.” Now, that’s a player who speaks my language. That language is apparently tomfoolery, but still. When I think “arcane gait,” I think magical sauntering and sashaying. It’s an “all eyes on me” situation.

Arcane Gait
2nd-level transmutation
Casting Time: 1 action
Range: Self
Components: V, S, M (a piece of leather and quartz dust)
Duration: Instantaneous
You surround yourself glittering dust, allowing you to dazzle and glide around your opponents. Your speed doubles and opportunity attacks against you are made with disadvantage until the end of your turn.

Creatures within 5’ of you when you cast the spell and when you end your turn, and creatures that make opportunity attacks against you during your turn, must succeed on a Wisdom saving throw or become charmed until the end of your next turn. While charmed, these creatures are incapacitated and have a speed of 0.

Notes: You have expeditious retreat as a 1st-level spell, and haste and hypnotic pattern as 3rd-level spells. This seems like a solid 2nd-level spell to me with these spells in mind. It provides some movement and some control, but nothing in the way of utility of haste and hypnotic pattern. The duration is a big component of the decision, too. If this was a persistent effect from either the movement or the control, it might be too much. The only weird part is the buff and control lasting different durations, but I don’t think it’s a huge deal. Plenty of spells do something now, and another thing for a duration.

While fear itself is certainly something for people to be frightened of, other people are scared of bears. That’s a fine fear, and I totally get it. Bears are terrifying killing machines. Bears can smell fear, and they might be on the way right now to kill you if you are frightened of them. What’s even more terrifying than a bear lurking around every corner? A bear being launched at your goddamn face, that’s what. If I see a bear hurtling at me, I’m donezo. My opponent wins. I’m gonna peace out so hard I’ll instantly be transported to an ashram. Anyway, here’s a terrifying spell for just that purpose.

When you cast this spell, you hurl a spectral bear at your target, causing creatures in a 5’-wide, 100-foot long line to succeed on a Wisdom saving throw or suffer 6d8 psychic damage and become frightened until the end of your next turn, suffering half as much damage and not becoming frightened if they succeed.

At Higher Levels. When you cast this spell using a spell slot of 5th level or higher, the damage increases by1d8 for every slot levels above 4th.

Notes: A ghost bear would scare the shit out of me. On a practical level, it’s similar to lightning bolt in terms of damage, but scales slightly worse in exchange for a limited frightened effect. I don’t think this is particularly game-breaking, but it’s fun visual spell, that’s for certain.

I’m a big fan of both flails and turning things that seemingly aren’t weapons into traditional weapons. Feather flail is a spell that does exactly that. It allows you to take a feather and turn it into a literal wrecking ball on a chain. While it might not exactly save you in the same way feather fall does, it does make you figuratively 100% more likely to be painted on the side of a van or be found as a tattoo.

You bring a whole new meaning to the phrase “like the touch of a feather.” You transmute a simple feather into a two-handed silver flail. As an action, you may make a sweeping attack with the flail. Creatures in a 10’-cone must succeed on a Strength saving throw or suffer 2d8 bludgeoning damage and be knocked prone. A creature that succeeds on the saving throw suffers half-damage and is not knocked prone.

This weapon remains for 1 minute, or if you are no longer holding the weapon.

At Higher Levels. When you cast this spell using a spell slot o f 3rd level or higher, the damage (both portions) increases by1d8 for every two slot levels above the 2nd.

Notes: This is to create a fun weapon that encourages the caster to take some melee risks and mix it up. It also gives them a spell that sticks around and lets them use it as their action without relying on concentration. The benchmarks for this spell are moonbeam and spiritual weapon. Moonbeam gives you some sweet area of effect damage as an action, but doesn’t offer anything in the way of control. The damage is higher and the area is bigger, as well. Spiritual weapon gives the caster something to do with a bonus action, and gives consistent damage over the course of a fight. It’s not as much damage as this spell, but neither is it a spell that requires you to get into melee range.

The last thing I want to point out here is the single target damage with the spell is higher than the area of effect damage, but lacks the safety net and multi-target nature of the area portion. I think it’s a fun spell that would be great for the right type of caster.

As always, I’m taking suggestions as to what I should do next. Left to my own devices, I think I want to try something healing or environmental in nature. Maybe I will do something with necromancy. Lots of good puns there, no bones about it. Let me know what you want to see!

Using Art in your Games, P3