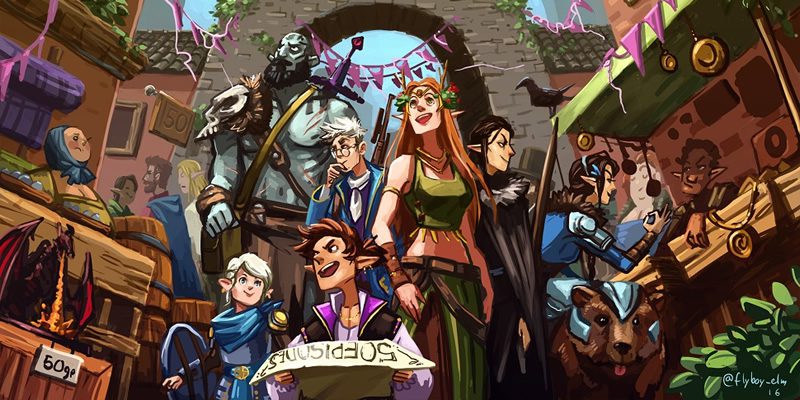 Fans of the weekly live action tabletop RPG series on Twitch/Web Critical Role can rejoice. Chris Pramas of Green Ronin Publishing (Titansgrave, Dragon Age RPG, Out of the Abyss) and Geek & Sundry were at the Critical Role live show at Gen Con on the weekend. They revealed that a Critical Role Campaign Setting Book would be coming out in the Spring of 2017 to the crowd who “went bonkers”.

Here is a quick summary of what we have been told.

Critical Role has excited many new fans about the world of Dungeons & Dragons. Each week, the show attracts hundreds of thousands of viewers, who watch it both live and recorded. Overall, Critical Role has garnered over 50 million views since its launch in March 2015. The cast includes Mercer, Travis Willingham, Marisha Ray, Taliesin Jaffe, Ashley Johnson (Blindspot), Sam Riegel, Liam O’Brien, and Laura Bailey. Additionally, the show has attracted quite a few celebrities who have joined the cast as special guests including Chris Hardwick, Felicia Day, Wil Wheaton, and Phil Lamarr, to name a few.

Green Ronin Publishing is a Seattle based company dedicated to the art of great games. Since the year 2000 Green Ronin has established a reputation for quality and innovation that is second to none, publishing such roleplaying game hits as Dragon Age, A Song of Ice and Fire Roleplaying, and Mutants & Masterminds, and winning over 40 awards for excellence. For an unprecedented three years running Green Ronin won the prestigious GenCon & EnWorld Award for Best Publisher.

Geek & Sundry is a digital entertainment company recognized for providing the best in award-winning Internet television content featuring leading voices in geek culture and lifestyle. Founded in 2012 by Felicia Day, the company offers a diverse content lineup of video games and tabletop gaming, such as Wil Wheaton’s TableTop, and explores the verticals of comics, music, literature, comedy and beyond. The network has also recently launched GnSLive on Twitch that provides of 30 hours of live content every week. Geek & Sundry is owned by Legendary Entertainment and is part of the Legendary Digital Networks which also includes Nerdist and Amy Poehler’s Smart Girls.