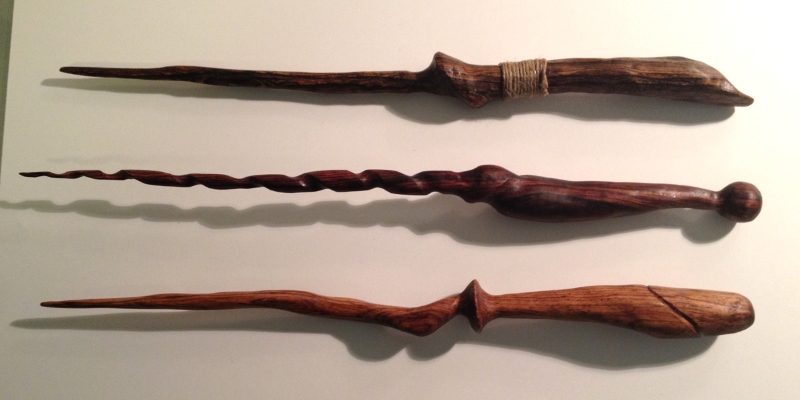 We are approaching the eve of another expansion for a popular fantasy video game. This time around, classes get an artifact weapon to level up and empower in different ways. Each specialization gets a different weapon to call their own. One thing about this made me incredibly sad: there are no more wands. Staves, daggers, scepters, and even swords (Thanks, Obama Gandalf), but no wands. Most people seemed to be fine with this, many even expressing joy they no longer had to use wands, using a variety of expected insults about the preferences and personality of people who like wands. I digress.

This wasn’t even the first time I have heard people mock wands. I help my esteemed colleague Brandes Stoddard run a LARP in the Atlanta area, and one of the things we did was design a wand system for ritualists, a type of traditional wizard. Here, ritualists prepare a spell based on a certain type of wand (10 different materials, each with 3 different crafting expressions), which serves as a focus (storage) for their spells. The wand then allows the wizard to change or enhance their current spells, but only a narrow band of those spells. Unlike other foci, the ritualist can only cast spells from this particular focus. In other words, it let the wizard become a specialist, at the cost of utility. While the people using the system seem to like it, I heard more than one person making continual Harry Potter jokes. First, the wand system in Harry Potter is actually super interesting and I will talk about it below. Second, sorry guys and gals, history wants to have a talk with you. It’s time for some wand knowledge. 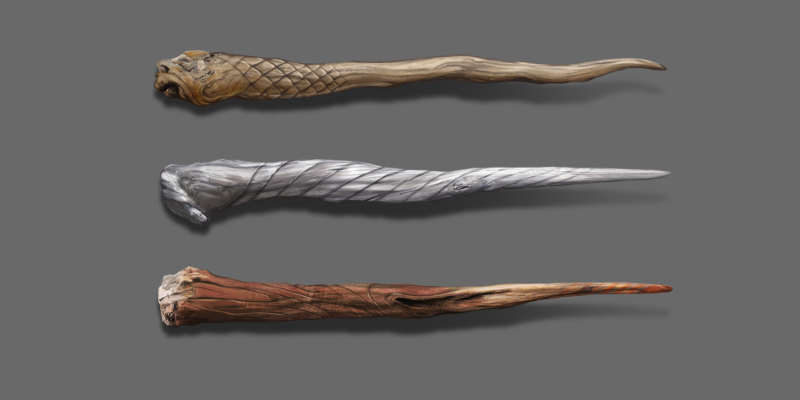 The history of the wand dates back to the Stone Age. There have been paintings discovered depicting figures of power holding sticks. Sticks were some of the earliest tools of mankind. They allowed the removed interaction and manipulation of the world. Conceptually, the wand hasn’t really changed. One of the definitions of magic is “the Science and Art of causing change in conformity with Will.” The wand was seen as the object that Will manipulated to cause the conforming change. In short, poking a dead animal and poking the cosmos are similar.

From a magical implement perspective, the wand featured prominently in ancient Egypt. Magic was mostly the purview of the lector priests. The priests used curved ivory or metal wands as a prominent implement in their magic. These wands were crafted to resemble ribs, and were covered in imagery appropriate to the magician. They used wands in conjunction with magic spells, typically written down in large tomes or on papyrus scrolls. The function of the wand was to direct the magic, and the beings behind the magic, to behave in a specified way. They were believed to allow the summoning of specific deities to fight evil forces, like snakes and foreigners, on your behalf. The wand was also used as a device of delineation. The wand could make circles, lines, or draw symbols that designated where a spell was directed. There was a lot more that went into this ritualistic magic, but the wand was a key part of it. Without the wand, the magic wouldn’t function.

Shifting from Egypt to Iran, we find the wand to be a crucial feature of Zoroastrianism. Here, the wand is known as a barsom. A barsom is not a single object, but rather a collection of extremely specific wooden branches grouped together in differing number, depending on the ritual in question. Each branch must be a specific height and thickness, grouped together in lots of anywhere from three to thirty-five. These sticks were usually not tied, though some rituals required their binding with further specified methods. The barsom was then displayed during rituals on a crescent-shaped holder, and created a link between the physical and spiritual worlds. Holy or sacred energy enters into the barsom, to be channeled outwards. 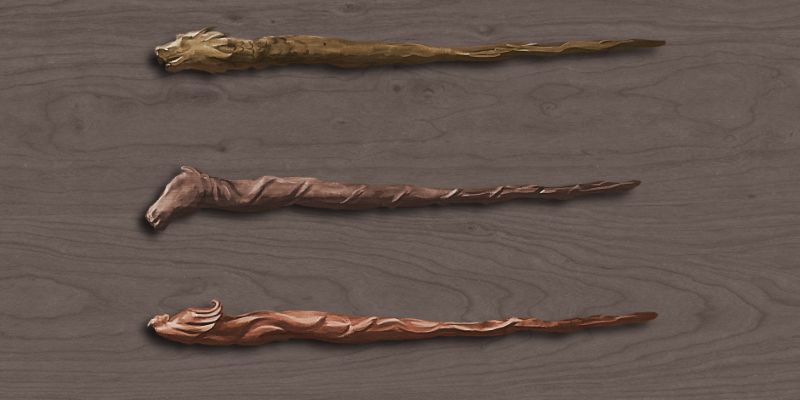 Moving over to Greece, it’s no surprise to see the wand appear in a number of different ways. One of the most prominent is the caduceus, the winged wand wrapped in twin serpents, carried by Hermes Trismegistus. While this is often thought to be a staff, most classical depictions show the caduceus to be much smaller, more in line with a wand, scepter, or rod. The caduceus possessed the power to send the waking to sleep, wake the sleeping, ease the pain of the dying, and restore the dead to life. The caduceus is often mistakenly used as a symbol of medicine, as it is confused with the rod of Asclepius, the Greek god of healing and medicine. Circe wields a wand in the Odyssey, too. In her hands, the wand is used to transform Odysseus’s men into beasts.

Beyond the caduceus, the thyrsus also played a prominent role in Greek mythology. The thyrsus was a wand covered in ivy, tied with a ribbon, and topped with a pine cone. The thyrus was used by Dionysus and his followers, primarily satyrs. It was also believed that thyrsus could double as a powerful weapon, should the thyrsus be wielded by Dionysus or his holy followers. In that case, a single touch from the head of the thyrsus was enough to incite lasting madness.

The wand also plays an extremely important role in Norse mythology. The völvur were female shamans and seers whose name translates into “wand carrier.” Völvur practiced shamanism, sorcery, and prophecy in equal measure. They were so skilled that even the gods came to them for prophecies and aid against the future. Freyja was the most magical of the Norse goddesses, and while she was a goddess of love, she was also a deity of anguish, blood, and death. Whatever Freyja could do, the völvur tried to replicate. One of the ways the völvur did this was with the wand. The wand was a way to manipulate the threads of fate, to tighten or loosen fetters or bonds, and control the fates of individuals.

If you expand the role of the wand to considering wand-as-distaff, then you are inundated with tales of magical and mystical weaving. As many depictions of wands do this very thing, and there is a certain approach to magic in general that has roots in weaving and textiles, it’s not really far afield to consider it. From here, you’re looking at prominence in Egypt, Greece, Germany, Ireland, France, Finland, Japan, and so on. Many, many cultures have folklore surrounding textiles. It’s hardly surprising. Textiles play a crucial role in cultural and national development. 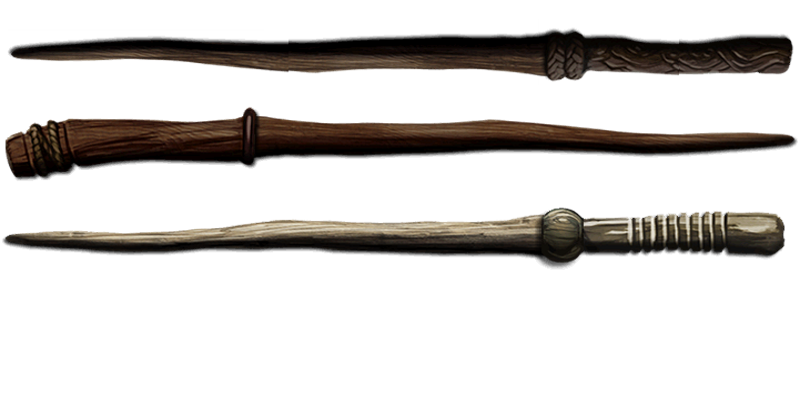 Even discounting all of the above, people poke fun at wands because of Harry Potter. They wave around sticks, say some vaguely Latin-sounding words related to what they are doing, and smirk. This is a little unfair, as wands in the Wizarding World are pretty neat. To start, wands are all unique. They are crafted out of a variety of woods, in different shapes and sizes, and each contains a “magical core”, such as a unicorn hair, phoenix feather, or dragon heartstring. These wands are created for certain types of spells; some are better for charm work, while others excel at transmutation. On top of this is the idea that the wand resonates with specific wizards. Also, a wizard can win the allegiance of a wand by defeating the previous owner in battle, and it would then function for the victorious wizard just as well as her own personal wand. Thus a wizard might have choices for spellwork, provided they went out fighting for them.

Of course, there is nothing preventing wizards from buying a new wand, or having multiple wands, one would think. Instead, the wizard just grows comfortable using a certain wand, and wants to keep working with it, forming a special bond. However, certain wands might just be all-around better than another wand. This concept is broached prior to the introduction of the Deathly Hallows, as an aside. To cap it all, the wand is how humans interact with magic, filling the traditional historical role as directed implement. In short, there is some pretty cool stuff here if you are looking for it, and even if you don’t, it’s pretty historically on-point.

The wand has a very prominent role in the history of magic in the real world, so I love seeing it supported in fantasy and games. Dungeons & Dragons does this, and to a great degree. Heck, in 4e they played around with the wand-as-conductor-baton for a version of the Bard. Even if you don’t care for the edition, you have to respect a lot of the risks they took. In 5e, they are magic items and implements, with plenty of variety. When you are thinking about the next cool item to hang a story on, consider a wand. There are plenty of great real world legends and history to draw from, and it’s something not many players spend much time considering. Give some love to the wand. Wands are awesome. Also, sometimes wands symbolize the penis, which is funny, because penises are funny.

The Schemes of the Archfey