Get to Know the Erinyes 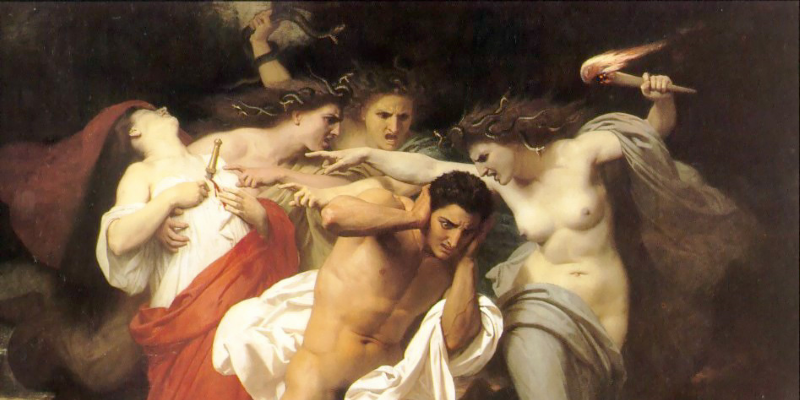 We’re official into October. For many people I know, October means one thing: Halloween. While I am certainly not opposed to a fancy dress party, not to be confused with the Fancy Dress Party, I’m not exactly someone who goes crazy for the holiday. I like making stuff, but going to a party means I have to socially interact with people, all of whom might realize at any moment that I am the worst. Rather than have it be proven, I prefer to stay at home to cultivate my mystique. I might have veered from the point. Regardless, this time of year sees a whole host of devil and fallen angel costumes, of the classical, re-imagined, scary, or sexy variety. A kind reader (you can tweet to @tribality or @standsinthefire if you want me to cover something, or just complain about/to me) asked if I would cover demons or devils in the new future, and this time of year is perfect for it. Without further ado, let’s talk about one of my favorite devils: the erinyes.

The erinyes (erinys is the singular) join the giants as creatures that have been in it since the very beginning. This surprised me when I was digging into them a few months ago, mainly because I never see them used in games, nor discussed on a larger scale by DMs or players. However, before we jump into their D&D history, we have to first take a look at their mythological origins. Even if the name ‘erinyes’ isn’t familiar to you, I would wager you already know about this creature. You just probably know them by their other name: the Furies. 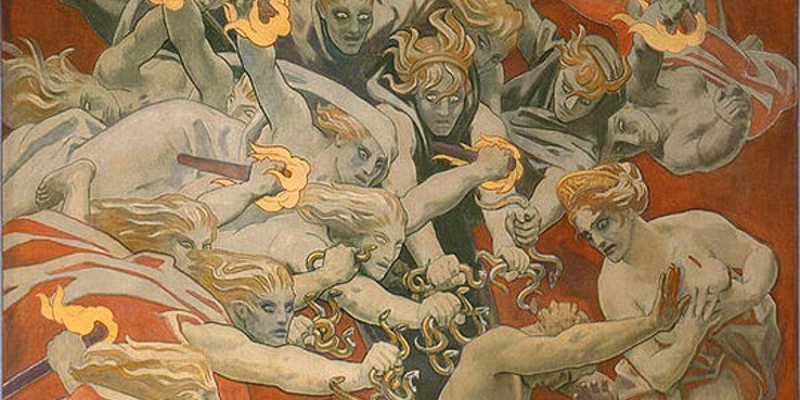 According to most tales, the Furies were formed in one of two ways. They were either formed from the blood of Uranus falling and impacting Gaia (the earth) when the titan Cronus cut off Uranus’s genitals and threw them into the sea, or they arose from a union between Nyx and Gaia. Contrary to a lot of contemporary interpretations, there weren’t just three Furies to start out, but an undisclosed number. It wasn’t until the writings of Virgil (well, probably from Alexandran stuff, but we can let that slide since there’s no attribution) that the number gets pegged at three. From that point forward, we are left with Alecto (“endless”), Megaera (“jealous rage”), and Tisiphone (“vengeful destruction”). It’s a strong likelihood that Tisiphone was actually just Demeter under another name, as she was worshipped as Erinys in Thelphousa (another name for Tisiphone is Tilphousia).

The Furies were maiden goddesses, like Artemis and Athena, and were considered the chthonic deities of vengeance, or sometimes just called the Infernal Goddesses. Chthonic is a great way to describe them, as they resided in the Underworld. The Iliad further codifies them as “those who beneath the earth punish whosoever has sworn a false oath.” From a 5e perspective, that would make erinyes the goddesses of Oathbreaker paladins, which is a pretty neat idea, if you want to lift it for whatever reason. Erinyes were said to be older than most of the gods, and reside within Erebus (which we might as well call the Outer Dark, and is both a god and a place) when not manifesting in the world. There is also an interesting twist the Romans gave the Erinyes that has them exhibiting three different aspects depending on where they are: the Eumenides (“kindly ones”) in Hell, the Furiae on Earth, and the Dirae in Heaven. The name Eumenides is actually attributed to Euripides, who used it in Orestes as a name to call them, since you should not speak their name.

All things considered, the Erinyes had a pretty shitty job. Their job was to hear all of the complaints that mortals made against other mortals. They judged the gravity of the complaints, and then punish those crimes accordingly by relentlessly pursuing those they had judged. Nor were they goddesses of beauty. Unlike D&D, who uses them as a devil stand-in for succubus, the Greek Erinyes were horrific to look upon. They were considered crones and hags with monstrous features such as snakes for hair, pitch black skin, animal faces, animal wings, and other terrifying things. They also carried brass-studded scourges as their weapons of choice. Boy, they sure loved their torture! 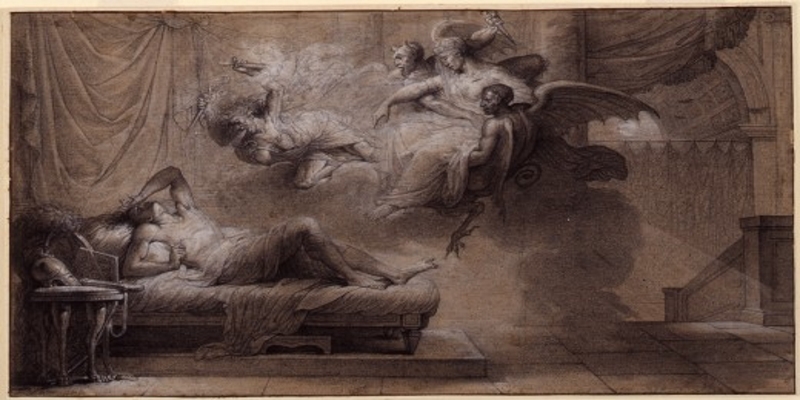 This is all a far cry from how they are used in Dungeons & Dragons. The erinyes (here used as both singular and plural, as far as I can tell) appeared in the original 1977 Monster Manual. In second edition, they made an appearance in 1991’s Monstrous Compendium Volume One Planes Appendix (say that five times fast), and then again in 1994’s Planescape Monstrous Compendium Appendix. Here, they appear under the baatezu label. Good ol’ Baator. A devil by any other name is still lawful and evil. Of course, not all devils were baatezu, some were devil constructs and others just…weren’t? I dunno. I might look into it one day. You just didn’t want to say devil or demon in the days of 2nd edition. Thanks a lot, Tom Hanks. Third edition sees the restoration of demon and devil as names, and the erinyes is there in 2000’s Monster Manual and in 3.5’s Monster Manual released in 2003. In a really weird decision, the succubus appears as a devil in place of the erinyes in 4th edition’s first monster manual, and it isn’t until Monster Manual 2 in 2009 that we see the erinyes again. Luckily, 5th edition knows what’s up and the erinyes is featured in the Monster Manual.

Originally considered a lesser devil, 5th edition sets them at Challenge 12, giving them truesight and telepathy; some carry a rope of entanglement. I’d be willing to argue that they are not lesser devils, but are firmly in the greater devil category. There is only a smattering of lore provided about the erinyes in 5th, but it’s pretty neat. They are considered the most beautiful of all the devils, appearing as male or female, but always gorgeous and perfect. They are tremendous warriors, and punish those who have wronged their masters or defied the laws of Asmodeus. They all have feathery wings, and wear beautiful armor and weaponry. They also all carry bows. This is a pretty good callback to earlier editions of the erinyes, which were fallen angels that shot people with a fiery bow. These erinyes don’t have that much to do with fire, opting to be poisonous instead. I assume this is striving for some sort of deadly beauty theme. That’s what comes to mind thematically, anyway.

To really understand my love of erinyes, you have to learn about Glasya. While the name is almost certainly taken from Glasya-Labolas (sometimes known as Caarcrinolaas – President of Hell), the similarities end there. Glasya isn’t a nightmare-inducing dog-griffon monster. Instead, she is the daughter of Asmodeus and a princess of Hell. Glasya’s symbol is the copper scourge, a definite nod to the scourges carried by the Furies. She first appeared in Dragon #75, but that was a preview of the Monster Manual II, released in 1983. She was first written to be the consort of Mammon, but that was cast aside, and she became the leader of the erinyes when Guide to Hell was published. She appears in 2002’s Book of Vile Darkness, and is introduced as the new ruler of Malbolge in Fiendish Codex II: Tyrants of the Nine Hells, released in 2006. 4th edition gave her a lot of love, where she is still ruler of Malbolge, mentioned in the Monster Manual, featured in Dragon, The Plane Above: Secrets of the Astral Sea, and Demonomicon. She also differs in appearance from the other erinyes, but is very similar. She is, of course, beautiful, has coppery skin, dark red or black hair, has bat wings, horns, and a forked tail. Remember when I was talking about sexy devils before? Yeah. Still, she’s so rad I will overlook it. 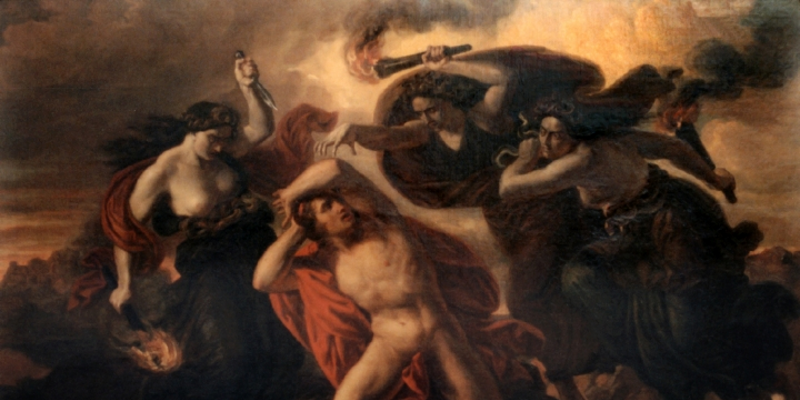 One of the coolest things about her is that her story doesn’t revolve around whose consort she is and what their dysfunctional relationship is like. It was like that with Mammon at one point, but it’s not any longer. Now, her story has her forming a fast friendship with Fierna, daughter of Belial, teaching her to escape the shadow of her father and become independent, with her own goals and plans. She also doesn’t surround herself with the typical scheming court you might expect. She has the erinyes and paeliryons as servants, and only has Tartach, who left the court of Baalzebul due to policy disagreements, and Beleth, Prince of the Imps, as big-name followers. It’s such a refreshing change of pace, as a story of self-empowerment… even if she is evil.

The other super cool thing about her is that her lair is totally metal. Not actual metal, but you’d see it on the side of a van in the 80’s. Ossiea, her fortress, is created from the huge, grotesque bones of the Hag Countess who used to rule Malbolge. One finger has been hollowed out to make a Torture Tower, at the top of which is a nightmare that used to belong to the Hag Countess, but is now imprisoned because it tried to buck Glasya into a lake of acid. Psh, horses, amirite? The windpipe was turned into a subterranean passageway, and it still pulses and moves. A second finger is being hollowed for an unknown reason. I love story hooks like that. 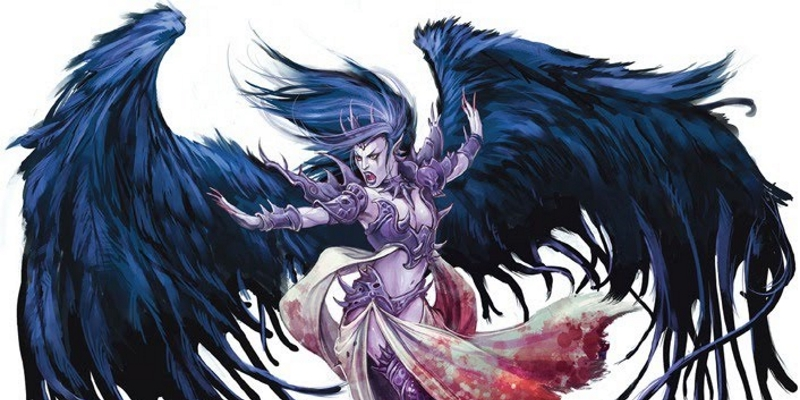 Glasya’s whole deal has become empowering women, again, even if she is evil. She prefers to meddle in realms with traditional gender roles, so she can teach the women how to secretly rule everything. The fronts for her temples are brothels and bordellos. In one story, she was worshipped by the wizard Talakara. In exchange for her loyalty, Glasya gave her a crown containing the soul of an ancient and powerful skeleton warrior by the name of Agrovale. With that extra might, she conquered the land of Pandar in Glasya’s name.

Finally, she has a feud going on with my other favorite devil, Levistus, either because Levistus murdered her mother, whom she dearly loved, or because he spurned her affections. I much prefer the first story. It’s not every day you get to tell a story about a devil loving a parent and seeking revenge for her mother’s death. That’s a player-centric motive that is easily identifiable. She’s trying to catch Levistus riding dirty, so she can get the go-ahead to wage a war against him from her father. It’s great story fodder, provided you want to use it.

I’m a huge fan of devils in D&D. I like telling stories where players can easily see the motives of the villains and how they ended up there. The players might not agree with the outcome, but getting them to understand how it makes a certain amount of sense is important. I don’t want my evil to kick puppies and eat babies. I want it to start off enforcing curfews, and then demanding inspections at entrance and egress points in the city, and then start a policy of profiling and immigration denial. That’s the stuff the players my players can identify with. Using the erinyes and Glasya to highlight the depths of pettiness and disdain contained within everyday people? That’s what I am talking about.