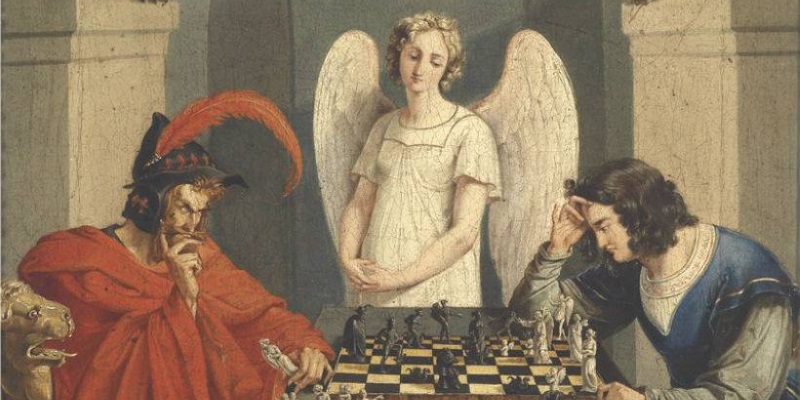 So, funny story, I was digging through boxes and boxes of books and Fantasy & Science Fiction magazines at my parents’ house the other day, when I found my old copy of Player’s Option: Spells & Magic. In case you’re not familiar with the Player’s Option series, they more or less constitute a 2.5 edition of D&D. I’ve mentioned Skills & Powers several times in the course of the History of the Classes. Spells & Magic picks apart the magic system and offers variant classes, spellcasting rules, and lots of new niche-use spells. Anyway, thumbing through this tome for the first time in… uh… sixteen or seventeen years, I was flabbergasted to discover that there are rules for warlocks here, as (somewhat) distinct from wizards. Since this clearly pre-dates Complete Arcane, which I foolishly labeled “Part One,” I’m obligated by the unholy power of numbers to label this article “Part Zero.” (God help me if I should learn of a 1e or OD&D warlock as a discrete class.)

The warlock is far from the only variant that shows up for the first time in this book. We also see artificers, geometers (sure, they had already been a kit earlier in 2e), alchemists, elemental mages, dimensional mages, force mages, shadow mages, alienists, and shamans. There are also classes that come from 1e, but seem to skip 2e, such as monks.

Quick preview of a future article: 2e Spells & Magic monks are really frickin’ weird. They’re built off of the cleric, but their spell list is… a really interesting set of choices.

A lot of the variants presented here, including warlocks, specifically require that you use the book’s spell point system. This is far from the last time D&D will try to adapt to a spell point system, and I daresay that the 5e rules are even pretty sane. I wish I could say the same for Spells & Magic. Look, it was the mid-90’s, everyone was experimenting with point-buy, radical customization, the whole deal. I mean, it was the decade of White Wolf, what did you expect? (The other reason you know it’s the 90s is that it gets spelled “magick” a whole lot.)

In this book, the rules run headfirst into my complexity limit and keep on going. Anyway, this isn’t mainly an article about the spell point system, but the short version is that it tracks a lot of data for fairly modest return in interesting gameplay. The point-cost tradeoff between prepared spells and spontaneous casting is probably the best thing going; optional restrictions to cut costs is probably the least compelling piece.

This warlock is built on the foundation of the wizard class, and is therefore an Intelligence-based caster. (Not that 2e has any concept of Charisma as a spellcasting stat.) One big warlock feature is that they don’t have to prepare a spell multiple times to cast it multiple times – much like in 5e, they can prepare once and cast repeatedly, though they are limited to no more than nine spells of any one level in a day. (This tells me that they’re possibly ill-suited to a post-20th-level game, but given the other rules here, that’s putting it mildly.)

The central feature of the warlock, however, is their corruption mechanic. On one hand, the flavor text says that warlocks learn spells from entities of extraplanar origin, and later calls them patrons. That’s entirely familiar from 3.5 and later. On the other hand, there’s a bit of wiggle room in these rules to have no patron until the first time you fail a corruption roll, as that is the point at which you “[attract] the attention of a chaotic or evil power.” That would be a kind of fascinating approach in D&D – and coincidentally it’s exactly how things work with Horrors in Earthdawn. I’m not saying Baker, et al., lifted this from Earthdawn – rather, I’m intrigued by the hacking potential. Anyway, their intent becomes clear enough later in the text.

Also, describing the patron as “chaotic or evil” makes me think of Jonathan Strange and Mr. Norrell’s man with the thistledown hair – chaotic, undesirable attention, but with morality that has nothing in common with mortal morality.

It’s explained out of order, but the most important thing about a warlock is that they have to perform dangerous negotiations with their patron to regain spell points. A mere eight-hour rest won’t do it – instead, you need eight hours per character level. A 20th level warlock can reset all of their spell points with a week of uninterrupted work, and still have eight hours left to catch some shut-eye. This reminds me of 5e’s rules for longer short and long rests, but… ouch.

A warlock starts with no corruption, even though their connection to their patron is the source of their spell knowledge. The rules call out the parallel between these corruption rules and the 2e Ravenloft Dark Powers checks. Thereafter:

Finally, you can choose to attempt a saving throw anytime you would gain corruption. It’s a saving throw versus breath weapons, with a penalty equal to your new corruption level. Yay, bizarre and arbitrary 2e saving throws! For no apparent reason, wizards start out the best at Breath Weapon saves, but eventually warriors pass them, and – exactly unlike 3.x and later – rogues are the worst at this.

Also, the text of the Breath Weapon save calls out that it is for when Dexterity is a critical factor in survival, which both makes no sense for spiritual corruption and makes no sense in context, because having a high Dex score doesn’t modify this saving throw in any way. Now the rules text for Dexterity calls out that the Defensive Adjustment for a high (15+) Dex score applies to “attacks that can be dodged – lightning bolts, boulders, etc.” Lightning bolt, of course, uses a save vs. spells, unless it’s actually a dragon’s breath weapon. Because lightning from a breath weapon works differently than lightning from a spell. At least wizards are consistently the best at avoiding lightning from a spell! (Boulders do not involve saving throws of any kind, as far as I know.) My point here is, I have never understood any of the appeal of 2e-and-earlier saving throws.

Below 5th level, you have a 35% chance to resist Stage 1 corruption, and things get somewhat better from there as long as you aren’t racking up penalties. Even more than other wizards, you need to get to 5th level as fast as possible. However, even attempting the saving throw – regardless of its outcome – knocks you out of the adventure for 1d3 days, as you lose all spellcasting ability and suffer a -3 penalty to your already-abysmal attack rolls. I’m sure that was super necessary!

This is a spellcasting system that manages to be more punitive than King Arthur Pendragon, and that’s saying something. At least in KAP, you don’t get taken out of the action for casting spells until the end of the adventure, at which point you’re out for months. I really wonder how many groups used these rules exactly as written, and how many used them with minor or extensive modification. If you fall into either of those categories, please tell me about it in the comments!

Taken together and ignoring its most aggravating elements, this warlock is a fascinating first step in the development of the class. Considering how much of 2e played it safe to dodge the Satanic Panic of the 80s and 90s, it’s impressive that this even saw print! There are clear connecting threads between these rules and the 3.5 warlock (and the 3.0 Acolyte of the Skin prestige class before it), as well as the tiefling of 2e Planescape – fiendish power granting fiendish features or random fiendish mutations. Later iterations of the warlock specifically reverse this one’s approach to power – instead of making power slow and difficult to regain, requiring one or more weeks between adventures, they are faster-paced than wizards, with a heavy focus on at-will potency. (Ignoring 4e for the moment, because it is so different.)

But seriously, if you know of an OD&D or 1e warlock, perhaps hidden away in an early issue of Dragon Magazine, you’d tell me, right?