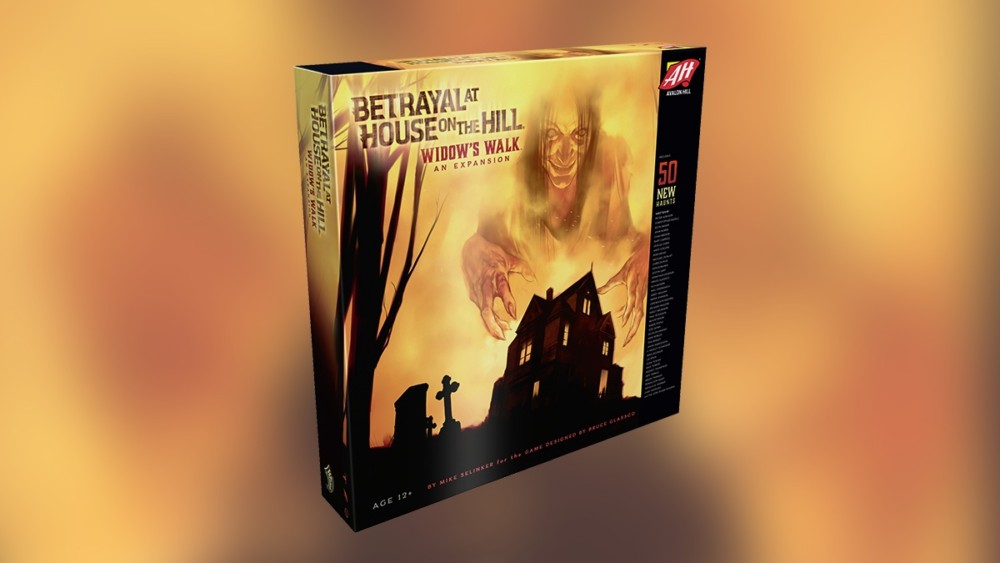 Avalon Hill recently released Widow’s Walk Expansion for the popular board game Betrayal at House on the Hill. The main game has a lot of replay with the numerous haunts and game board changes each time you play. We have had the original game for a while, and now with the expansion, we are excited to add 50 more haunts, room tiles to the game, additional cards, and another floor to explore in the house. Widow’s Walk released October 14th, and I would recommend that if you don’t have House on he Hill then you pick it up, and the expansion.  You will need the base game in order to play with the expansion. 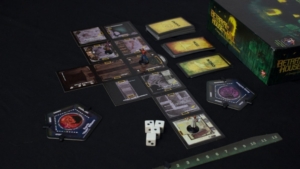 If you have never played Betrayal at House on the Hill, it is not a complicated game, and I think the rules are easy to understand. It is a perfect cooperative game to play during your game night for 3 to 6 people, and when we play a game usually lasts about an hour. After playing the expansion for a few sessions, I have to say that the new expansion haunts are incredible. They blend well with the previous haunts from the original game. They’ve added a dumbwaiter to some rooms; so players can travel between floors more easily, as well as additional tokens that can help with room ability tracking and new monsters.  We have only played through a fraction of the haunts so far, but it is nice to now have 100 haunt scenarios and just make this great game better!

There is also a special bonus “mega haunt” that is triggered when all of the explorers have completed specific haunts.

You can pick up the game on Amazon here:

The house on the hill has a wicked reputation. Those who dare to darken its door often leave steeped in madness and despair—if they leave at all. 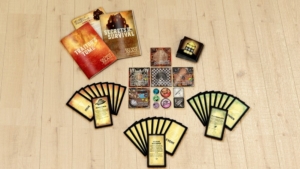 eaches new heights with Widow’s Walk—the first-ever expansion for the critically acclaimed board game Betrayal at House on the Hill. The house is expanded with the addition of 20 new rooms, including the roof, a previously unexplored floor. Also in its halls you will find new monsters, items, omens, events, and 50 brand-new haunts, penned by an all-star cast of contributors from the world of gaming and entertainment. In Widow’s Walk, terror and panic are taken to a whole new level.

Enter if you dare. Exit if you can.

You must have the Betrayal at House on the Hill board game to use this expansion.

Here is what you get in Widow’s Walk Expansion:

There are a few missing tokens in the box, and you can download the speed roll and ghost tokens here.

There were a lot of contributors for the expansion. A LOT! Don’t take my word for it, here they are:

Andy Collins works as a game designer & lead writer for Undead Labs, where he makes up stories about a world overrun by zombies. He was a designer on 4th Edition Dungeons & Dragons and Marvel Online.

Angela M. Webber is the singer, guitarist, and ukulelist in the nerd rock duo The Doubleclicks.

Anita Sarkeesian is the filmmaker and commentator behind Feminist Frequency. Her film series include Tropes vs. Women in Video Games and Ordinary Women: Daring to Defy History.

Bart Carroll is Digital Marketing Manager for Dungeons & Dragons. He can be found @bart_carroll. If he only had one spell slot left, he would memorize flight before invisibility. Despite many failed experiments to prove otherwise, unlike Luke Cage his skin is not impenetrable.

Ben Petrisor is a designer on Dungeons & Dragons and the co-designer of the board game Temple of Elemental Evil.

Brian Tinsman worked on the early version of Betrayal at House on the Hill as it transitioned from Hasbro to Wizards of the Coast, when it was one of hundreds of games he evaluated for possible publication. He also spent 10 years designing Magic: the Gathering cards and is the author of The Game Inventor’s Guidebook.

Bruce Glassco is an English teacher at a community college, who loves playing and designing games that tell stories. He is the original designer of Betrayal at House on the Hill.

Chad Brown is a veteran of computers, puzzles, games, events, and organized play from Boston, San Diego, and Seattle. As a game designer for Lone Shark Games, he is the lead developer of the Adventure Card Games for Pathfinder and Apocrypha.

Chris Dupuis is a designer on Dungeons & Dragons. He has developed games like Dungeon Command, Risk Legacy, Heroscape, and Lords of Waterdeep.

Christopher Badell is the co-founder of Greater Than games and the co-designer of the card game Sentinels of the Multiverse.

Don Eubanks works at Gearbox Software as a programmer on Borderlands and other epic videogames.

Eli Halpern is a co-creator of Cards Against Humanity.

Elisa Teague is a designer and art director at Lone Shark Games. She is the designer of the game Geek Out. She is the lead developer of this expansion for Betrayal at House on the Hill.

Gaby Weidling works at Lone Shark Games as a developer and is involved in game, puzzle, and event design projects. She’s been a designer on the Pathfinder Adventure Card Game, The Maze of Games, Epic Vs. Awesome, and the Gen Con Puzzle Hunt. Her formal title at Lone Shark is “puzzle ninja.”

By day, Gwendolyn Kestrel works in the realm of online marketing; by night, she’s an avid gamer. She was a haunt designer for the original Betrayal at House on the Hill and a designer and developer for Dungeons & Dragons.

Jeff Tidball is an award-winning game writer, designer, and producer, as well as the Chief Operating Officer at Atlas Games. His games include Pieces of Eight, Cthuhlu 500, and Cults Across America.

Jerry “Tycho” Holkins is one half of the duo that creates the Penny Arcade comic.

John Borba is an avid tabletop and video gamer, video editor, and host for IGN.

Jonathan Gilmour is the designer of the cooperative survival game Dead of Winter.

Justin Gary is the president of Stoneblade Entertainment and the co-designer of the card and mobile games Ascension: Chronicle of the Godslayer and SolForge.

Keith Richmond is a developer on the Pathfinder Adventure Card Game. His most notable previous work includes Epic Living Forgotten Realms adventures and projects for Wizards of the Coast.

A game designer on the Lone Shark Games team, Liz Spain works primarily on turning stories into card games like the Pathfinder Adventure Card Game and Apocrypha. She is the designer and publisher of the board game Incredible Expeditions.

Max Temkin is a co-creator of the games Cards Against Humanity, Slap .45, and Secret Hitler, and the publisher of the zine Maxistentialism.

Michael Dunlap is the senior manager of sales operations at Wizards of the Coast.

Mike Selinker is the president of the Seattle design studio Lone Shark Games. In addition to developing Betrayal at House on the Hill, Mike’s games include the Pathfinder Adventure Card Game, Unspeakable Words, Lords of Vegas, Risk Godstorm, and the Apocrypha Adventure Card Game.

Mikey Neumann is Gearbox Software’s chief creative champion and a writer on Borderlands.

Mons Johnson is a designer anddeveloper for Magic: The Gathering, as well as one of the original developers on Betrayal at House on the Hill.

Paul Peterson started his game design career in the card mines at Wizards of the Coast working on Magic: the Gathering, Pokemon, and his card game, Guillotine. Since then he moved between the worlds of electronic and tabletops games designing everything from a massively multiplayer roleplaying game to a virtual world for girls to a collectible poker chip game.

Pendleton Ward is the cartoonist who created the hit cartoons Adventure Time and Bravest Warriors.

Peter Adkison founded the companiesWizards of the Coast and Hidden City Games. He is the owner of Gen Con,LLC, and the filmmaker behind The Devil Walks in Salem.

Quelle Chris is a hip-hop artist and producer whose albums include Lullabies for the Broken Brain, Innocent Country, and Ghost at the Finish Line.

Rob Daviau is the creator of the Legacy game series including Risk Legacy, Pandemic Legacy, and SeaFall.

Tifa Robles works for Microsoft, and founded The Lady Planeswalker Society, a group that creates safe environments for learning Magic: The Gathering.

Will Hindmarch writes and designs games and fiction. In addition to co-founding Gameplaywright Press with Jeff Tidball, Will has designed or developed games like Storium, Odyssey: JourneyandChange, Always/Never/Now, and Project: Dark.

Zoë Quinn is an independent game developer, artist, and co-founder of Crash Override, an online abuse crisis center and advocacy organization. She has worked on critically acclaimed games including Depression Quest, Jazzpunk, and Framed, as well as multiple books like State of Play and Crash Override, and will soon be the subject of a major motion picture by Pascal Pictures.

The Lone Shark Interns—Thomas Ball, Javier Quintero, Aviva Schecterson, and Lucy Tibbits—had no idea what was waiting for them when they agreed to take this job.