Bloodborne: the Card Game – We Die, We Live, We Die Again 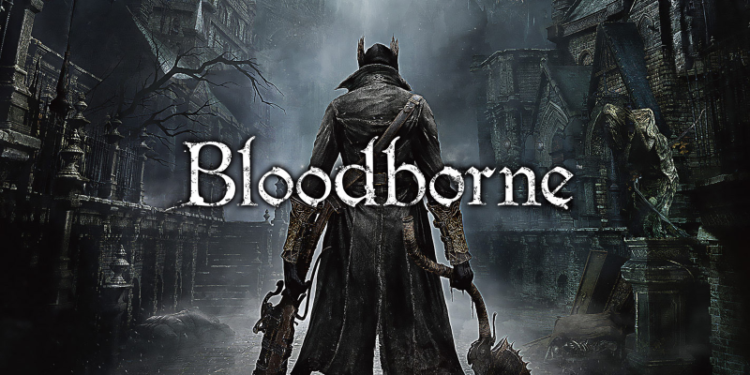 Welcome home, good hunter. What is it you desire? If you desire a card game that captures the feel of Bloodborne, rough edges and all, then I have good news for you. If you desire a card game that is truly cooperative and pits you against the forces of nightmare I have…well, not good news, but not exactly bad news. I bet most people didn’t even realize Bloodborne even HAD a card game. I certainly didn’t, until I was Christmas shopping and stumbled across it. As I am a lover of FromSoftware games, and boy did I play the shit out of Bloodborne, I had to pick this up.

I thought it was a weird, unlicensed game, as I hadn’t heard of it, but the Playstation logo was visible on the front of the box. The game is designed by Eric Lang, who is pretty well known, as far as board game designers go. I haven’t played most of this games, but Chaos in the Old World is one of my favorite games, so he gets a thumbs up just based on that. The Game of Thrones Card Game is also his, and is pretty good, as those things go. It’s no Game of Thrones Board Game, but you are less likely to lose friends over it, too. Anyway, it’s from a dude with some bona fides. If you have played Chaos in the Old World and Arkham Horror, you will quickly grasp what this game is doing. If not, you totally should. 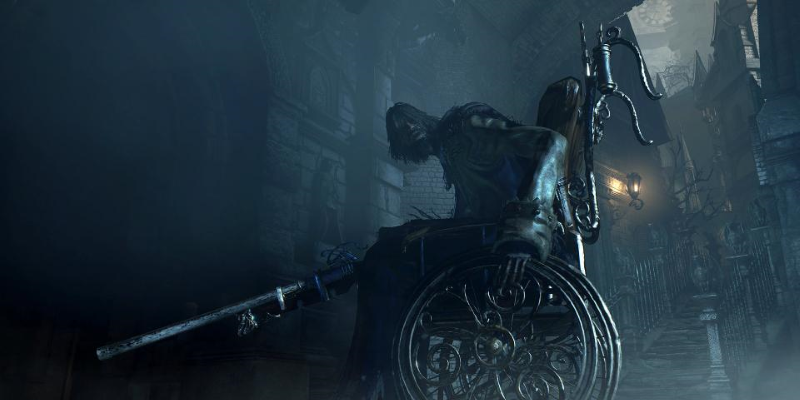 Bloodborne: The Card Game is a 3-5 player game, mixing elements of deck building, cooperative, and competitive gameplay. Each player is a hunter, one of those dedicated to destroying monsters, who has descended into a Chalice Dungeon. Chalice Dungeons are ruins that exist underneath Yharnam, the central location in Bloodborne. These dungeons are only accessible in the video game by performing rituals in the Hunter’s Dream, your home base, and require specific ritual components you must find or buy. In the video game, these dungeons are either set layouts or procedurally generated, based on the type of ritual you perform. You can also choose whether or not PvP can occur in them. If you allow it, you have the potential for better rewards, but much higher risk. The card game takes the latter of each possibility, becoming a procedurally generated dungeon that is always PvP-enabled.

The game setup is pretty simple. You first shuffle five Final Boss cards and select one at random. These Final Boss cards alter the way the game plays on a fundamental level (like the Old Ones in Arkham Horror). For example, Vicar Amelia sets all the max life of all players to six, instead of eight, while Rom the Vacuous Spider eliminates a player from the game the second time they die. Once you have done this, you prepare the dungeon. You shuffle the Monster cards, then draw seven. After this, you shuffle the Boss cards and draw three. Next, you combine the ten selected cards and shuffle them. Each player receives a small deck of action cards consisting of three weapon cards and two utility cards. The final deck prepared is the Hunter Upgrade deck, which is shuffled, and one card per player is turned face up.

The objective of the game is to be the hunter with the highest Blood Score at the end of the game, which occurs after the Final Boss has been defeated. It is possible this might not occur, in which case you all lose. In the event two people have the same Blood Score, you both win. You increase your Blood Score by procuring Monster Trophies from kills, and by obtaining Blood Echoes. You earn one Blood Echo per point of damage you deal to a monster. However, if you are slain before you are able to return to the Hunter’s Dream, by playing an action card on your turn, you lose any Blood Echoes you might have. Once you return to the Hunter’s Dream, any Blood Echoes you possess move to your bank, where they cannot be lost. This is harder to than you think. In true Bloodborne fashion, you die… a lot. 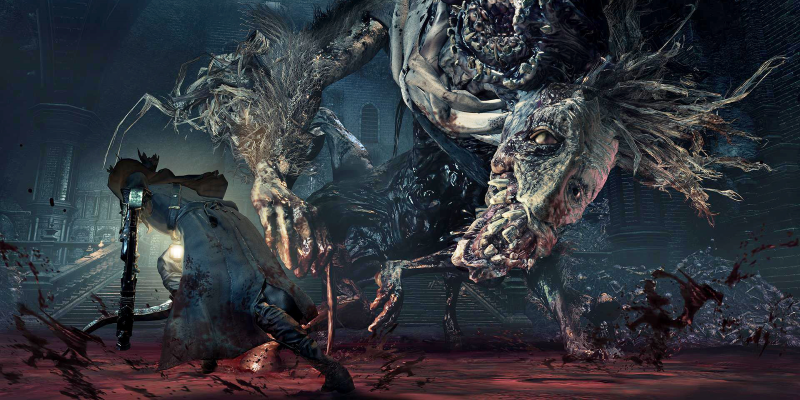 Gameplay is fairly straightforward. All players select one action card. The starter action card deck is one ranged weapon, two melee weapons, a transform weapon card, and the Hunter’s Dream card. Once that is done, the players all flip over their cards. If the players played Transform, they get to then decide what weapon they will use after seeing everyone else’s cards. This important because the Hunter’s Pistol, the starting ranged weapon, has an ability that says it deals damage instantly, provided it is the only Hunter’s Pistol played this turn. Dealing damage gives you Blood Echoes, and if the monster dies before it gets to you, you don’t get to deal it damage. There are other cards where order matters, as well, but you get the idea. After transforming, you resolve any instant effects on the cards. At that point, the monster attacks. Monsters deal damage to all players, and roll dice based on the color indicated on the monster card. If the die result has a + sign on it, you roll the die again. Damage can get…intense. Cards can modify how much damage you take, of course. Once the monster deals damage, hunters that are alive get to deal it damage, starting at the player with the First Player token, going clockwise. The First Player token rotates after every turn. If the monster is alive at the end of this step, the monster escapes. Boss creatures do not escape, and instead you move to the next round and fight it again. Monsters escaping is bad, as no one gets a trophy from it. Trophies are handed out to everyone who participated in the kill, and the more trophies of a certain type – out of three – you collect, the higher Blood Score at the end of the game they reward.

Now, earlier I mentioned that the game is pseudo-PvP. This is true. When you play certain weapons, you passively screw over the other players. A weapon that deals high damage might also deal damage to everyone else, as well. It might also stop any ranged damage from being dealt, in order to ensure that you deal damage to the creature, and not others. This is really rude. Sometimes, you steal things from other players, if they have it available. However, this is all tied to stuff you want to be doing anyway. So yeah, it’s PvP, but it’s PvP that occurs because you are trying to PvE. I mean, it’s a big part of the game, but it’s only intentional to a certain point. The game is so brutal that you better be really sure you can survive if you go out of your way to bone people. Mostly, it will be more along the lines of “I deal two damage, also you all take one damage, sorry guys.” It’s something you have to be aware of, but it will rarely be the game focus, if you understand me. 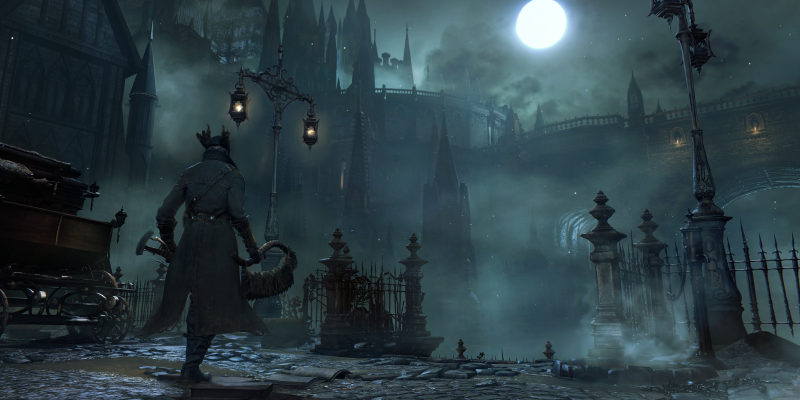 All in all, it’s a really fun game. I love the world of Bloodborne, and the video game, but I feel I do an ok job about being real about things I like. We played with four people, and everyone had a good time, and was ready to play again right away. The game only took around 30 minutes to play, so it’s not too much of a time sink, and you can get several in over the course of a few hours. The only real problems are a few cards that you might end up house ruling. The Beast Claws are particularly problematic, as they deal great damage AND put you in the Hunter’s Dream each time you use them. To compound things, these are limited, so if you are lucky enough to purchase them, you are putting yourself crazy far ahead. There is another item that allows you to ignore all damage this round, which is a similarly strong and limited card. The other problem is the game needs probably one good errata to work on its wording. It needs to do a slightly better job of using terminology to prevent confusion. The word “total” is used in a few places, each referring to different things. So, when a card interacts with your total of something, it’s not necessarily clear what it is. Thankfully, this doesn’t come up all that often.

If you are a board game, card game, Victorian Gothic Horror, or Bloodborne fan, I definitely recommend this game. If you are looking for a purely cooperative game, you should give it a pass, but if you can handle the dual nature of it, then go for it. I had a blast playing it, and it’s already being mentioned regularly as a game we would like to play again in the future. Give it a chance, and let me know what you think!