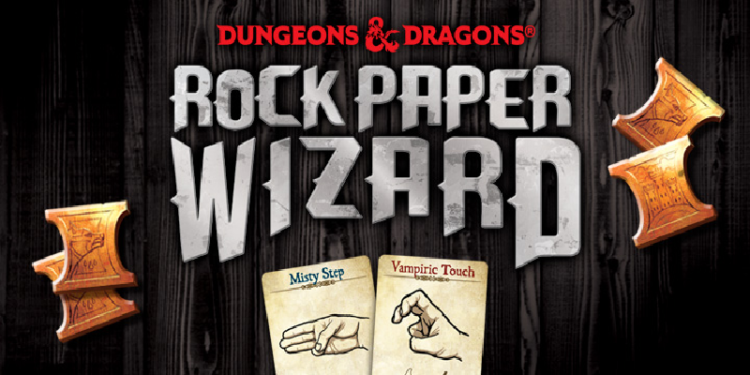 Cast spells and compete against other wizards in an epic race for loot! Rock Paper Wizard is an exciting party game for 3-6 players! Rock Paper Wizard allows each player to compete against each other with casting spells using simultaneous hand gestures. Each hand gesture allows your Wizard to get closer to the gold, push other wizards farther away, or allow gold totals to change.

WizKids is excited to introduce Rock Paper Wizard, a fast 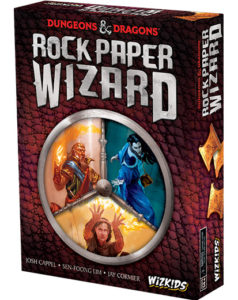 In Rock Paper Wizard each player competes against a powerful wizard!

In this brand new Dungeons & Dragons edition of Rock Paper Wizard your adventuring party has just defeated a fiery dragon in a treacherous cave. Now you and your fellow wizards argue over how to distribute the shares of treasure left behind and do what every self-respecting wizard does, initiate a spell battle!

Choose your wizard’s spell and cast some magic by repeating one of the hand gestures found on the cards in front of you. Everyone says “Rock, Paper, Wizard” aloud, and upon saying “Wizard”, forms a hand gesture and points it towards a target. Each card describes the spell’s effect, which can push an opponent towards the exit, advance yourself towards the hoard, or manipulate the coins each wizard must collect to win.

I was able to play this game several times, and I found that it is quick & easy to learn. The rules are arranged in a great way to learn and go back and reference a round of actual play. The cards are large and super high quality, with gold pieces that are themed from Forgotten Realms. After the initial few games, the game got more intense as we increased our strategy, and having loose alliances to push back on the wizard that was in the lead. A typical game ran us about 10 minutes, so we were able to play a bunch in a single night. Rock Paper Wizards is also a game that you can add to your board game night that won’t dominate the entire night. Or you can pull the box out while you’re waiting on late players to your D&D game, and it help pump-up the mood for some Wizardly D&D action.

A game consisted of several rounds where we would secretly choose a spell from the “shared” spell book. The spell book are the cards that are laid out for everyone to see. There is a little deception in this, because you don’t want to stare too closely at a particular spell and give away what you are planning to throw at someone. And you don’t want to cast the same spell that someone else is casting at you, or a Wild Surge can happen that will change the dynamic of the round. Or it’s possible that you could even end up casting your Fireball spell at yourself from someone. At the end of each round, gold is passed out as determined by the closest wizard to the dragon hoard. Wizards are then moved and if no one has 25 gold pieces, another round is played with the First player token moving to the next player. I found that it was easy to add more players even in the middle of a game. We just gave them a few gold pieces and put them at the starting point on the board.

I highly recommend getting this game because I thought it was very fun, and I really like D&D themed games. If you like quick game that is easy taught to new players, then you should pick it up! Rock Paper Wizards comes in an easily transportable small box. I imagine it is possible to add some more spell cards if you are the creative type, and have some D&D books that you can use for ideas/reference and can think of some crazy hand gestures to go along with them. You can even add WizKid D&D miniatures to play as your Wizard on the game board and replace the Wizard markers. The Wizard Markers are highly detailed with different wizards, runes and colors. But I found that they can be a little hard to differentiate on the game board. Perhaps the clear plastic bases can be painted or marked in a way to help with being able to tell the Wizard Markers apart. 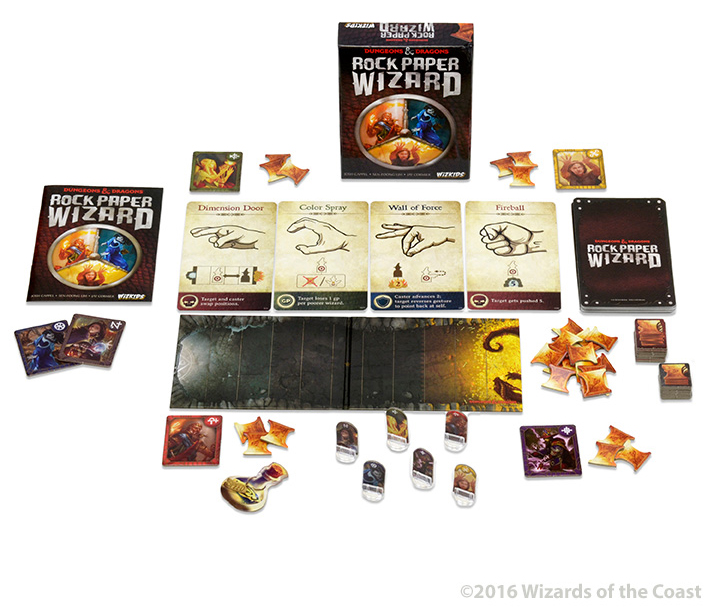