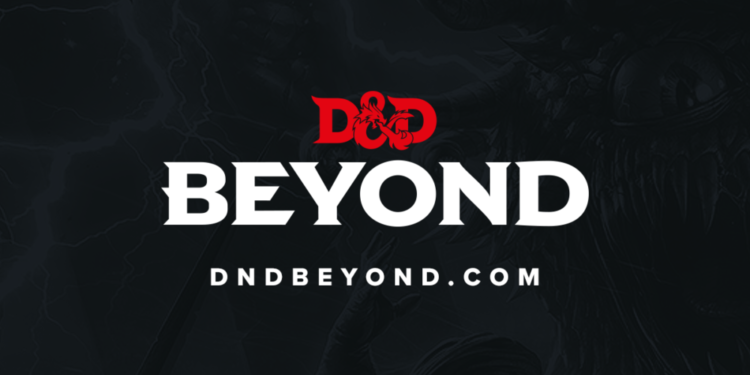 I have had the great pleasure of corresponding with Adam Bradford, the D&D Beyond product lead for Curse. We had a Q&A conversation about the upcoming D&D Beyond product for Wizards of the Coast. I see a lot of positive features from this application for my personal game that I run outside of my house. This will also help me, because I will have a lot less books being lugged about, and easy reference of materials when I need them. But I will need diligence on my part to plan & remember to charge up my Apple iPad before heading out the door. 😉

I’ve compiled some of my questions along with Adam’s responses over the past few days. I hope that these will answer some of the initial questions that everyone is having. I am super excited about the upcoming Beta version being released soon for everyone to be able to see the utility in having a mobile application that we can use at the table top.

How did the Alpha testing go? What changes were made? Lessons learned?

Alpha testing went well and prominently factored into what will be available in the beta. We made too many changes to count after we started using the tool set at the table. We aren’t developing this in a vacuum – we’re always learning and want to hear and act on community feedback. DDB is “for” players and the game – if we don’t deliver a product that accomplishes that goal then why bother? I encourage everyone to share feedback about how it works at your table in the forums once the beta begins!

When should the Beta emails start going out? Are you excited about the response from players requesting access?

We will announce beta plans very soon – looking forward to letting the community try some of this out.

We are terribly excited about the response for beta signups – it’s humbling to see this many people interested in what we’re making. It’s further indication just how much D&D is in the Zeitgeist in a major way today.

I’d like to know if you can share any other photos before the Beta is released into the wild?

I can’t share much in the way of additional images yet, but I’ll do a minor tease with a couple of the site’s core listings and filters (Spells, Monsters – click to enlarge). Different sections of the site will have different colors to make it simple to know where you are at any given time. 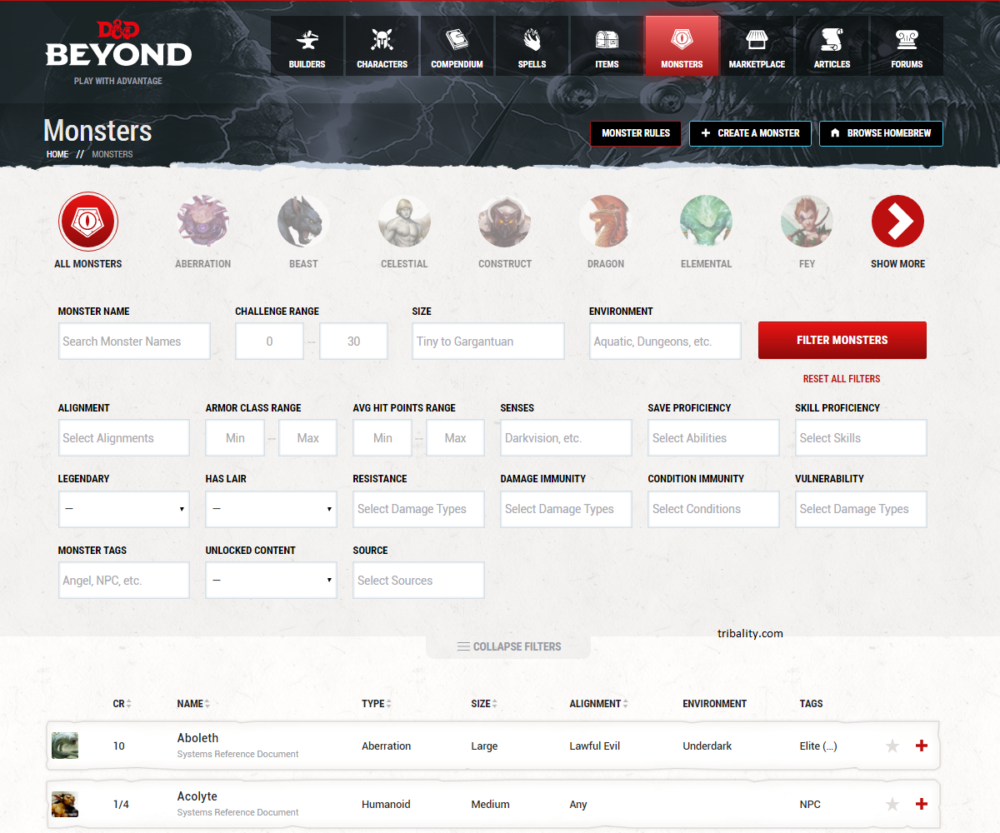 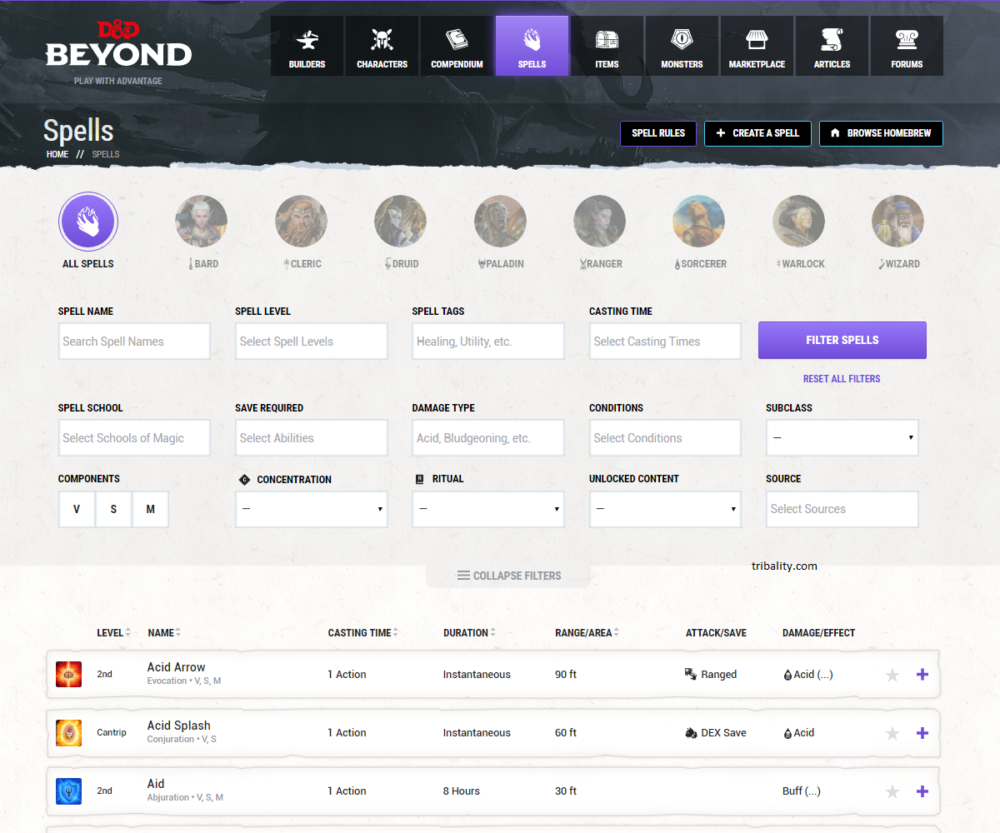 Can you tell us more about what to expect?

As far as what to expect for D&D Beyond, we aim to provide a high-quality, efficient, visually-rich, and comprehensive digital tool set that will make game management easier. I’ve played (and adored) Dungeons & Dragons for twenty-plus years, and we’re making everything I’ve wanted in my own games for over a decade.

We have all asked for a way in fifth edition to have that obscure rule at our fingertips immediately instead of thumbing through an index. The DDB compendium will remove the hassle of manually searching for content, but it is far more than a Ctrl+F. The way we’re organizing core components into listings (Spells, Magic Items, Monsters, Backgrounds, Feats, etc.) allows players to dig deep into comparing spells, finding the right monster for an underwater encounter, or trying to collect every type of headwear item in the game. I have personally spent (many, many) hours poring through every spell, item, and monster to parse meta-data out that can be filtered. Want to see every spell that requires a Charisma saving throw in the game? Or every healing spell? Every spell that does force damage? There’s no easy way to do that now and the compendium listings will let you do it. You’ll also have the convenience of rules, lore, and adventure content in one easily-searchable place. And of course what’s in the compendium is not limited in any way – you’ll be able to access all the official content.

Will the content only be available while the device is connected to the internet? Will there be some offline capabilities?

I can’t talk about that part quite yet, mostly due to the fact that whatever I say at this point would be met with more than a healthy dose of misconception in the community. We have a license that does not restrict how we deliver the tool set – it allows us to provide it using any technology on any platform. All will be explained on that front soon!

What I can say is that we are fully aware of the offline capability concerns and are working to mitigate those concerns. I know that convention (or sometimes deep basement) Wi-Fi isn’t reliable and I can assure you that people will still be able to play their characters in those circumstances.

I’m seeing some push-back from old school players that don’t want to convert to a digital medium for their table top games, how can we convince them that this is going to be a time saver?

The thing I would stress the most is that DDB isn’t trying to take over your game, turn it into a video game, or diminish the player interaction that makes D&D the best game in the world – the goal is to support, save time, and enhance so the focus can be more on telling an epic shared story with friends and less on math, remembering you have the poisoned condition, or grinding​ the game to a halt while you confirm how shoving a creature works. I’ll save talk of the character builder and the character sheet for a later day, but we have been playing with it at the table and can’t wait for everyone else to get to take them for a spin.

I run a weekly game in our office (basically D&D has taken it over) and I’ve used the compendium listings for a couple of months for testing. Last week the listings were down for some pre-announcement maintenance and I couldn’t get to them at the table. It was miserable! I was able to see first-hand how much time they save me and how much they have enhanced the play experience.

Is there a planned schedule for release of final product? A big reveal date?

This will not be another scenario where something like this is announced and you don’t hear anything for six months before you get a few screenshots. We’re going to start beta (very) soon and launch this summer. We’ll announce a specific date a little further down the road!

Thank you so much Adam for your time, and I think this will be a very successful project for Curse & Wizards of the Coast, and a very useful tool for all of the D&D fans out there.

We are all waiting in anticipation for those first Beta Emails to arrive. Thanks! ~ Michael

Curse is a global multimedia and technology company focused on creating content and products specifically for gamers. Curse provides information and tools to help gamers better enjoy all aspects of their gaming lifestyle. Curse, Inc. reaches over 50 million people every month through its portfolio of web properties, video channels, social media channels, and its desktop application – the Curse Client.