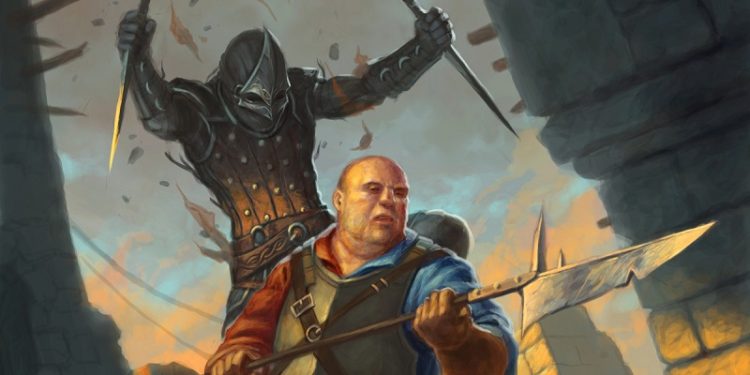 Lately, I have been focusing my campaign on using more passive perception and passive investigation so there aren’t as many die rolls. I’ve stopped asking for so many skill checks, and instead rely on a listing of the character’s ability scores & skills to make determination of success or failure. And this helps in describing the environment to the players, because I can instantly decide to give more information based on their character’s information.

So we get Passive Skill checks from D&D 4th edition. It is a useful tool for the DM to add to descriptions and help make the game a little faster. The Passive Skill allows for a floor for things like Perception and Investigation. The party of characters go into a situation, and their passive scores dictate their initial scene. If one of them decides to actively search or investigate, then their skill roll would only “matter” and add to the description if the result is higher than their passive score.

So now, only when a character attempts an action that might fail, I’ll ask them make an ability or skill check. If they get a higher result than their passive score (rolling on the die higher than 10), then I can give them more information or succeed at the task. But remember, the trigger for the die roll is a player telling the Dungeon Master that they are performing a specific action that might fail. You might have a player that takes an action with a skill so that they can roll, but if you get in the habit of describing and using passive checks, they might stop making so many rolls.

PASSIVE CHECKS
A passive check is a special kind of ability check that doesn’t involve any die rolls. Such a check can represent the average result for a task done repeatedly, such as searching for secret doors over and over again, or can be used when the DM wants to secretly determine whether the characters succeed at something without rolling dice, such as noticing a hidden monster.

Here’s how to determine a character’s total for a passive check:
10 + all modifiers that normally apply to the check
If the character has advantage on the check, add 5. For disadvantage, subtract 5. The game refers to a passive check total as a score.

For example, if a 1st-level character has a Wisdom of 15 and proficiency in Perception, he or she has a passive Wisdom (Perception) score of 14.

A typical example of using Passive Perception is seeing a creature that is hidden in a room:

We have a Goblin that has hidden in the darkness of a room that the characters have entered. The 11th Level Party consists of a Human Cleric, Halfling Rogue, Half-Orc Fighter & Elf Wizard. The characters have passive perception scores of 15, 20, 9, 12 respectively.

The Goblin has made a Dexterity (Stealth) check of 18, and is hiding in a part of the room with dim light. I have all of the character’s passive perception scores, and I note that each character without darkvision gets a -5 from their passive perception to notice the Goblin [PHB 183]. This results in passive perceptions scores of 10, 15, 9 & 12 (same order as above). I can quickly look down at a sheet, and know if the characters spot the Goblin with out anyone rolling a die. I describe the room in enough detail to satisfy the passive ability scores. Whichever character has the highest passive check (The Rogue), I will let them know they see a little bit more details than what I gave out to the other players. But the goblin just stays hidden because all of the character’s passive scores fall below 18 with the highest Passive Perception against the hiding Goblin is a 15 for the Rogue [PHB 177].

A character may take an Action to attempt a higher score than their passive. And if they get 18 or higher, then they will see the Goblin. So the Rogue decides to search the room and check the dark areas [PHB 178], and will roll at disadvantage because of the lightly obscured areas (dim light) [PHB 183]. Without specifically saying they are searching the dark areas, the goblin would stay hidden. The action of searching has to be specific in order to determine the chance of success, and not a generalized “I search the room.” because that was already done with their passive perception. The Rogue rolls a 7 and 15, and that result of 7 is brought up to a 10 because of Reliable Talent [PHB 96]. The Rogue spots the hiding Goblin in the dim lighted area with a result of 20 on his Wisdom (Perception) check.

We have an example of Passive Perception skill, but there are other ways that I can use the characters ability & skill scores to allow more passive checks. Below are some examples, not all of these skill have explicitly follow their Ability score counterparts (see Variant: Skills with Different Abilities PHB page 175), but these are just typical:

These are all just examples, and I am sure there are others that might be better than the ones I put together. Please let me know what you think. and I can always add to these ideas.

EDIT: added some clarifications and additions that you’ve suggested. 🙂