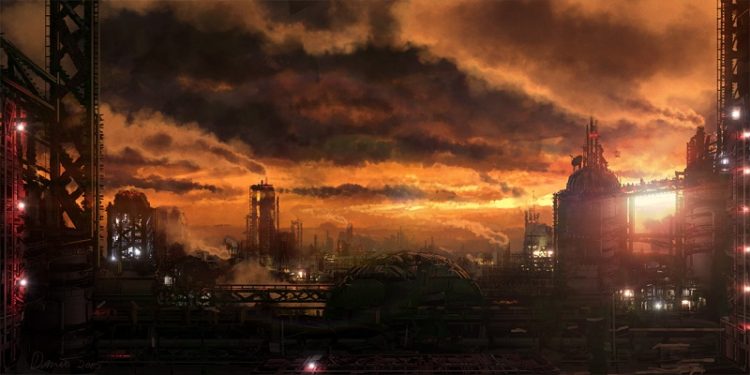 “Pollution?” I can hear you asking “why should a real life trouble like that be an interesting hazard in a RPG game?” But if a DM plays it smartly, it can turn a hum-drum thing in the background into something exciting, dangerous, worthy of attention by looking at reasons why your game world might be so polluted and ways such pollution might affect the game.

Before we begin, let’s define pollution as the introduction of contaminants into the natural environment that cause adverse change. These contaminants may be caused by technological, magical, or divine in nature. It should be noted however, that the components of pollution, can be either foreign substances/energies or naturally occurring contaminants.

D10 Reasons Why Your Game World Might Be Polluted

1. War of the gods: far in the past there was a war that caused an entire area to become uninhabitable. The force of the god’s fight could have so warped the landscape to make it so alien that it hurts or sickens, or lowers the level of anyone who dares enter into the area.

Likewise, if a god died and fell to the earth, such a body could cause damage to the surrounding area in that the earth was not designed to contain such power. What happens when a person or a group of people could somehow access the power of the dead god? How would their very natures be changed? They could take on aspects of the dead god’s ideologies or domain/ portfolio, its powers or abilities or some aspect of its physical nature.

2. Magic or Science Experiment Gone Horribly Wrong: Perhaps a sorcerer was trying to cast a new spell and the magical energies got out of hand and laid waste to an entire section of land. Similarly, in a science fiction setting, you might have an entire area that may have become uninhabitable due to the release of a biological agent (think “mutagen) that warped the life essence of everything. Anything alive that enters the area is affected by what caused the damage after awhile, warping it to its purpose.

In a similar way a well-known spell could have been cast, but other forces at work caused it to unravel and “go wild,” resulting in this area where it’s dangerous to cast magic because any future magic will have greater chance of “going wild” than normal. Even if magic users can cast spells in such a place, it takes more power to be able to wrest them into what they want them to do.

3. The results of a sacrifice: In C.S Magister’s Trilogy, it’s discovered the Spears of the gods in the Wrath are witches who were sacrificed (either willingly or not) to create a “no man’s land” to protect the rest of the world from the Souleaters. In his series it takes a special bloodline to even approach these Spears. Even those who can are not immune to the nightmares and the extreme sense of unease that they cause, and even animals are unwilling to approach them.

Similarly, in your game a cult could have sacrificed many people to bring back an evil deity long ago and the horrible results of it are still present to this day. Due to the befouling nature of the summoning magic, priests may find it difficult or impossible to have access to their divine powers.

4. The results of “normal daily life:” in daily living regardless of what time era you’re in, it’s almost impossible not to cause some sort of waste: from burning cooking fires, to driving a car. Even in Star Trek they discussed what the over use of warp drive technology could do to the fabric of space. In each of these cases, the warning exists for the society to take measures in order to lessen the damage. In this case, part of the storyline could be trying to make people more aware of how their choices impact the environment and how small changes by everyone can really make a significant impact over time.

5. The Results of a Disaster: In modern society, we live in has many modern conveniences: electricity, running water and sewage, natural gas delivery. What happens when the community’s nuclear power plant gets destroyed due to an earthquake and radiation fills the area? What happens when the sewage treatment plant can’t keep up with the volume of waste and releases untreated waste due to flooding? People can get sick and die. If the PCs are in this situation, they may be among refugees, in a group of relief workers or a governmental officials seeking to assess the damage that was done.

6. The Results of Nature: Sometimes natural processes in and of themselves can create pollution, as in the case of termites, the pollution from which exceeds smokestack pollution. Don’t believe it? Read about it here.

Another way that nature could be polluting the air is due to ash being spewed out by a formerly dormant volcano. If allowed to continue, or if the entire top of the mountain gets blown off, it could change the weather patterns in the area for months to even years down the line. It’s up to the PCs to investigate what’s exactly going on and what, if anything they can do to stop it.

If the natural pollution is affecting populations of people it might be up to the characters to move or kill the things that are making the pollution or find ways of mitigating its effects somehow.

7. Ancient evil trapped: In J.M. Perkins’ system neutral idea of having a trapped Tarrasque, whose bodily fluids leech into the ground polluting everything. If you want to read his write-up on the idea, it can be found here

This idea harkens back to the ancient Greeks with Prometheus, being chained to a rock by the gods for stealing fire 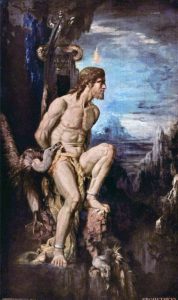 and giving it to mankind. An eagle would come and eat his liver away, where it would regrow back the next day to be eaten again anew. The chained Prometheus would certainly leach something out into the ground while thus chained.

8.Polluted on purpose: Sometimes an army will come through an area and salt the ground so that their enemies can’t use the ground to grow crop. Taken a step further, depending on the magical or technology level, the ground itself could be made to be permanently unusable by making it so unstable that it can’t even be built on.

In modern life this can show up as a company purposely polluting the air, water, or disposing of something in an unapproved landfill that pollutes the land in order to save money. In this case, communities downstream could be affected, or an even entire community could have severe birth defects, problems breathing, or with food grown, as it’s either not as nutritious as it’s supposed to be or, in fact, is harmful to consume to do the poisons in the ground. For such cases, the characters may need to uncover what’s going on and why.

On the other hand, it could be polluted to make it habitable for some race, but it doing so it could be uninhabitable for all others. There have been lots of cheesy monster movies where some alien or monster wishes to make a city or the entire planet its new home. If this is the case, it’ll be up to the players and their allies to drive it off.

9. “Standard” warfare may be another reason why an area is polluted. During the Viet Nam war the US military used a chemical called “Agent Orange” to deforest the area. To this day, the aftereffects of this chemical are still being felt by the Vietnamese people in the form of birth defects that affect them both physically and mentally. In WWII the atom bomb was dropped, devastating the cities of Hiroshima and Nagasaki in Japan, the results of which can still be seen today. Likewise in a fantasy setting there could be remnants of a spell that have affected the populace of a location for generations.

10. An Abandoned civilization or a long lost race could have left things laying around that over time have broken down, damaging the air, water, and soil. This can be something as simple as the building materials were toxic and have begun to rot, damaging the soil. Conversely, a fire may have been set purposely or been caused by a natural force like lightning, burning the entire area. In modern life, there’s so many materials that are deathly toxic if fumes from them being burned are breathed in.

What caused the civilization to be abandoned may be because there was an advancing army and it was simply easier to flee than to fight, that what the civilization was doing was inefficient and simply died off, or another civilization came in and subsumed them, and in the process they moved from the area.

In this situation, the player’s job might be to find out what happened to the civilization and why.

Next time you notice that the description in your game’s storyline describes an area that’s been polluted, instead of leaving it as a piece of background information that you do nothing with, consider how you might use it to add interest, plot, or purpose to your game.

More on pollution in your game next time.