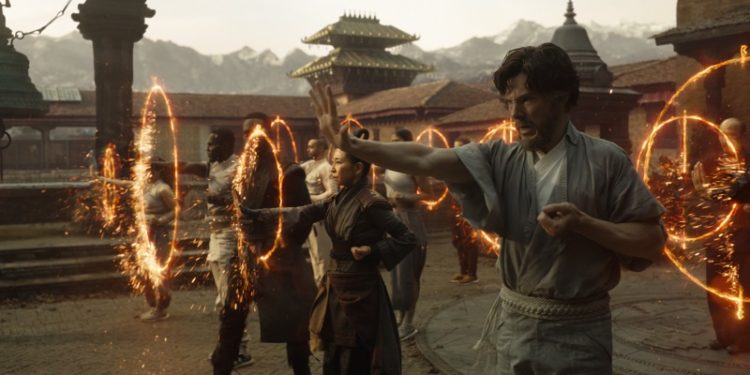 We come now to the monk of Fourth Edition D&D, which as I have been hinting for a long time is a very unusual presentation of the class. In the source-role jargon of the edition, it is the only Psionic Striker class they released, but it has nothing in common with other Psionic-source classes – no psi pool, and their ki is not a class currency in any sense. And that’s just the beginning…

First off, my image choice for this article: I finally got around to seeing Doctor Strange, and the 4e monk does a way better than average job of representing the monk/wizard dichotomy of the movie’s characters. Since this is 4e, there’s a huge variety of powers, and if you really wanted to go all-in, just allow characters to play 4e monks but also pick up a smattering of wizard spells. As long as you’re creative in resolving the attribute dependency of each power, Doctor Strange turns out to be one of the best 4e-flavored movies ever filmed. (I loved the movie, and I loved 4e back when we played it, so I mean this as dual praise.)

The thing is, there’s nothing actually going on in the monk that defines it as psionic, other than the fact that it’s clearly not simply martial – the damage types and effects are too overtly supernatural for 4e’s approach to the martial source. Psionic Power goes in another direction with this, with some powers that barely fit the monk but are strongly psionic-themed. Let’s start with core features.

The good side of this class is that it’s stylish, flashy in ways that suit its fiction, and as far as I can tell, pretty good at its job. The down side is that it is 4e at Peak Complexity. Many of the powers offer inspiration for 5e monk features – not 1:1, maybe, but interesting ideas. Overall, I like what I see here (despite its complexity), I wouldn’t mind seeing ki focus items show up in 5e in some form, and I sort of miss Cloth as a viable, scaling armor group beneath leather. (I’m well aware that bounded accuracy makes this a non-starter, don’t worry.)

What we don’t see in 4e is any clear suggestion that monks come from an Asian-inspired culture; at most, the philosophy is more in line with Asian teaching than Greek and Roman philosophy. Because they aren’t locked into some of the more mystical (and often ribbon-ish) high-end features like Timeless Body and Perfect Self, it’s much easier to treat these monks as semi-magical brawlers, dancers with strange and secret powers, or the like. The features they do receive may inspire an alternate collection of those high-end features, if the 5e monk doesn’t fit your setting very well.

Now I turn this to you, O my cherished readers: are there other presentations of the monk in tabletop gaming that you would like to see in the next article in this series? When I write the article for 5e, that’s (usually) the end of the series for a particular class, but since this is only the fifth article on the monk so far, I’m happy to push that back by a few weeks. (Safely assume that I don’t have a copy of whatever you’re suggesting.) Whatcha got?

Also, as usual, if you played a 4e monk, feel free to share your war stories about that character here.