D&D 4eEberronHistory of the Classes 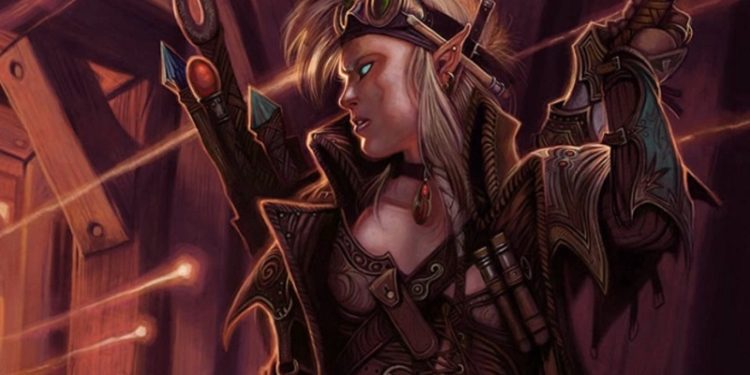 Now that GenCon 2019 is done, I can come back to the History of the Artificer. This week we’re taking on 4e and the Eberron Player’s Guide. By coincidence this is the one version of the artificer I’ve seen in actual use at the table. (There were no artificers in the one 3.5 Eberron campaign I played.)

This is the second Arcane Leader class of 4e. Making the artificer a Leader is a little bit of an odd choice if you take only a surface look at the 3.5 artificer – no obvious healing features other than repair light damage for construct repair. Healing is, after all, the core of the Leader role. On the other hand, they are superlative buff casters. Further, a wand of cure light wounds is the de facto short rest mechanic of 3.5, and artificers are great at using those, and making them at 7th level. The artificer’s secondary role is control.

In the 3.5 article, I didn’t really get into the whole dynamic of repair light damage and warforged needing different types of healers than other characters. It’s a significant part of the challenge of playing a warforged in 3.5 – you’re dependent on arcane casters for your healing.

The narrative of this class is nominally the same as the 3.5 artificer, but the nature of 4e classes and powers makes that hard to support. That doesn’t mean it’s bad – far from it! It’s just that a power that makes a magic item that you use instantly, or that charges your existing weapon with a function that you use immediately, doesn’t feel anything like taking large stretches of downtime to plan out which magic item tricks you’re putting in your toolbelt.

The two suggested builds are the Tinkerer and the Battlesmith. These signal the stories they’re trying to emphasize with the class. Tinkerers use Wis more than Con (so Wis powers are contributing more to this story), while Battlesmiths are the opposite. The main difference that the text talks about here is that Tinkerers make arcane constructs, while Battlesmiths do more with weapons and armor.

As usual, I won’t be covering the artificer’s powers individually – in the ECG alone, there are enough to keep me here all week. Let’s hit a few high points, though, because they’re interesting and weird. I can’t help but notice how much of the flavor text of these powers would fit seamlessly into the runepriest. That’s not a bad thing – it suggests a society and aesthetic where two of the main spellcaster types operate on magical runes.

It’s not hard to read these paragon paths as the precursors of subclass concepts we’ll want to see in a 5e artificer. The ECG gives us the Alchemist Savant, the Battle Engineer, the Clockwork Engineer, and the Self-Forged. The Alchemist Savant does pretty much what it says on the tin. I love the idea of its spell magnet that reduces your enemies’ defenses against your arcane powers. The Battle Engineer favors weapon-wielding artificers – to my eyes, all but indistinguishable from a swordmage with the Leader role. The Clockwork Engineer goes deep on arcane constructs. The Self-Forged lets a non-warforged artificer upgrade some of their meatbag parts, starting with a battlefist to smash things to death with. Oh, and one more: the Cannith Mastermaker isn’t explicitly an artificer paragon path, but it’s close.

Of these, I dearly want to see a 5e Self-Forged artificer subclass, or maybe a feat, because… uh, it’s Robocop in Eberron. How could I not want to see the magitech of Eberron cross into cybernetics? The Alchemist Savant is already a subclass, while the Battle Engineer and Clockwork Engineer get remixed considerably into the Artillerist and the Battle Smith.

I’m not covering it here, but there’s a cool traps-based artificer build in Dragon Magazine #403, by Doug Hyatt. Characters that go deep on building and using traps in combat are hard to do well, but I’d still love to see support for it in the 5e artificer.

Why was this class as popular with my gaming community as it was? Once you and the DM agree that your crossbow is just a rules representation of a shotgun, the appeal explains itself. It’s also an incredibly varied class – never topping the charts on damage output, but that’s literally not its job. For healing, buffing-with-damage, and utility, it’s phenomenal.

It formally covers the same bases as the 3.5 artificer, but inverts the amount of weight that it gives them. All of those 4e attack powers stand in for the 3.5 version’s infusions. Infusions are a major part of the 3.5 artificer, to be sure, but it’s easy to lose sight of that as item creation feats rain down around you. The 4e artificer hides vast functionality under the Ritual Casting feature, while showcasing its attack and utility powers and other features.

The class fits in with other tinkerers, clockwork mages, and artificers if and only if you embrace the idea that they put in unspecified work during downtime, and exert magical power on that work to make it do all kinds of neat stuff in combat. Here in particular, the player and DM need to bring extra effort to the table to describe the artificer’s actions, both in and out of combat. Like every article in this series so far, this version uses subsystems that you could spend a ton of time, er, tinkering with. It gives players a huge amount of homework – or lonely fun, if you prefer – in order to play the class as intended.

Next time in the History of the Artificer, I’ll be covering Rich Howard’s alchemist, which includes the Artificer as a subclass. As of current writing, that will be the temporary end of the series, until WotC releases an official, final version of the class – presumably in both Wayfinder’s Guide to Eberron and the forthcoming Eberron hardback.