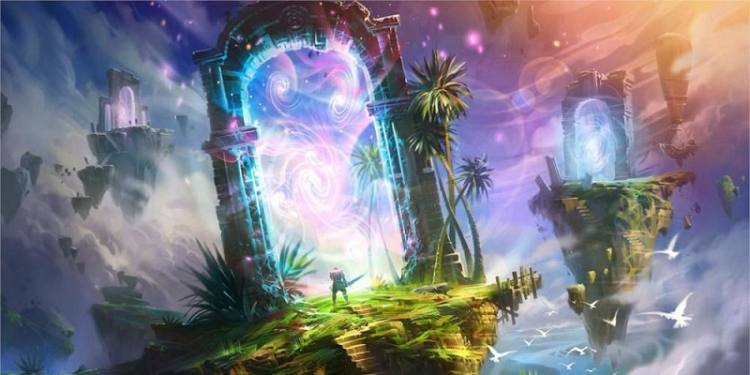 One of my favorite conceits of the Planescape setting is that anything might be a portal to somewhere else, and anything might be a key to said portal. For example, you might be leaving your inn with a bit of melted candle in your pouch thanks to staying up late to write a letter to a factol. As you leave, you see one of your exes that you would rather avoid. To that end, you duck into a shop you wouldn’t normally enter – who needs a designer scroll case? – only to feel that all too familiar feeling of losing all sense of direction and time as the multiverse swirls around you, depositing you in a place you have never seen before. Checking your pouches, you find the melted candle gone. However, you find your arrows are now glowing with a faint blue outline. As you inspect the rest of your possessions, a humanoid made of mist in a vest and bowtie approaches you and says, “Greetings, traveler. What brings you to the glorious tower of Heveshi the Grand, Lady of the Favored Stone, here on Tintibulus?” This sort of thing is not an uncommon occurrence within the world of Planescape, but not one that every DM is prepared to run. To help, here are lists of items that might be keys to elsewhere within Sigil, what those portals might be, and what might happen to you when you walk through them without further precautions – if it’s the sort of portal that isn’t properly stable or secure. Don’t worry, this is a short deviation from the ongoing Planescape faction backgrounds. We’ll return to those next time around.

Portals need be no less diverse than keys. While a doorway is certainly iconic and traditional – it’s a threshold marking one place from another – it doesn’t necessarily have to be that simple. Much like keys, the conceptual can join the physical quite readily.

Passing through portals – even if you have the right key – is not always the safest action. Sometimes the objects on you will be altered – for better or for worse. Sometimes you will find that you now possess a strange power or are now unable to readily perform tasks you were skilled at performing only moments ago. Stable portals do not often affect those who use them in these ways. In other cases, simply having the correct key will stave off the adverse effects of traveling through them. However, some portals are simple so unstable that they leave a mark on whomever travels through them. That’s where things can get complicated.