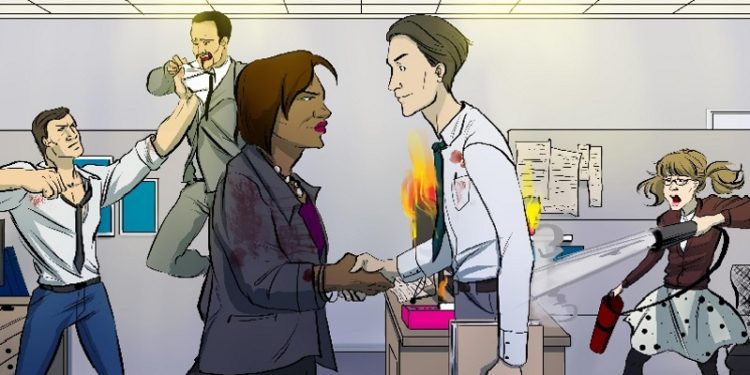 Through a mutual acquaintance, I recently met fellow Atlanta-area game designer Craig Campbell, creator of the Murders & Acquisitions tabletop game, part of NerdBurger Games, and co-host of the NerdBurger Show podcast. M&A successfully crowdfunded through Kickstarter last year, delivered in December, and is now available in my FLGS and through DriveThruRPG. Craig was kind enough to let me interview him.

Well, for starters, who is Craig Campbell, and what is NerdBurger?

I grew up a band geek in a small town in Wisconsin. I didn’t discover tabletop roleplaying games until my freshman year of college. Once I started playing, I didn’t stop. Over two and a half decades now. In time I started GMing and then designing my own stuff for the game I played. That eventually turned into a little bit of freelance RPG design, which turned into more. When a lull hit in my primary freelance gig, I decided to make my own game.

NerdBurger started as a podcast with my friend Mike. It’s a weekly dose of all sorts of geeky/nerdy discussion slathered over with a heaping helping of humor. Truth be told, it’s an excuse for us to get together with friends and geek out. It’s been running for over four years now.

When I started making my own game, it only seemed natural to name the company NerdBurger Games.

What is Murders & Acquisitions? Who is its target audience?

Murders & Acquisitions is an RPG of espionage, subterfuge, intrigue, theft, and murder set in an absurd, over-the-top corporate world. You play office go-getters looking to climb the corporate ladder by whatever means necessary, sometimes literally backstabbing your way to the corner office. It’s meant to be a loose, humorous game. Though I suppose you could play it dead serious if you want.

As for audience, that’s a tough one. Part of me says, “gamers love games.” So my audience is all RPG lovers. But some won’t dig on the modern day, seemingly mundane world of the corporate office. It’s definitely a niche game. But I think it’s one we haven’t seen before. In most games that feature corporations, the companies are the bad guy and you’re looking to take them down. In M&A, you’re part of the system, but doing everything you can to get to the top.

What were your core inspirations for the game?

The initial idea came from my friend Matthew. He described it sort of like a board game where you moved up to the top floor as you played. It felt a little like a re-skinning of Munchkin. Being an RPG guy, I took it that direction, with his blessing.

I tried to make M&A recognizable but different. The setting is the world we know, but with key differences to propel the story and set the tone. The archetypes and tropes in the game are things people recognize from their own office work (or from movies and TV shows about office life) and can latch onto easily. But it’s all injected with a twinge of absurdism and tongue-in-cheek humor. These were things I tried to keep in mind all through the design process.

I drew inspiration from a variety of games and media. There’s a list at the back of the book. For example, I often think of Murders & Acquisitions in terms of, “In the movie Office Space, what if Peter and his buddies had actual ambition and beat the crap out of Lumbergh rather than that printer?” American Psycho. The Devil’s Advocate. Wall Street. The IT Crowd. Workaholics. They all had some influence. There’s even a company in the game that has a very Paranoia RPG feel.

Your Kickstarter for Murders & Acquisitions reached $6000 on an initial target of $1800. What can you tell us about your strategy in pitching the game, in setting the backer tiers, and in planning stretch goals?

I kind of winged it. I knew I needed $1800 to cover remaining expenses for the core game and I would need more to cover some things if all the stretch goals (plug-and-play optional rules) made it into the game. Plus, I had a few friends who helped out with some things on spec. No payment up front, but they knew they’d get paid appropriately if the Kickstarter did well enough. And it did.

I had no idea what kind of traction the game would get, so I didn’t set dollar amounts for stretch goals right away. Rather, I introduced them as the campaign progressed. I had targets I was shooting for, but I kept the stretch goals reasonable to keep interest moving and make sure we added something to the game at regular intervals. I also used those milestones to announce various PDF support materials that were always going to be part of the Kickstarter rewards. A form-fillable characters sheet, rules one-sheet, adventures, and so on.

The backer tiers were based on research into similar campaigns. I knew how big the book was going to be and I reverse engineered a final hardcover price at DriveThruRPG.com and worked from there. The backer levels that got your likeness in an illustration in the book turned out to be a great idea. The first eight were snatched up within the first hour of the Kickstarter. I added eight more later so others could get a chance.

It’s strange. I planned the heck out of everything leading up to the Kickstarter in May of 2016. But a lot of the funding campaign was me flying by the seat of my pants. But all that planning made for a very efficient turnaround for the final product. I told backers I’d turn the game over by December, a seven month turnaround. And I did it.

How did you recruit the other folks who contributed time and energy to Murders & Acquisitions?

The folks who helped with game design, the layout guy, the additional graphics folks, and the graphic designer were all friends of mine. Many of them were among the number who agreed to do work on spec. I kind of treated the entire project like an experiment in a lot of ways. Some of the writers had a little experience; some didn’t have any, but were interested in writing for an RPG. My friend Andy agreed to make the character sheet as a way to teach himself how to create form-fillable PDFs.

My editors were people I knew from freelancing, both having experience in editing RPGs. I felt it was important for the editors to know the product type.

The artists were the rough spot. I posted a job to Upwork.com and Freelancer.com and spent a month wading through about seventy portfolios. I settled on using several artists in part so that I could turn over artwork faster after the Kickstarter ended. But, more importantly, using different artists with different styles allowed me to test out a lot of things.

The game is a bit of a hodge-podge of alternate rules, experienced and inexperienced designers, and different art styles. These were conscious choices.

You’ve got a healthy list of writing credits. How did you get your start, and what were some lessons you learned from those projects?

My first paid gig was a Living Greyhawk adventure titled, “Winter Tears,” which I wrote for Jason Bulmahn before he went to Paizo and was just an architecture student like me. In time, he opened a door for me to write a little more for Paizo. My name got passed to folks at Wizards of the Coast. A contact at Wizards got me some work for Iron Kingdoms.

It was very much a snowball of networking, doing good work, hitting deadlines, taking criticism and direction, and not being a dick. The RPG community is small. As more than one producer has told me, “Good work begets more work.” These are all good lessons to take away from this. Even if it’s “part-time, fun gig” for you, it’s your producer’s job…that they make their living on. Treat it like a job. Be respectful. Work hard. Hit your deadlines. Be persistent but not bothersome.

Maybe I’ll put that on my business card.

Craig Campbell
Persistent but not Bothersome.

Thank you for your time, Craig!