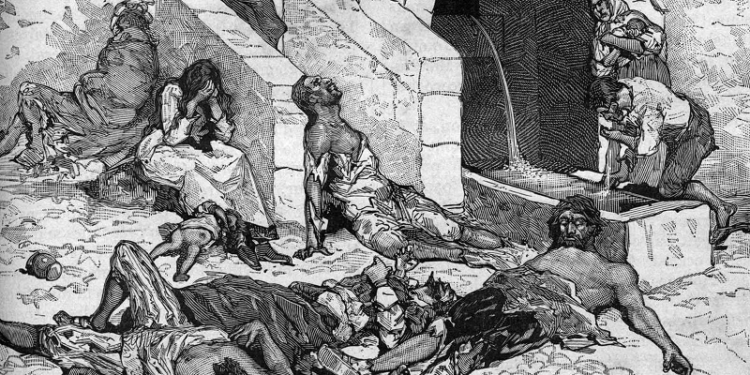 Disease is one of the strangest areas of D&D 5e. Each disease has its own discrete rule set tied to it, appearing as a side bar. Lycanthropy is a curse, mummies curse, the paralyzing touch of ghouls isn’t a disease, but aboleth give you stinky fish person disease when they wallop you with their tentacles. This all stands to make diseases unique within the 5e universe, given how rarely you interact with them, the limited ways in which to cure, prevent, or treat them, and the need to address them individually.

This sort of system gives us a tremendous amount of flexibility when it comes to creating new, bizarre diseases for use in outlandish settings such as Planescape. Of course, any new disease created should still keep in mind the very basic framework outlined in the diseases presented in the DMG. These can be summed up as:

With this in mind, here are three diseases one might encounter in the planes.

Method(s) of Contraction: Passing through unstable portals, cursed items, plane shift backlash, faulty teleportation circles
Difficulty Check: DC 12 Constitution
Incubation Time: Symptoms arise 1d4 days after infection
Communicable: No
Symptoms: Symptoms include skin becoming shiny and translucent, muscle fatigue, sudden appearance of stretch marks, and features becoming blurred and clay-looking for brief moments
Affliction: Whenever you are at or below half of your maximum hit points, you must make a DC 12 Constitution saving throw at the beginning of your turn. If you succeed, nothing happens. You become slightly out of tune with your current plane of existence. You are stunned until the beginning of your next round, but become immune to all damage and status effects for the duration of the stun.
Progression: At the end of each long rest, you can make a DC 12 Constitution saving throw, becoming immune to the effects of flickering sickness for 8 hours on a failed saving throw. On a successful save, the DC for this save and for the save to avoid an outbreak of the flickering sickness decreased by 1d4. When the saving throw DC drops to 0, you recover from the disease. A creature that fails three of these saving throws gains a level of exhaustion that can only be cured by greater restoration or a more powerful spell.

Method(s) of Contraction: Exploring old modron structures, encountering faulty modron, becoming wounded by modron carriers
Difficulty Check: DC 13 Constitution
Incubation Time: 1 day
Communicable: Yes; Any non-modron humanoid that starts its turn within 10 feet of an infected creature suffering from an outbreak of clock pox must succeed on a DC 13 Constitution saving throw or also become infected with the disease. Once a creature succeeds on this save, it is immune to outbreaks of clock pox from that particular infected creature for 24 hours.
Symptoms: Raised bumps on the skin that form geometric shapes; your mucus turns black and viscous with an oily sheen
Affliction: Whenever you attempt to act in a way that willfully breaks a law, proclamation, or decree from a lawfully recognized authority figure or body you must make a DC 13 Constitution saving throw. If you succeed, you may act normally. If you fail, you cannot take the action and immediately attempt to convince others that the course of action should not be taken. You also begin leaking mucus from your nose and ears as a sign of active outbreak.

If faced with official representatives of the ruling body in combat, you must make a DC 13 Constitution saving throw in order to act against them. If you succeed, you may act normally. If you fail, you cannot take harmful action against them – including assisting others that seek to harm them. You must spend your reaction on your turn to convince others of the error of their actions. You also begin leaking mucus from your nose and ears as a sign of active outbreak. You may make a new saving throw at the beginning of your turn to take action against the official representatives .
Progression: When symptoms manifest, you begin to cause compasses to malfunction within 5 feet of you, and you have a difficult time determining directions. You have disadvantage on Wisdom (Survival) ability checks to determine direction. At the end of each long rest after the symptoms appear, you become unable to reliably access knowledge that you possess. Choose one of the following skills in which to gain disadvantage: Intelligence (Arcana), Intelligence (History), Intelligence (Investigation), Intelligence (Nature), and  Intelligence (Religion). Curing the disease magically restores one skill to full efficiency, requiring multiple magical cures to remove the disease entirely.

Clock pox can be cured by discovering the source that caused the modron or modron structures to become faulty and either destroying it or mending it, as appropriate.

Method(s) of Contraction: Claws and bite attacks of creatures from the lower planes
Difficulty Check: DC 14 Constitution
Incubation Time: 1 minute
Communicable: No
Symptoms: Your skin develops blisters that exude smoke when popped.
Affliction: You cannot rest or regain hit points unless you are mostly submerged in cold water, buried in cool earth, or become resistant or immune to fire damage for the duration of the rest. If you do not imbibe a cold beverage or have cool substance applied to your skin every 10 minutes, you suffer 1d12 fire damage. This damage increases by 1d12 for every 10 minutes you go without treatment, returning to its base damage once you receive treatment.
Progression: After contracting the disease, it remains dormant for 1 minute, and can be cured by any magic that cures disease. After 1 minute, the disease can only be removed by heal or another disease-curing spell of 6th level of higher.