How to Run a Circus in Your Game: Part 2 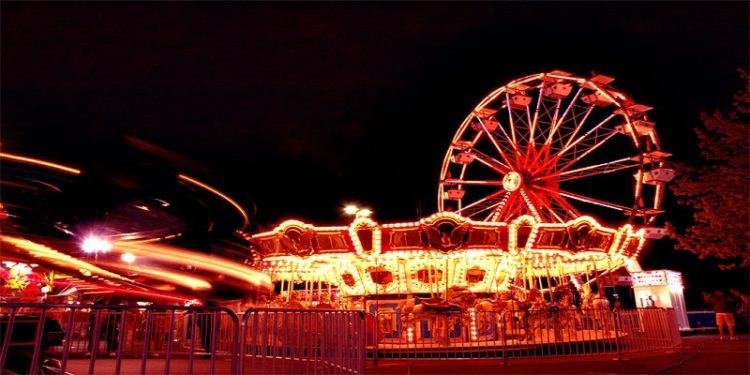 Last time we talked about the entertainers, this time we’ll get into more of the minutia of the circus in terms of travel, finding locations, time needed to set up the circus, battles within the circus, sound in the circus, and circus games and rides, as well as circus food.

Travel by the circus can be accomplished by one of several ways. The first way, is the most mundane, conventional. The circus packs up everything and takes it with them. In “olden times” this could be seen through the giant wagons that traveled from town to town. In a more modern setting, this is often done either trains or semis that have everything the circus needs to setup. In either of these conventional ways of travel, it is slow, and arduous. Scouts would have to travel ahead to find a location large enough to contain the big top (if it’s being used) and get permission to do so. In a setting that matches reality, there might be bandits that try to waylay it. In a more of a fantasy setting the circus might be attacked by fantastic monsters. In either case guards will be needed to protect it. That’s where the PCs come in. They might be temporary guards or an entire campaign could be built around the adventures surrounding the circus life. 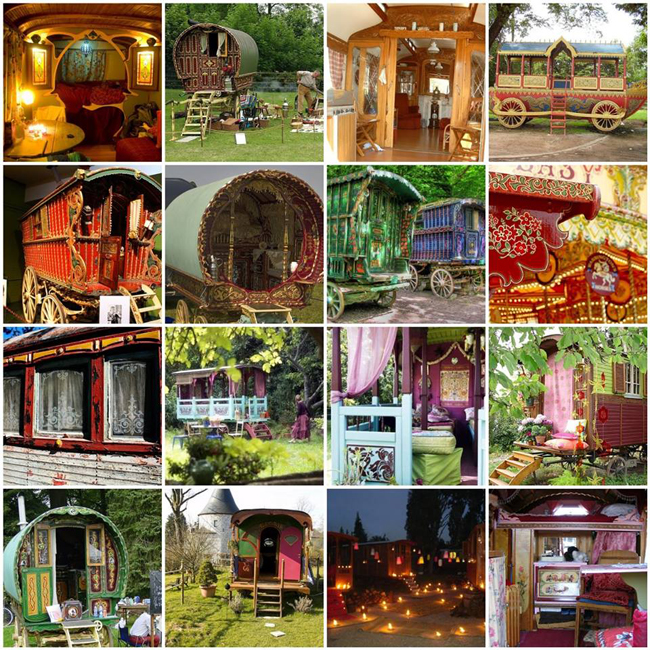 In a less conventional way would be what happens in Ravenloft, whereby the mists descend and swallow the circus and when they lift, the circus is in a new location. Conversely, there might be a giant ring of some sort around the circus that is activated at random or specific intervals that transport it to a new location. The magic could be such that anyone who is unlucky enough to be in its confines gets teleported as well, or it could be specific only to those that are a part of the circus and its acts. If it is the former, there might very well be tales of people mysteriously disappearing when the circus comes to town. If so, it’s a plot hook for the players to investigate.

Space needed for the circus

Circuses can range in size quite a bit. A small circus today that consists mainly of a variety of carnival rides and a small food court might take up the parking lot of a medium sized shopping mall. In medieval setting, the circus might literally be a ragtag group of itinerant performers riding on horseback with appropriate skills such as juggling, sleight of hand, tarot reading and the like. A much larger circus complete with animal acts, various contests, a “big top,” hall of mirrors, carnival rides, magician show, fortune teller’s booth, food courts and more might take up the area of a football stadium… or more. The more attractions that the circus has, the larger area the circus will take and the more difficult that it will be to find a place for them to go. In order to save the time and headache of trying to find a venue large enough to set up their circus, they will often have a route that they follow, and set stops along the way, with dates they need to be there by.
Having said that, some circus owners aren’t that organized and will lose track of the date that they need to leave by in order to get to their next destination or will simply not plan ahead for their next destination. With weather delays, detours needed by badly kept up roads and bridges, and the time it takes to take down the circus, a day or two’s delay can add as much as a week to getting to their next destination. 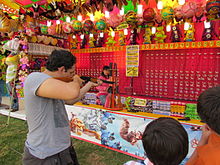 If the circus either doesn’t have prior approval to perform at a town or is too late or too early in getting to a destination, the local authorities may tell them they need to wait for approval, come back some other time, or keep moving. Some may allow the circus to stay if they’re appropriately compensated (read: bribed) for looking the other way while the circus performs. Provided that there aren’t any complications, this doesn’t really affect their bottom line, as many circuses will build those types of costs into their model.

Time needed to set up (and take down) the circus

The smallest itinerant circus literally would take no time to set up, in that they use a few props on hand and make do with what is found in the location where they’re performing, asking to borrow things from audience members, or buy small items there.
In the cases of a more elaborate setup, additional time will be necessary to set up and tear down the circus. If there’s enough help and everything’s well-maintained it could be set up in as little as a whole day (24 hours) to set everything in place, but that isn’t quite the whole story. Nowadays there’s inspectors for everything from making sure that the tent’s structures are secured properly to ensuring food service is up to sanitation codes, from making sure the rides are safe (and compliant) with local laws to making sure the circus’ taxes are paid – and everything in-between. In a more medieval setting, there could be some kingdom official who doesn’t like the way things are set up and thus hinders it opening in a timely manner. But on the other hand, if the attractions aren’t safe, if there’s incidences where people are seriously injured or even killed due to the attractions not being inspected to ensure safety, word will soon get out that their circus is an unsafe place to be, and they may find themselves unable to attract a crowd.
If the circus is seriously understaffed or needing to deal with governmental officials doing safety inspections, permits, or unusual circumstances setting up the circus may take as many as 1d4+1 days to straighten everything out.
Tearing down the circus can go a lot quicker. In order to avoid unhappy mobs, or if simply in a hurry to get to their next destination, teardown can take as little as 6 hours. The drawback of doin so is that things are hastily put away, and may not be as easily found the next time around. Furthermore, mechanical items may end up getting jammed, wires may tangle, and things may get rip, torn, or broken in the process of being hastily put away or taken out the next time. If the circus tears down quicker, it will take the crew 3d4+2 more hours than usual in order to get it set up the nest time.

Battles within the circus venue

Battles within a more elaborate circus venue can come from literally anywhere, even the most unusual places. There are lots of tents, booths, rides, and hidden passages galore within the carnival grounds. For instance, if there’s a fight going on in the Big Top, the participants would have to worry about those they couldn’t see helping their enemies or hindering them from underneath the bleachers, the trained animals, above them from the high-wire/ trapeze artist vantage points, and even the tent itself as it could be rigged to collapse with a single rope cut. Additionally, if a real fight is going on during an actual circus performance the audience may get involved by pelting the participants with food, thus distracting them.
In certain areas those fighting will need to watch out for moving objects, shifting footing, and/ or breakable backgrounds. Case in point:

Unless someone is used to fighting near such places, it can cause them problems. Furthermore, participants fighting may wish to be careful because they may not wish to damage certain items or the place where they’re fighting, as it might attract unwanted attention.

Sound in a circus

Circuses are often very noisy places. There are the food vendors hawking their vittles, as well as the rides themselves often have their own music. The Big Top is another source of noise, complete with people playing musical instruments or a fancy mechanical music box, animal performers, the Ringmaster, and clapping, whistling, and laughing audiences. There may be a monkey handler with a grinder organ. In modern day, there are often bands playing at carnivals, which are a spiritual successor to the circus. Anyone trying to hear something specific will more likely than not have a difficult time doing so. People who are not used to the level of noise may have a difficult time hearing anything other than the cacophony.

Circus games and rides need not be elaborate. In fact, the simpler the better, not only to attract more folks to play them, but also so that those who play them don’t think they’re being cheated. But the games are insidious in that just because they’re reasonably easy to play, doesn’t necessarily mean they’re easy to win. Most of the games take a steady hand, a keen eye, and a bit of luck to pull off successfully. Some are rigged such that they’re more or less impossible to win. Look at modern games such as “bottle ring toss,” “shoot the ducks,” “dunk the performer” and “bingo” for ideas.
When designing the carnival games, don’t forget the prizes. These can be as simple or as elaborate as you like them to be.

A discussion on carnival food 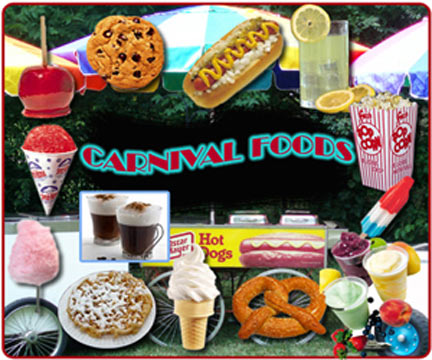 A wide variety of unhealthy food is sold at the carnival. Some of the ideas, like some form of sausages, maybe some sort of grilled local bird and whatever the common alcoholic beverage – whether it is beer or ale – have been around forever. Sometimes they might have an offering of local fruits or vegetables, perhaps baked into a pie, or maybe even grilled. Some staples of modern day circuses didn’t see introduction until much later – thing like popcorn, soda (pop), and cotton candy. When deciding what’s available at the circus, think of things that are easy to make in an open environment, won’t go bad easily, are transportable, and most of all, add to the fun of visiting the circus.

With all these ways to run a circus in your game, you need never run another boring circus again.