I had the fortunate opportunity to visit with the gracious Lise Keeney at the Shapeways booth at Gen_Con this summer. The booth was near the miniature painting competition, and the group paint & take tables that was ongoing. There were several artists at the booth displaying their Shapeways creations, along with a few samples of miniatures that had been painted by talented artist while at Gen_Con. It was inspiring & eye-opening to see such talent on display that can be created for anyone. If you haven’t been to the Shapeways website, then be prepared to spend hours diving into the spectacular three dimensional digitally designed art objects that can be created for you & shipped to your home in a matter of a few key strokes. And then after you find something, you have to decide on what type of material you would like to see it made.

On the website, you can see several game items that can be created for you such as dice, miniatures (Shapeways powers the Hero Forge miniature line), tokens, and terrain.  The 3D objects that I saw at Gen Con were made with several different types of materials. And there are even more materials that I found out about after Gen Con. It is incredible what can be done. Truly Remarkable!

You have objects made with Metal (platinum, gold, sterling silver, brass, bronze, steel, aluminum), Precious Metal Plated, Porcelain ceramic, Plastic (strong & flexible, acrylic, frosted, elasto, metallic), PLA, High Definition Acrylate, Castable Wax, and even Full Color Sandstone. And there is also an upcoming HP Jet Fusion material being tested. Each material used has a different creation process, and you can learn about that in the video at the end of this article. The different materials have different price points, so for example the Thorn Dice set designed by Chuck Stover can be cast with different finishes of steel for approx. $99 or plastic for $43. While my favorite at the show was a Large Labyrinth d6 (also by Chuck Stover) that can be cast in Raw Silver for a mere $488 and steel for $58, or printed as plastic for $16. 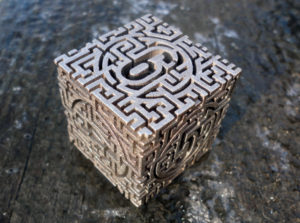 There were even articulated objects that can be manufactured as pieces that can be assembled so that the piece moves. While others move when held, I saw a few examples at the Shapeways booth that were mesmerizing as I held them in my hands. Besides the game pieces, miniatures and dice, there is so much more that can be created such as jewelry, desk toys, and different replacement parts. As Shapeways marketplace expands with more designers and emerging technology, they can offer even more to us.

Here are some photos that I took at Gen_Con at the Shapeways booth. The art is absolutely stunning. 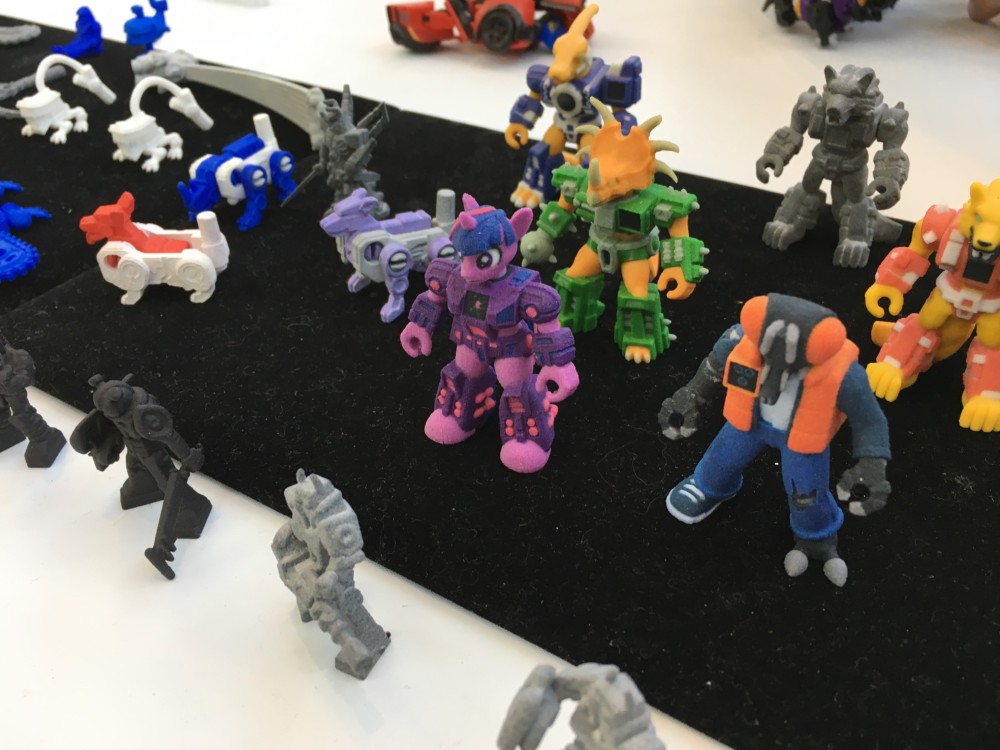 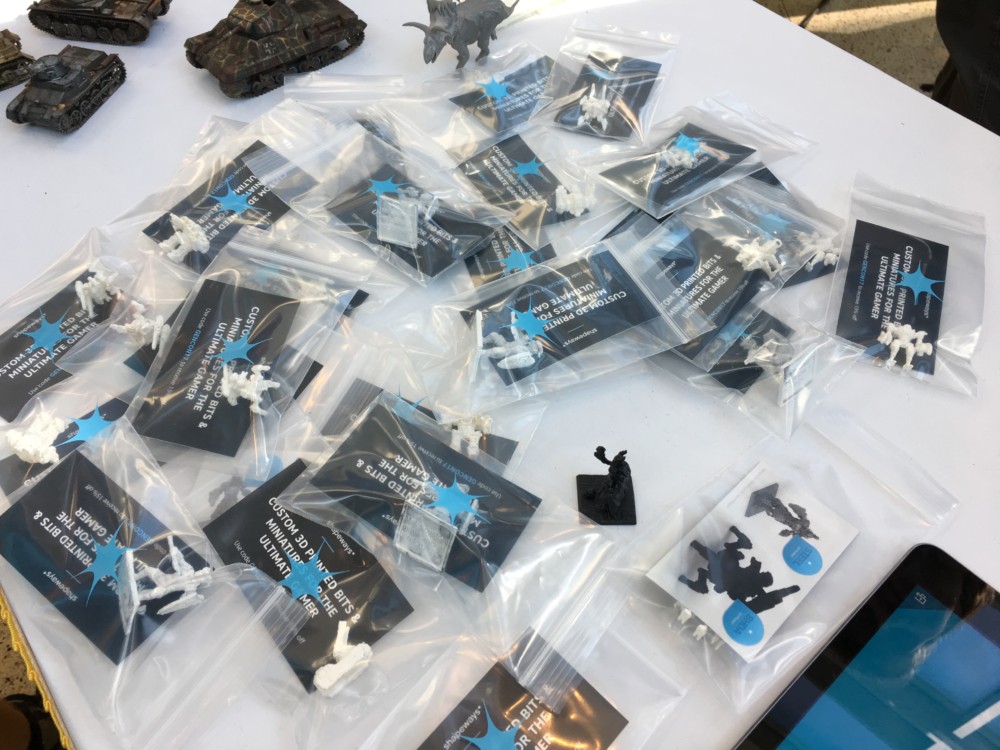 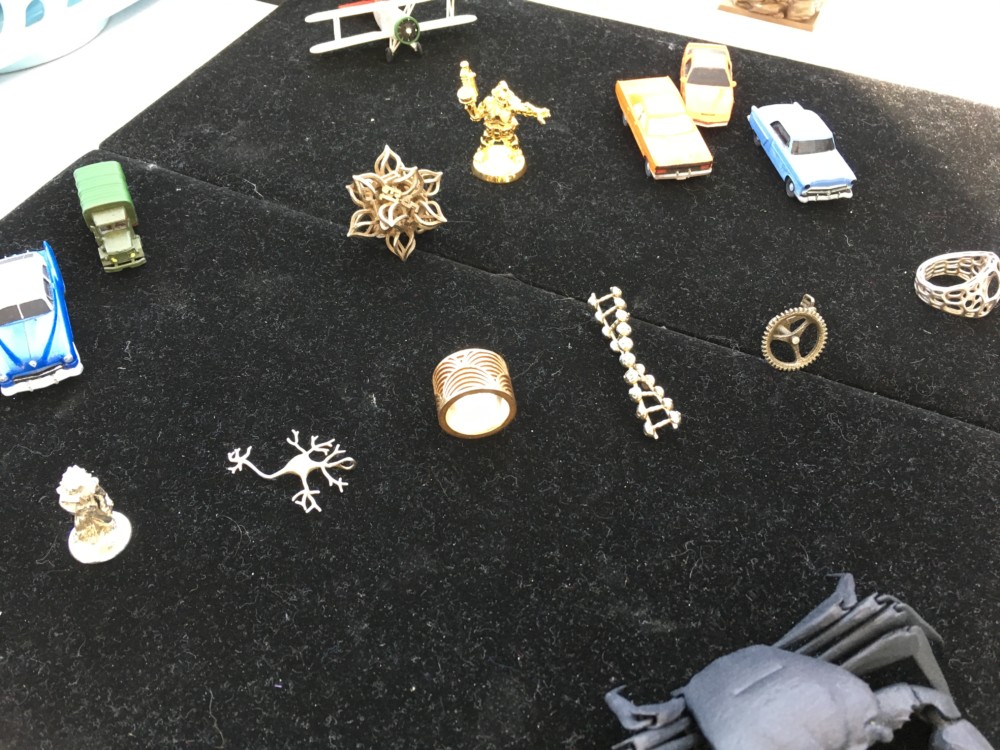 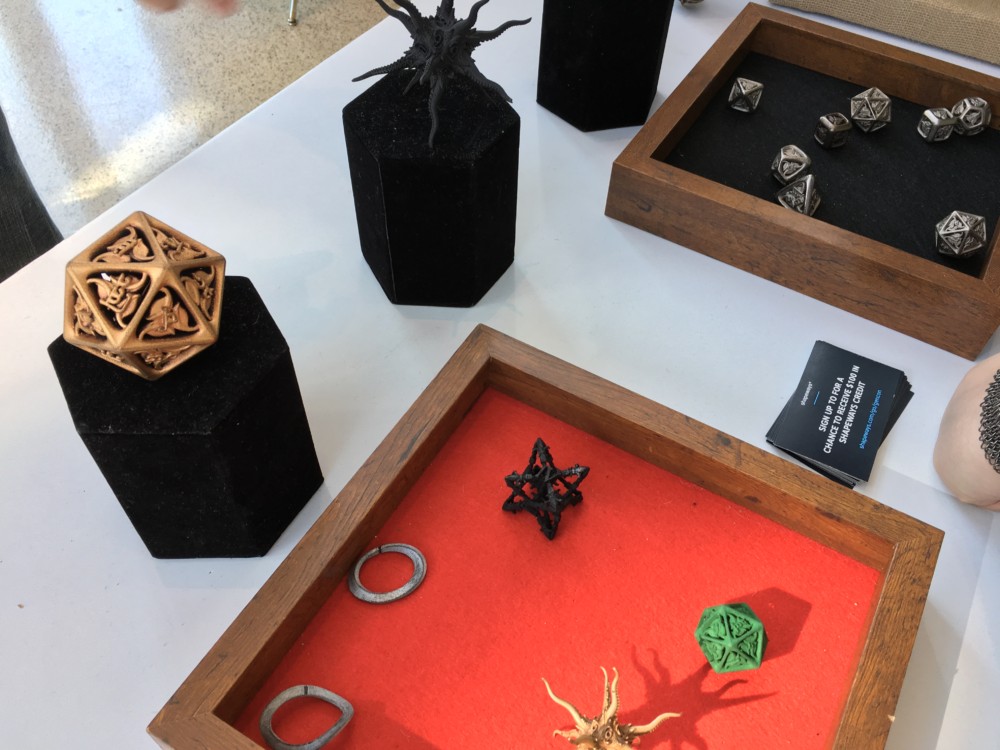 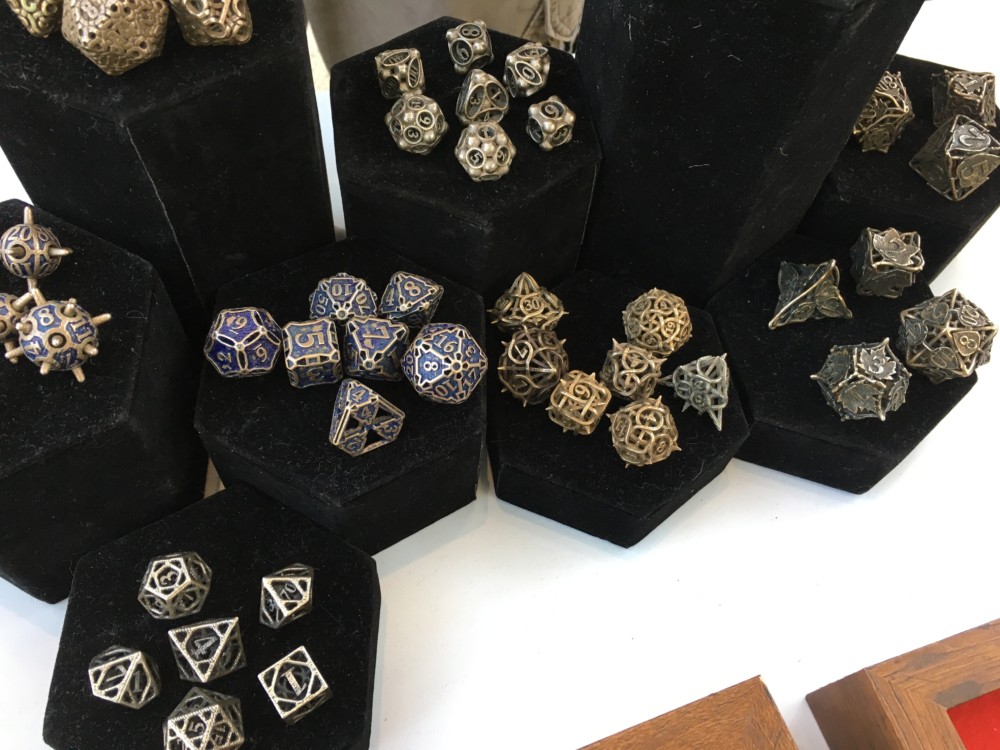 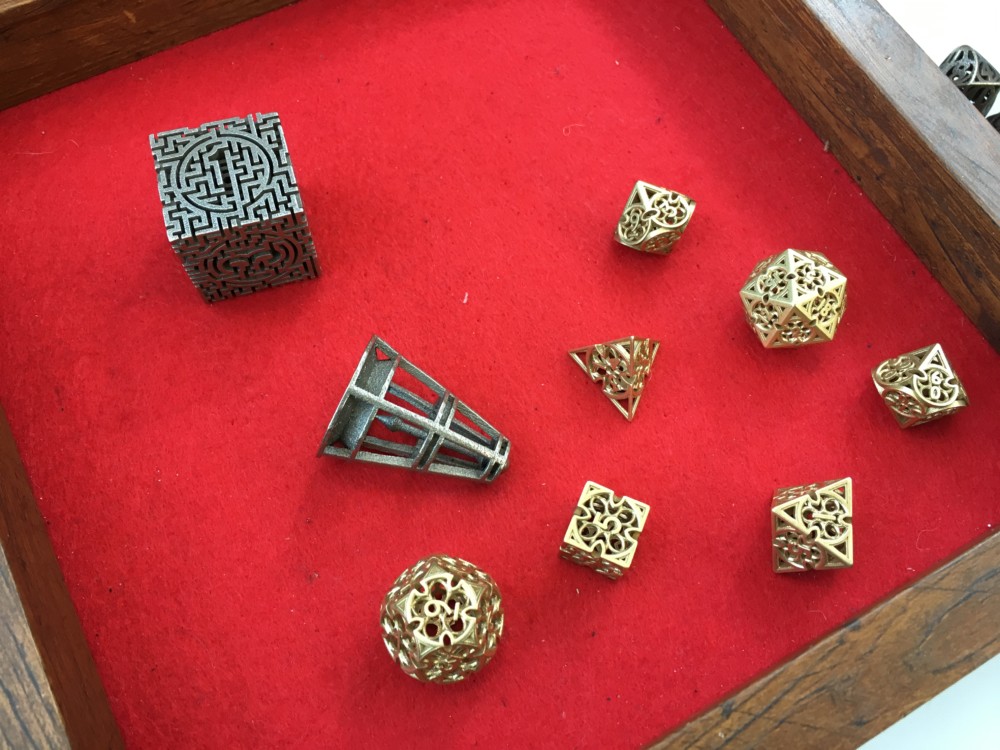 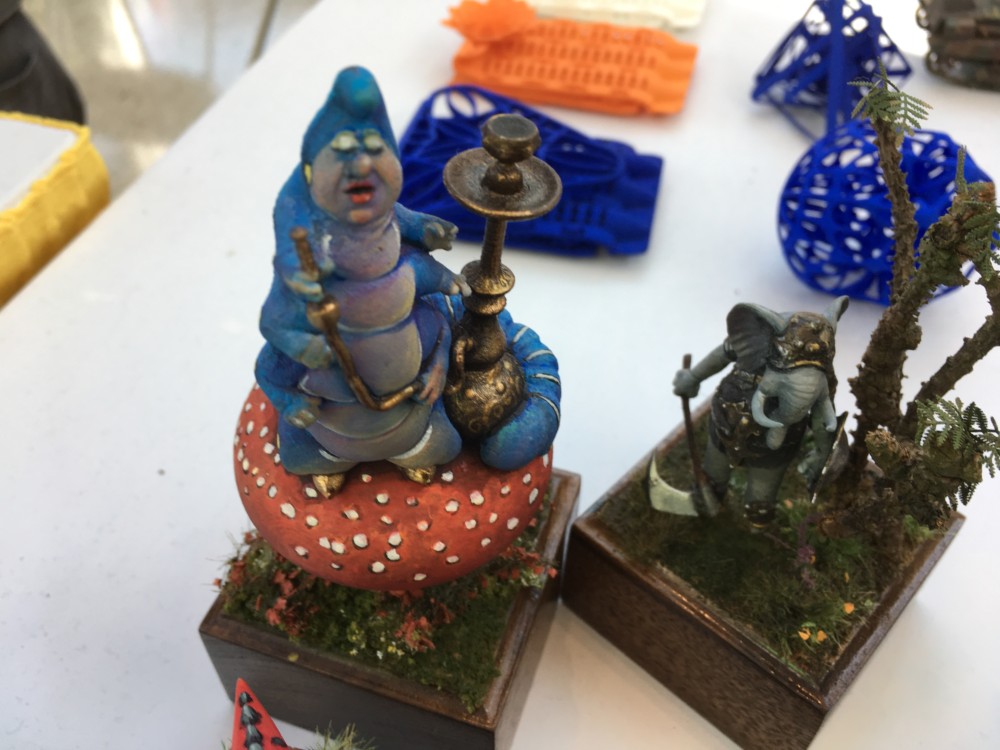 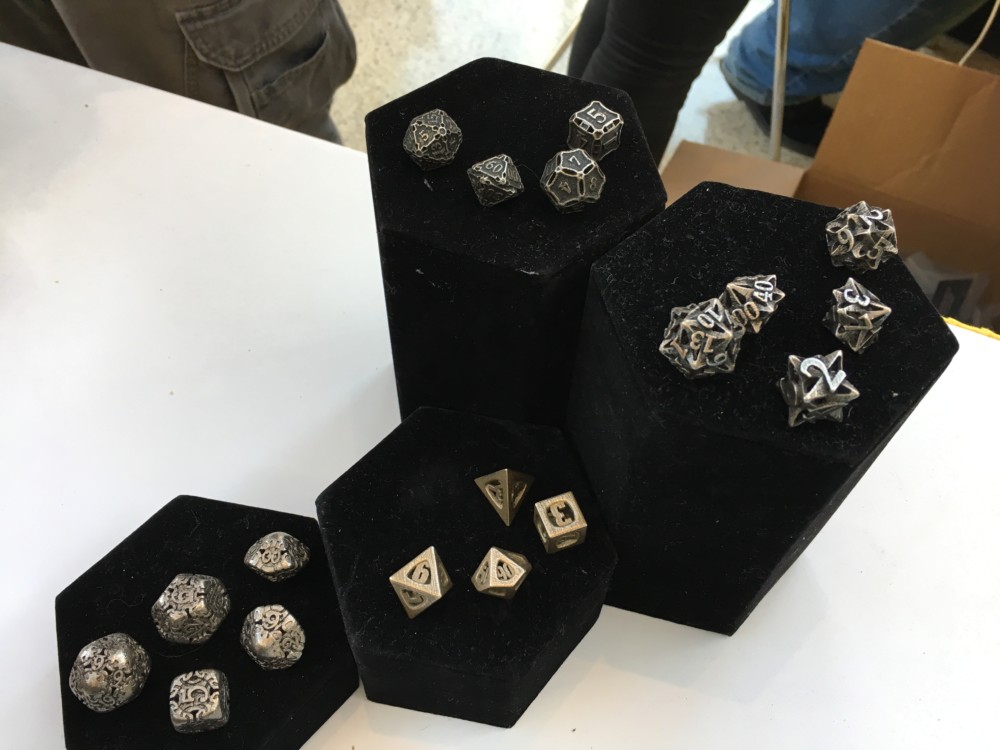 And if you want to know how the 3D printing process works, here is a video that Shapeways put together:

Shapeways is a creative community of makers, designers, and entrepreneurs using digital manufacturing (3D printing) to bring their ideas to the physical world. Designers can use Shapeways to manufacture products with complex designs in over 58 different high-quality materials and finishes—enabling people to expand their limits as designers and makers.

The Shapeways Marketplace allows our creative community to explore entrepreneurship and inspire others to do the same. It’s also a treasure trove for discerning shoppers that value supporting independent designers. Come explore the whole new world of creativity enabled by the digital manufacturing era. Shaping the future in infinite ways. Or as we like to say around here, Shapeways.

Shapeways was founded in 2007. Headquartered in New York, Shapeways also has factories and offices in Eindhoven, NL; Queens, NY; and Seattle, WA.

Van Helsing and Anti-Stories in Games