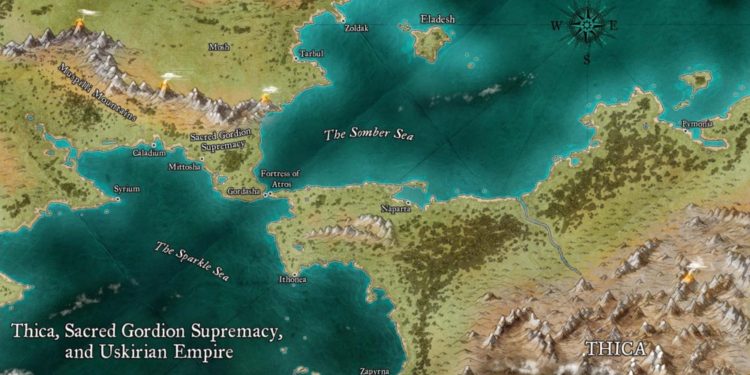 In many games Orcs are the faceless enemy, the hordes of evil that your heroes must smite in order to stop the big bad.

Below are three different options to make Orcs more interesting in your games.

AMFC (All My Fantasy Children podcast)

– All My Fantasy Children podcast is where Aaron and Jeff take listener prompts and create fantasy characters in an interactive world.

-What they’re like
Orks home world was destroyed, but many fled in a city sized space station. They are seeking a new home.
The Orks evolved from sea creatures, gilled humanoids with lower jaw tusks, the Orks have a semi aquatic civilisation.

While they have higher tech than most fantasy civilisations, some of it was damaged, and most of it is aimed at underwater habitat. This can be a catalyst for a campaign world to be more interactive with aquatic creatures and resources.

A good sci fi parallel is Star Trek Voyager or Stargate Universe. They need to survive and and ensure the survival of their species, but they’ve met other intelligent species, they don’t have to fight everyone. The Orks have a strong sense of community.

-How they interact with others
On the planet they want to trade and interact with other species on the worlds they land on, in order to gain equipment or lore to enable them to contact other Ork ships/stations out there in the universe.

-Effect on standard D&D fantasy world
They are not allies with Goblins raiding Human nations caravans. They may trade with Goblins and Humans for lore or resources however. These are intelligent people with a goal and culture, not barbaric destroyers.

Example encounters –
– Orks are trying to negotiate a peace treaty between Dwarves and Goblins because they need minerals from the caves for their cities machinery.
– Orks approach Humans, offering better ship building techniques in return for dealing with these strange creatures (sea trolls) who are attacking their habitats.

All My Fantasy Children – https://soundcloud.com/allmyfantasychildren

– Thrones and Bones is a fantasy trilogy of novels and audiobooks by the skilled weaver of tales, Lou Anders.

While the Uskiri are not called Orcs, they are Orc-like and can fulfill a similar role in fantasy worlds.

-What they’re like –
The Uskiri of Thrones and Bones (Nightborn novel) are empire builders, bringing their culture across the lands by trade and conquering for the betterment of all sentient species. They are lovers of art & music, considering the finer arts the high point of civilsation.

The Uskiri have grey skin and tusks in their lower jaw. They have infantry and cavalry, entertainers and mastery of a hundred different crafts. The Uskiri build functional and beautiful buildings, weapons and ornaments.

-How they interact with others –
The Uskirian Empire is expanding, taking over other lands, they are proactive not reactive. While some nations may be at war with them, others may accept the protection and technology that empire membership brings. The Uskirian Empire has a mighty army, with siege engines and warships.

– Effect on standard D&D fantasy world –
This empire is making things happen. Nations and groups of power are moving in response to the Uskirian Empire. Some traditional enemies may truce to ally against the Uskiri, while others may migrate to a new region to get out of the way. The Uskiri can be seen as saviors, culling ravaging monsters and bringing well patrolled roads and cities to their lands.

5E Notes
– replace Aggressive with Tactican – Uskiri get a bonus action once per combat to out manuever opponents.
– replace Darkvision with Crafter – Skilled in crafting one thing, eg Jewellery, Painting, Woodwork.

Example encounters
– Uskiri traders start dealing with merchant guilds in town, offering a vast array of new items in return for additional caravan guards in this frontier.
– Uskirian Empire soldiers offer to take care of the Lizardfolk in the woods, in return for some of the lumber for the mighty Uskirian empire.

– Rikirta is a fantasy world setting with 17 player species dealing with eight competing factions of denizens.

-What they’re like
Orks are sailors, buccanears and explorers. Rikirta Orks love being in and on the sea, and all their traditional tales involve the ocean. They use rapiers and muskets, though duels are fought with tridents.

The Orks have stepped pyramids as family homes and forts, and slopped pyramids for communual tombs. Duty to nation and deity is an important facet for Ork life. Public baths are common meeting places for business deals or reunion parties.

-How they interact with others
Orks are members of the League of Free States, an alliance of theocracy nations with laws against slavery and necromancy. The Orks are not conquerers but explorers and builders. Since they are not naturally aggressive and love the coast, they can serve as intermediates between Humans and aquatic species like Merfolk or Lizardfolk.

-Effect on standard D&D fantasy world.
The Orks are a civilised species, trading and allying with anyone who is willing to interact peacefully. They are willing to defend their lands, and their navy is competant, it has to be in a standard fantasy world. Orks can have their own nations or be a standard member of a bunch of nations, just like Humans.

-5E Notes
– replace Aggression with Skeptical : +1 to Insight/Saving throws vs illusions and lies.

-Dungeon World Notes
Choose one of these –
• Night vision 60ft.
• Extraordinary sense of smell.
• Skeptical : +1 to Defy Danger vs illusions and lies.

Example encounters
– Ork sailors hire some extra guards for a long ship journey that stops in six coastal cities. Heroes can go along and have a small quest in each place and some fun on the sea along the way.
– A communual Ork crypt pyramid has been despoiled but their are no tracks. Heroes are hired as investigators to track down what happened and retrieve what was taken.