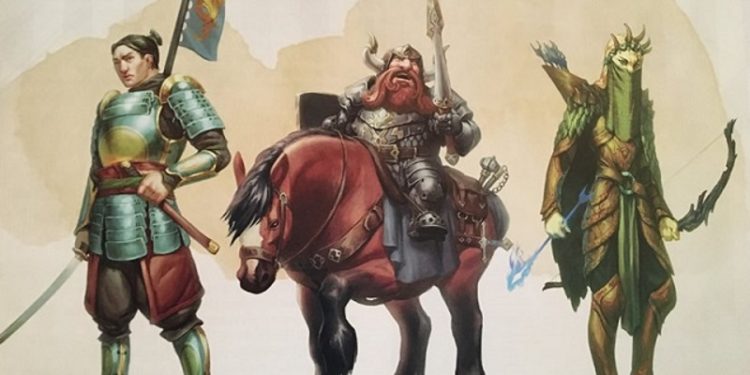 The next piece of Xanathar’s Guide to Everything is… more subclasses. Let’s be real, there are 53 pages of subclasses in this book, we’re going to be doing this for a bit. Today I’ll be talking about clerics, druids, and fighters, with seven new subclasses between them.

The three new distinguishing features of clerics are pretty great – the temple where you completed your novitiate, a keepsake that is pretty much a class-specific trinket, and a dark secret that tests the cleric’s faith. It’s possible that I’m just reading these more charitably, but these don’t point players toward obnoxious behavior nearly as much as the barbarian’s superstitions do. Also, a DM that doesn’t have the keepsake eventually unlock something special – magical powers, access to a high priest’s tomb, whatever – is leaving money on the table.

Mechanically, this domain has changed little if at all from its original UA presentation. Thinking back… I was no great fan of it then, and I have the same problems with it now.

Overall, I think the Forge Domain is a mix of fine, functional ideas and big wastes of time. It wouldn’t take much to rewrite it into something I did like. As it happens, I’ve written and sold a similarly-themed domain, and once it is published, I’ll share it here. Not that I would let this bias me in any way. Er… yeah. I’m sure you all believe that. Right?

If it weren’t for some serious concerns about the effects of the final feature, I would be basically fine with this domain. It’s a little strange that it’s one of the more healing-focused domains. Like I said, though, I have concerns about how Keeper of Souls tilts late-game play to make PCs well-nigh untouchable. Looking ahead to the druid Circles, I think we’re seeing a metagame shift toward strong healing output, across multiple classes. I’ll be looking for more signs of this as I continue through XGTE. This may be a counterbalance to the increased potency-per-CR of creatures presented in Volo’s Guide to Monsters.

Okay, let’s shift the shape of our text to talk about druid subclasses. Unlike the other classes I’ve covered so far, I’ve gotten to see the UA versions of these two Circles in play at the table, although only at 2nd and 3rd level. I won’t be going point for point with changes from UA, but I was generally impressed with what I saw out of them. This section also has optional rules for Learning Beast Shapes. The character backstory elements are great here; the Mentors are especially mysterious and evocative. I would consider buying a book that was nothing but expanding these backstory seeds into d20 or d100 tables. (Or I’d try to write one myself, daunting though that is.)

These are the fey-empowered druids. It calls to mind the fey interaction features that show up in earlier-edition druids – in vestigial form now, in the Circle of the Land’s Nature’s Ward feature and the fey-conjuring spells. Since it came up in conversation a couple of weeks ago, I also think that the largely unprecedented appearance of charm person on the druid spell list is best justified as a nod to fey connections.

I am a definite fan of the Circle of Dreams. It’s an amazing healing-and-utility subclass, stacked onto a healing-and-control class. It doesn’t have some of the breadth and depth of spellcasting that the Circle of the Land does. Balm of the Summer Court often saves you more spell slot levels than Natural Recovery replaces, at least on days that you’re doing a lot of fighting and worrying about the full depth of your spellcasting. I’ve never played a druid as a PC before, and this one has a little more draw for me than others.

Circle of the Shepherd

Radagast the Brown is probably my favorite fictional model for this subclass’s core themes. On the other hand, I’ve never been wild about summoners in tabletop gameplay, and that’s a huge part of the Shepherd. It’s an action economy and game slowdown problem. I haven’t seen it yet in 5e – the Shepherd in our group is not yet high enough level – so maybe I’ll change my mind.

I am, to put it gently, not thrilled with this class. Its first feature is just crazy good, while its other three features are all about a playstyle that I don’t think works all that great at the table. I don’t mean that it isn’t effective – I mean that it slows down play by enormously expanding one player’s turn. Also, the whole dynamic of conjure woodland beings and trying to get your DM to fuck up and decide that you summoned a bazillion pixies rather than… literally anything else is just not a great situation. (I’m way more into the three new summons in XGTE, but we’ll get to that… quite some time from now.) In short, I think this subclass could be great with some retooling of existing conjure options and creature stats, but being no other than as it is, I do not like it. (But, to the Shepherd druid who is a fellow PC, I still think you’re awesome. Wemics, y’all.)

The section on druids continues into light-touch rules for learning beast shapes. Their solution is a page and a half of beasts by terrain type and CR and “whatever feels reasonable.” I would personally enjoy a system that involved more sense of searching and adding things to your personal repertoire. But then I would also be here for a wider variety of beasts between CR 3 and 6. This is guidance, not a rule as such.

Moving on into fighters, the flavor text is a series of odd assertions about the Themeless Class. The tables for further characterization – Heraldic Sign, Instructor, and Signature Style – don’t really fire my imagination with ways to tell stories. You’d think it would be impossible for the list of Instructor NPCs to lack story hooks, but here we are. Fortunately, the new Archetypes have a lot more going on.

Since it doesn’t look like I’ll ever get the archer-paladin that I want, I’ll be happy with the Arcane Archer and writing my own additional Arcane Shot options and variants. If you’re looking for a collection of magic bows, I’m here for you.

I want to like this a little more than I do. Mainly, it feels like Arcane Shots should get either get more common or get better sometime before 15th and 18th level. Most of your shots and most of combat rounds aren’t expressing anything about being an Arcane Archer that is different from the core of the fighter class. Curving Shot is kind of their best bet for that on a once-per-round basis. I guess I’m looking for something more cantrip-scale as an add-on or alternative to archery. Maybe shooting fire bolts and chill touches from the bow?

Nothing has a longer history of being laughably overpowered in D&D than the cavalier. The flavor text touches on how they’ve expanded the concept to support the social connections and obligations of a cavalier. Just to be clear, we’re talking about heavily armored defenders, not Prince Rupert of the Rhine and others like him in the English Civil War. (Many thanks to Mike Duncan for teaching me about the latter.)

This is a tanking subclass for people who like to tank. It behaves like a gravity well on the map and pulls the enemy’s battle plan to shreds. It’s hard to say whether or not it’s too powerful. Before 10th level, it probably doesn’t match up well against the Battle Master in adventuring days with more than one short rest. After 10th level, more passive abilities come online for the Cavalier, but the action economy starts treading on its own toes a bit. There’s nothing in any other fighter subclass that honestly competes with the show-stopping extra reactions of Vigilant Defender.

Since I’ve been writing about 1e and 3e samurai a good bit lately, I’ll save myself some time and just link it. The key features of this subclass draw heavily on the kiai shout features, renaming them Fighting Spirit. Even more than the monk, it’s hard to see how to fit this one cleanly into any setting that isn’t explicitly Japanese. On the other hand, you could use these features without a hint of a change to represent a spirited, roaring warrior in any culture – Porthos springs to mind. (Maybe not the Elegant Courtier part…)

The total absence of a feature directly connected to the katana, the wakizashi, or two-weapon fighting is straight-up shocking. I think I’m proud of them. I’m positively inclined toward what goes on here, which surprises me a good bit. Where the cavalier is a defender, the samurai is a striker, and plays in a self-contained way.

Again treating Battle Master as a baseline: well, they don’t keep up on the damage output or on the availability of temporary hit points or on generating advantage until Rapid Strike comes along. Rapid Strike is all right if your team does nothing to help, but stellar if your team builds their tactics around it. Waiting until 15th level to catch up to Battle Master is not at all a mark in its favor. I like the subclass and what it does, but unless you’re really sure that most of the campaign’s run is going to be 15th level and up, just play a Battle Master. (They are super fun and unmistakably written to support samurai concepts.)

Thanks for coming with me for this sprawling article. We’ve covered 13 of 31 subclasses in XGTE so far. Next time, monks and paladins!

TagscavalierclericdruidfighterreviewssamuraisubclassesxanatharXanathar's Guide to Everything
Previous Article