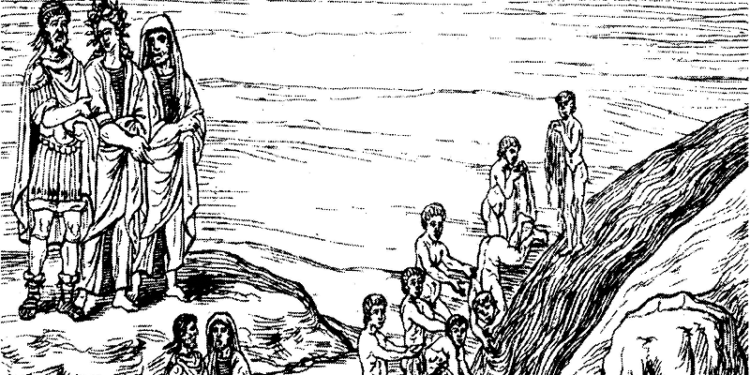 Death in D&D tends to come in two flavors: the salty tang of a total party kill (sometimes called TPK or just a party wipe), and the bittersweet notes of one or several (but not all) fallen comrades. If a party wipe occurs, that’s generally the end of that group of adventurers. If a party member – not the entire party – dies, the party either has the means to resurrect the party member, or doesn’t. As long as the party possesses the ability to resurrect the party member – a set monetary value in items and a spellcaster of sufficient flavor and level – the party member is restored to life. Alternative death and resurrection systems for 5e can add a little spice to this rather stale afterlife.

There are varying degrees of restrictions, but the only chance of failure outside of those restrictions falls into a very small clause which says, “If the creature’s soul is both willing and at liberty to rejoin the body,” Inside this sentence is where the wiggle room and DM flair lives. Within that wiggle room resides an opportunity to implement a resurrection system that is a little less binary, while still fueling the story hooks that “willing and at liberty entails.” However, a little more crunch for those who are looking for such a thing isn’t a bad thing. If you aren’t interested in the crunch, then hopefully the flavor will do it for you. To that end, here is an alternative death and resurrection system for 5e.

First, a little background. I’ve helped run two fairly successful LARPs. In each case, death was a very real risk for the adventurers. Dying wasn’t necessarily a career ending condition, as methods of resurrection existed. However, each death made it less and less likely that resurrection would be successful. Both games had different entities presiding over death – one a literal personification, and the other more of a figure that could speak about the beyond and have some manner of influence. The two methods to track death and resurrection were related to each other, but very different.

The first LARP I will discuss used a bag of multi-colored marbles. White marbles meant you resurrected without consequences, black marbles meant you failed to resurrect, and blue marbles indicated you returned to life with some sort of change occurring – this could be a positive, negative, or neutral change. If you died your final death, people could seek out Death and issue a challenge for the retrieval of their lost friend. If it was successful, the deceased returned to life as if they were a new character, but retained their memories and earthly contacts – a meaningful emotional reward for the player.

This was by no means a guarantee, and it could easily result in the deaths of one or more of the adventurers embarking on this quest. Due to the nature of resurrection, this might be a final death or it might be a “weakening of the soul” – read as adding more black marbles to the bag in place of white marbles. Some variations of this system also included a red marble, indicating you resurrected successfully and remembered everything up until the moment of your death. You typically lost the memory of the last 30 minutes, mostly out of a desire to protect Player vs. Player gameplay, should it arise.

Dust to Dust – created by my better-respected and more-skilled fellow contributor, Brandes Stoddard – used a double-six domino set system in order to govern our resurrections. This was especially convenient as ritualism – one of the Dust to Dust magic systems – used double-six domino sets in order to cast its spells. It allowed us to always have the necessary implements for resurrection handy – something that previous systems sometimes struggled with – and it meshed well thematically. One thing setting this system apart is the transparency of its back-end information. Rather than locking the final death mechanism in a black box out of the player’s sight, we created a tiered death system.

Players wouldn’t die if they fail a draw one time, but instead receive a briefing where the Warden of the Grim Prison – a “jailer of souls type” – is actively seeking to obtain their souls. The more they die in this tier, the worse the situation is for them when they returned to life – sometimes they would have claw marks on them, had open wounds, etc. This is a visual indicator that their soul is not quite as safe as they would otherwise care it to be.The system also has a clearly-defined system for positive and negative flaws from resurrection – complete with non-exhaustive examples to allow appropriate flavoring. The system also takes into account the manner of death and the manner of resurrection, with some methods being harder or less…clean than others. Alchemical resurrection will do in a pinch, but you shouldn’t plan on it being your first option.

While it is not directly related  to the system itself, there are two mechanics in place should the player die. They could return to life as a Returned – essentially an undead let out of the Grim Prison on probation – or the other players could turn them into a homunculus – a sentient-ish flesh golem. In either case, they are at a substantially lower power-level, and have to work to regain a sense of self. It doesn’t change everything about their previous actions, but it’s a major shift for them.

Positive flaws included items like: renewing all expended resources, a one-time use of a magical protective, one-time use of a powerful offensive or defensive maneuver, or the ability to provide additional benefits to others.

Negative flaws would include short-term disabilities such as bleeding out more quickly, becoming allergic to specific materials – rendering you incapacitated if you interacted with them, magic or alchemy being less effective when used upon you, and so on.

There could also be storyline impacting flaws, depending upon the particulars of death and resurrection.

As a tabletop game, D&D has the advantage of the DM being able to prepare for the exact session in question, so the availability of marbles, cards, or dominoes is much less of an issue than at a LARP, where might be any number of reasons why don’t have those available on your person. We will discuss two possible paths to implementing an alternative death and resurrection for 5e: cards and dice.

We’ll start with dice, since it’s a safe bet everyone playing D&D has access to dice. The good thing about dice is you can manipulate the resultant roles as needed to fit the numerology for you campaign. While I will suggest things at certain numeric values, feel free to change them as befitting your campaign. If the number five holds significance – five gods, five kingdoms, five eras of history, five great archwizards, etc. – then move the suggested flaws to numbers ending in five, or have it be all the 50’s – whatever makes sense for your game. If you would like to have the means of resurrection be more impactful, you can add additional flaws as you see fit.

The first time a player dies and returns to life, they would roll on this table:

The second time a player dies returns to life, they would roll on this table:

A good flaw might be gaining inspiration, being restored to life with an additional power – being able to cast message at-will, for example. It could also manifest as a blessing by a god or patron – granting you the effects of guidance for the next day or so. Maybe you receive a vision or piece of prophecy meant for someone else.

Following on those concepts, a bad flaw could be loss of several hit die that recover slowly over several days. Maybe you return to life with some number of exhaustion levels. You might lose  a skill proficiency for a few days. Thing could go very badly, and you could receive a curse from a deity or patron – causing you to be under a bane effect for a period of time. Again, not an exhaustive list. These are just a few quick and easy ideas to implement. Flavor it accordingly. If it’s a Path of the Totem barbarian, giving her some appropriate animal aspects as a good flaw. If it’s a bad flaw, give her horrific animal aspects.

Restoring a soul experiencing a soul complication can be a tricky endeavor. In some of the cases, it might be a conversation with the soul in order to convince it to rejoin the body – in the event of encountering a loved one or a foe. Perhaps it is a bargain you strike with the soul to assist it. In some cases, you might need to bargain with a deity or patron instead of the soul itself. It might even fall to the group to retrieve the soul from the afterlife – in true mythological fashion.

This isn’t an exhaustive list of complications. Feel free to change, add, or delete any of the options above as makes sense for your campaign. Maybe your campaign centers around reincarnation, and so one of the complications is that the soul undergoes reincarnation into its old body. It goes without saying that there are a lot of options to explore. Importantly, a system like this includes more of the group in the process, keeping the story moving and the table engaged. In theory, at any rate. There also isn’t a guarantee of success, either. Just because you go to save the soul of your friend doesn’t mean it will play out that way.

The second possible system is one Brandes Stoddard used in a previous game that he ran. You draw Tarot cards from a deck  and the entire table interprets the results. The way it works is straightforward enough:

This method resonates with me because of the group dynamic of the experience. Every death is a chance for the players to contextualize the game, setting, and their experience as it applies to a specific character. The players provide feedback in this manner to the DM, allowing the reflection of the story to come to light. It’s the stuff of good storytelling. The DM is still the arbiter of the interpretation, of course.

In my opinion, D&D is at its best when everyone at the table is invested in what’s happening. The more we can remove the natural silos that have occurred over the years, the better. Death has long been one of those silos, and a relatively uninteresting one at that – as written, at any rate. A binary outcome usually isn’t the optimal outcome, as story and emotion tend to live within the nuances and twists along the way.

If you have your own resurrection system that you have, I’d love to hear about it in the comments. Likewise, if you anything here inspires you, and you plan on modifying it for your own uses, I’d love to hear that, too. Of course, if this sort of system isn’t for you, no worries at all. Different strokes for different folks. These are just here if you want them, or to help you find some inspiration.