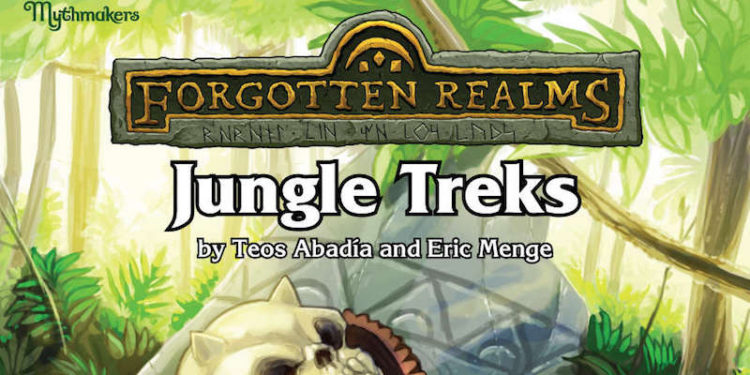 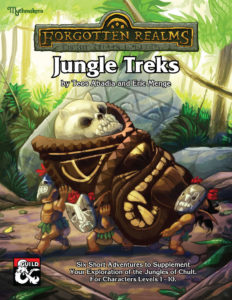 I had the great pleasure of reading through a new offering on DMsGuild.com. It is written by Teos Abadía & Eric Menge and is six short adventures each of them being able to support player characters Level 1 to 10. Jungle Treks is a great supplement to the Tomb of Annihilation hardcover book that was just released, or you can easily use them in your own home campaign with a wilderness/jungle setting. And at the end of each adventure scenario, there are links to the other Jungle Treks adventures, and you’ll have symmetry to your Tomb of Annihilation campaign.

I think it’s really smart to be able to scale each of these adventures from 1 to 10, so they are super versatile and gives the DM the ability to drop them into their campaign at any point with ease. They can be played through fairly quickly and just add to the Tomb of Annihilation adventure.

Here are the 6 different adventures:

Tavern Trouble – With a mysterious curse upon your guide, escaping lizards, and foes who have come to settle debts, your jungle trek gets interesting before you even leave the tavern!

A quick introductory adventure that can be used as you begin your players in a tavern setting. It has a distinct mechanic of catching lizards and fighting a gang in a tavern.

If Looks Could Kill – Crossing paths with a merchant prince’s expedition can be very lucrative. The expedition members’ agendas present interesting choices, as do the dangerous denizens of the swamp.

A great roleplaying opportunity for your characters to meet some new NPCs. It has some choices that allow the adventure to end with several different outcomes. You may gain some friends, or maybe some serious enemies.

Ambush from Above – Grung acrobats? With a team mascot? What is going on here?

A quick adventure that can be injected whenever the adventurers are traveling through the jungle. It could be played in a quick combat scenario, or with the party making good choices; they could come out with some reliable allies for future play-ability.

As the title says, this entry can be used when the party is traveling by river. It gives some ideas that you can employ in river travels, but doesn’t give too much in terms of storytelling. That’s not a bad thing though. The DM may find the urge to add more to this as the conclusion suggests giving the party a vision (one of several available plot hooks from ToH)

Mudslide – It’s been raining for days, and that rumble isn’t a dinosaur! Run for your lives, and watch the creatures in the mud!

This is another terrain induced addition. With torrential rains comes flooding, but in the jungle this also causes mudslides. Reminded me of the movie Romancing the Stone. There is a combat scenario with mud mephits and lots of lost equipment. The characters can be thrown into a river, that can lead into the Mystic River scenario.

The final Jungle Trek leads the party to the Ruins of Mnonga where they can explore, interact (roleplay), and fight. If they are successful, the party could gain a base of operations. I think this is one of my favorite Treks and it is one of the longest to play.  You may be tempted to drop this one in your campaign first, but making it later on in your campaign would allow it to be further in the jungle. That would allow a waypoint where the party can rest and replenish themselves.

This is a great compilation book. I think you will enjoy everything about it, and I highly suggest that if you are a DM, or you have a DM that you really like and want to play some great short adventures, then get this. It will amplify your game. The Beautiful Plumage and If Looks Could Kill are my two favorite parts of this anthology.  Super job, and I look forward to more from Mythmakers. Now to go pull out an old VHS and watch Romancing the Stone. Cheers!

Here are some previews that you can also find on DMs Guild.

Teos Abadía has worked on some of Wizard of the Coast’s most important organized play adventure projects, including The Howling Void, The Artifact, Vault of the Dracolich, Confrontation at Candlekeep, Cloud Giant’s Bargain, the 2016 and 2017 D&D Open, and the Gen Con 2014 Epic adventure Corruption in Kryptgarden. Teos has also written for Kobold Press and is currently authoring the Dwarven Forge series of adventures accompanying their 2017 Kickstarter campaign.

Eric Menge is known to many as the story lead behind the amazing Geoff region in the Living Greyhawk organized play campaign. In addition to authoring countless organized play adventures, he has written for Wizards of the Coast, including co-authoring the award-nominated Menzoberranzan: City of Intrigue. Eric has also written for Legend of the Five Rings by AEG and Raging Swan Press. Through his studio Mythmakers, Eric is currently creating the graphic novel Snow by Night and dreams of muskets, alchemy, and snow in the moonlight.