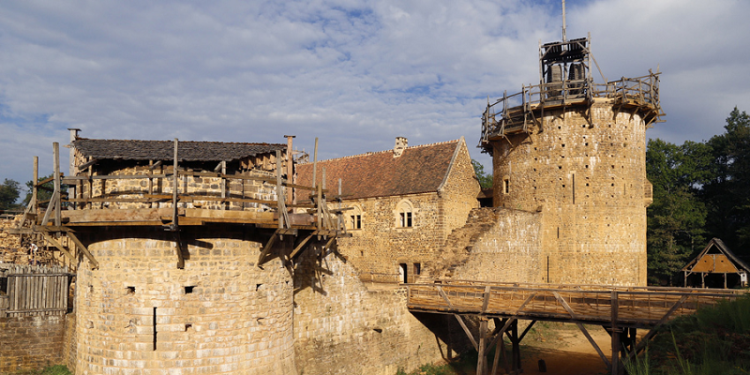 Do malevolent innkeepers prey upon your party, gouging you for your last coin to simply have a place to sleep? *image of a sad person fumbling with a pouch* Are you tired of your fighter being called a murderhobo? *children and dogs chase a person in platemail down an alley, ultimately cornering him and causing him to cower* Do you find your bard crying into your tunic after being called ruffian, vagabond, or ne’er-do-well? *a person sobs uncontrollably on someone else’s shoulders*  If you answer yes to any of these questions, then look no further for an answer to your problems. Don’t worry, you don’t have to do anything as drastic as attempt to be a better person. Just follow these easy step for modular base construction in D&D 5e, and your troubles will melt away.

(Man, now I want to see a whole series of bad D&D infomercials.)

While many of my esteemed colleagues are true domain management professionals – with doctoral-level dissertations on the subject – I am but a humble novice. I am not possessed of a deep-abiding desire to engage in the minutiae of day-to-day governance. However, I do enjoy a more macro-level of domain management. This almost certainly stems from my love of RTS games – particularly Command & Conquer: Generals, Battle for Middle-Earth, and Realm Wars. Even though I love 4X games like Civilizations, RTS games strike a balance between action, creation, and management that is very appealing to me. Most of the decision-making in an RTS is clearly outlined, with obvious correlations between choice and outcome.

This results in a more constrained exploration experience, but the trade-off is an emphasis on resolution speed and action. With this in mind, I decided to take what I liked about RTS and port over some of the concepts to D&D.

A Tale of Two Domains

Before getting into the system and the variations, it’s important to discuss the two different games in which the systems are seeing use. I run two D&D 5e games – one of them is a weekly online-only game through Roll20, and the other is a monthly in-person game. I’ll keep it brief, but understanding the differences between the games is important to understanding the differences in modular base construction implementation. If people want to talk more about the campaigns, I’m totally down – I just understand “tell me about your character/campaign” isn’t for everyone. It’s just important for this context.

The online game is set in Al-Qadim, and follows the al-Marduun family as they attempt to restore their family’s honor and estate after the family fell into ruin due to the collapse of their shipping business. The game features a lot of player-created content, utilizing a connection map to define the NPCs, locations, and some of the initial connections around which the story focuses. While standard adventuring occurs regularly,  the cultivation of these relationships, political maneuvering, and continued investment in the main city and family state are all things I consider to be core gameplay. Taxation and tithe concerns are a compelling and driving force for the narrative, in this group.  Hosting a dinner party at the family estate can be the climax of a chapter just as easily as a boss fight.

The in-person game is a decidedly different affair. The game takes place in the Planescape setting, and follows the players as they find themselves awakening from stasis on the Granite Sledge, a giant stone spaceship belonging to Spacesea giants. However, things have gone awry – the giants are dead, the ship has suffered heavy damage, and large statues to the Egyptian gods Ptah and Sekhmet reside upon the bridge. The players have thus far spent their time undertaking repair missions to repair the ship enough to allow them to begin seeking out why they are here, what happened to the giants who brought them to the ship, and where they go from here.

The players are a mix of prime world and planar residents – with more of the characters playing four-legged races than two-legged races. At this stage, the ship is a place to stage adventures from and return to post-adventure. There isn’t an expectation that action – combat, diplomacy, intrigue, whatever – occur on the ship itself. That might become the case, but it is not at this stage.

As you can see, any base construction that occurs needs to meet very different goals. It would be a disservice to the players to treat them as the same monolithic entity. However, that doesn’t mean using the same framework is a problem. In this case, the framework for modular base construction is built around the D&D 5e magic item system. Each building or building upgrade should more or less correspond with a particular band of magic item rarity. The buildings and upgrades should provide a benefit – active, passive, or both – to either a specific person or to the entire party.

The breadth and strength of the benefits need to be taken into account when assigning cost or difficulty, as well. A weaker benefit that applies to the entire party might be better than a strong benefit that applies to only a single player. Getting a sense of the strength of the benefits can be difficult, but using the magic items as a guidepost helps provide some comparative context.

You could easily add additional tiers of upgrades, increasing the die size, or expanding the applicable skills. The entrance hall costs 75,000g, applies to anyone sworn to the house. Itserves the dual thematic purpose of social prestige/intimidation and potential chandelier-swinging swashbuckling. Spreading the price across just the players, it amounts to 12,500gp per person – placing it firmly in the very rare magic item category. While something like cloak of arachnida might be stronger and more flexible for a single individual, the strength compares favorably when taken as a whole. In my opinion, at any rate.

This workshop allows you to double the initial rate at which you create items or perform research. Additionally, whenever you make an ability, skill, or tools check  applying to research or item creation within the workshop, you may do so with advantage.

Upgrade Benefit: This upgrade allows you to triple the initial rate at which you create items or perform research. Additionally, whenever you make an ability, skill, or tools check  applying to research or item creation within the workshop, you may roll a 1d4 and add the result to the check.

One of the characters focuses on becoming the premiere artisan in the City of Delights market. This is critical to his pursuits. The other players perform spell research frequently, and would benefit from the workshop – though not to the same degree. Fundamentally, this structure lets you spend money to then spend money and resources more easily in the future. For the cost of 5,000gp per person, this is a fairy reasonable expenditure.

Certainly, the workshop is more obviously applicable to life outside the family estate. However, it still focuses on activities that occur during downtime and on the estate proper. Sure, spells and goods created see use elsewhere, but that’s secondary. The creation process is going to be one of the signature moments of the entire process. If you are going to highlight something, it should be fun and memorable.

An Example from the Granite Sledge

The Planescape game is an altogether different ball of wax. Everything the players opt to build and create goes towards making them more efficient adventurers and explorers. The Granite Sledge is simply a waypoint between their zany exploits. Rather than improve their lives while they are aboard the ship, everything supports their off-ship pursuits. The crew doesn’t actually spend money on these upgrades. Instead, they undergo grueling tasks in order to get the ship in working order. That said, I’ll assign a cost anyway – it will be high, as this is a major upgrade. Let’s take a look at the life support system upgrade.

This system does a lot, no question. The mechanics all revolve around spending a long rest in the chamber, true. However, you go out into the world to use the benefits. The campaign thus far assumes the crew comes back to the ship after missions. It also assumes the crew starts every mission fresh from the ship. This acts as something of an episodic reset, provided they can make it back to the ship. It allows crew members to become a little more durable. Not to mention it is always nice not be punished as much for rolling hit points poorly. Since the party changes constantly, this also provides a mechanism to allow for slightly better self-sustain through hit die expenditure. The party can’t count on healing being available, after all.

These are just examples, of course. What works for my groups isn’t necessarily going to work for another group. However, the framework is easily modular enough to fit most play styles.  You just have to be willing to define the benefits of any upgrades the players might create. In the Planescape game, I have defined most of the systems the party can upgrade. There is a “support systems” sub-system with module expansion to allow players freedom to create, however. The Al-Qadim game is much more open-ended. They should tell me what they want their house to look like, after all.

Thus far, the reaction to this system is positive from most of my players. The feedback centers around their appreciation for clear progression and benefits. The downsides are obviously the upfront work requirement, ensuring the price is appealing, and balancing around the benefits. My sample size isn’t excessive, but the feedback has been from 20-odd people or so. If you are in the market for some base construction, consider giving this a shot.

As always, if you have some easy domain-management rules you use in your own game, I’d love to hear them!