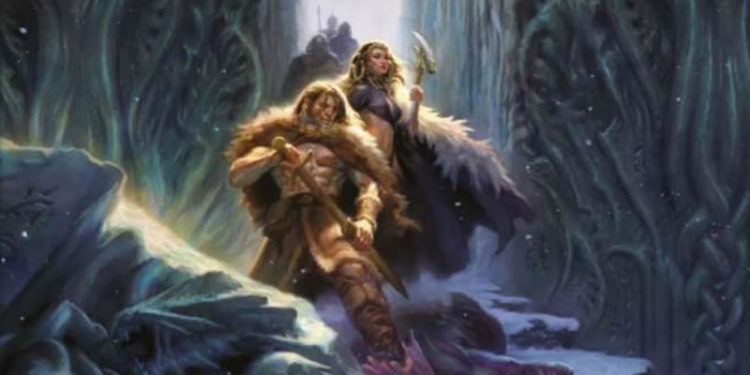 This week we have a guest post from Emmanuel Tragakis (aka Manos Ti). He’s an active, long time member of the Tribality community, but this is his first guest post. 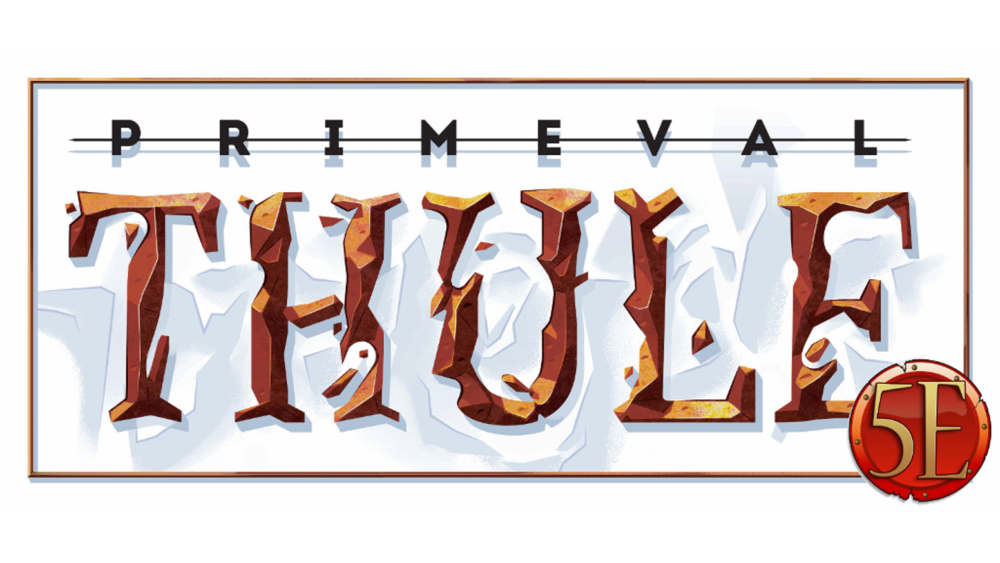 Tired of the Forgotten Realms? In any way you want to try something new but not keen on homebrewing? Or even better, you’re interested in homebrewing, but you want to check out some other settings to get ideas from?

Look no further. Your friendly neighbourhood Tribe is here in order to look for 3P (that is Third Party, i.e. not Wizards of the Coast) Campaign Settings (CS) for D&D 5e!

Our first stop in this journey between worlds of intrigue, magic and danger is probably the first chronologically Third Party Campaign Source in D&D 5e, Primeval Thule.

What is a Primeval Thule?

Take the Legend of Conan put it in a razor bladed mixer with the Cthulhu Mythos add more Swords and Sorcery and there you go, Primeval Thule. It is a place of dark and gritty adventures, jungles, dark cults and madness. It is also the product of the joint efforts of Baker, Noonan and Schubert of Sasquatch Game Studio and it was first launched for D&D 4e, 13th Age and Pathfinder, after a much successful Kickstarter campaign. Immediately after the OGL for D&D 5e was out, a new KS campaign made Thule 5e happen.

In game terms, Primeval Thule is a continent situated on the northern hemisphere in an alternate Earth (which is also called Earth by the way). It is a lush place, full of jungles, dense forests, rich grasslands and swamps. Small settlements and some cities harbor the civilized people, at least the ones that can qualify as such. Actually, Thule follows the same “points of light” logic as D&D 4e’s Nentir Vale.

Primeval Thule got its name by the untamed nature and its savage wilderness. All kinds of dangers lurk there, from savage creatures to rival tribes and alien monsters. This is why all settlements are protected and people seldom roam far from them.Still, Thule is not really that new; deep inside its jungles and verdant forests are traces of lost civilizations as there are treasures and secrets that wait to be rediscovered.

Humans are the prevalent species. Most are barbarians that try to survive this hostile environment with technology at the level of our Earth’s Bronze Age. These hardened people live by the rule of survival of the fittest. This rule is true throughout Thule; the strong try always to oppress the weak and slavery is common. Ethics are questionable and the ethos common to other settings is pretty much absent there. It is a dark do or die world.

Magic is generally considered alien and forbidden; spellcasters both arcane and divine are but a  few and thus are equally feared and respected. Most lores of magic are either lost or hidden for further research. Magic items are all relics of old and there is no market for them, at least they cannot be traded for money.

Humans are the prevalent species. Most of them are barbarians that try to survive the savage continent although there is a healthy number of them that have established cities. There are distinct ethnic human groups in Thule, each with their own territory and characteristics, but with no distinction rules wise. The most distinct are the Atlanteans, higher breed Humans and the descendants of the greatest human civilization up to date, lost now beneath the waves. Atlanteans are a distinct race in Thulean rules.

There are also the Elves, decadent people lost in long meaningless lives. The Dwarves are miners, master smiths and keepers of the secret of steel. Halflings are savage barbarians that protect their territory with bestial fury. 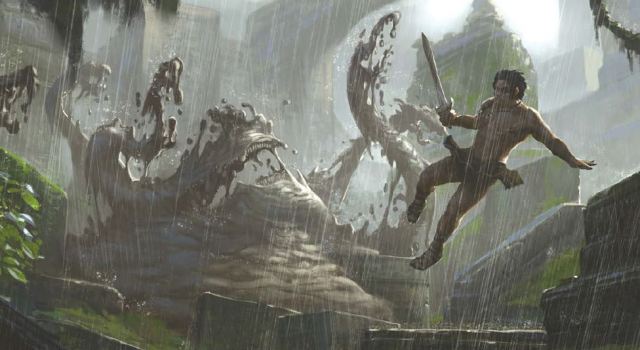 As already stated above, Primeval Thule is a rough and unforgiving place, where magic is not widely used and ethics are questionable. So, these factors subsequently limit class choices. For instance, Paladins are extremely rare, Monks are even more rare as Monasteries normally do not exist at all. Rangers do exist, either as trained soldiers, guides to the perilous trails of Thule or even as elite tribal hunters. The same applies for Rogues, as there are a multitude of cutthroats in the mud strewn alleys of Thulean cities. Fighters are the few really trained soldiers or veterans for hire or even seasoned gladiators. Casters of any kind, as mentioned above, are rare; Clerics that are able to cast spells are considered to be really favored by their Gods, Wizards are the rare scholars who research tomes of old to unearth lost magics, Sorcerers are the unfortunate few who are infused with magic, Warlocks are the insane enough to parley with powerful alien entities and there is no standing Bardic tradition that can enrich artistic expression with magic. Naturally, Barbarians are aplenty in Thule and come in all shapes and sizes.

The Primeval Thule Setting Guide does provide clues for adjusting the basic PHB classes in Thule, although there are no specific guidelines for adjusting subclasses in the setting. So it is up to each DM to do that (hint: we might as well do that in a future article). Moreover in the Primeval Thule Player’s Companion one can find one Thulean Subclass for all of the PHB Classes, except from Bards, Fighters, Monks and Wizards.

The real breakthrough of the Setting is the introduction of Narratives. Narratives are the Thulean alternative to character backgrounds but they are even more. As D&D 5e Backgrounds focus more on the PCs backstory and what happened before that first level, Narratives continue on to what the PC does in between adventures as well. A mix of background and profession so to say. So, more than a backstory, a Narrative grants the PC income, followers and influence in the world.

Character equipment is (to my personal delight) limited. Current level of technology cannot provide much; some common weapons and armor in 5e PHB haven’t been invented yet in Thule. Also, materials are more mundane; many tribes use bone and stone weapons and steel is really rare. Additionally, taking into account that magic is rare, magic equipment (weapons, armor, potions etc.) is equally hard to find; there is no market for such and even the simplest magic item is considered priceless.

Moreover, adventurers in Thule must be ready for everything and not just be physically tough; madness is a constant danger as long lost horrors arise again and also sly criminals can talk their way through.

These all mean that adventurers in Thule are made from really hard stuff. But this is essential in order to survive all of the dangers that dwell there.

Speaking of horrors, Thule has a lot of them. From savage Beastmen to alien monsters and Great Old Ones. Traditional D&D monsters are either completely absent or revamped. Thulean Dragons for instance are not the ingenious manipulators we all love to hate, but intelligent magnificent beasts. There are no Goblins, no Orcs, no Beholders either (but of course, this should not prevent anyone from inducing any of them to their campaign). Also, the land itself is forbidding and in many cases uninviting, while the local fauna and flora can easily devour unsuspected visitors.

Similarly, the perils do not just stop outside any settlement’s walls. Evil cults, cutthroats and street toughs can abruptly end your time in Thule. Rakshasas use their place of power to weave century old plans while newly wealthy merchants try to force their way to nobility. This means that Thule is much more than brawny barbarians fighting sabretooths; danger in Thule has numerous faces and lurks in every corner.

In order to explore all the wonders Primeval Thule has to offer all you have to do is get a Primeval Thule Campaign Setting for D&D 5e. This has pretty much everything one really needs to start playing in Thule using D&D 5e rules.

If you want ready-made adventures in Thule, there are such. I’m not going to list each and everyone, but here’s a link with all published material in DTRPG

So, ready to delve into steaming jungles and battle eldritch horrors with flint weapons? Want to raid pirate settlements in underwater ruins? How about trade magic items with power hungry Serpentmen? Primeval Thule can provide all of these and many many more!

Emmanuel Tragakis was born of the land of myths and legends, comes with many different labels throughout the day. By night though he is the Bat…, ermmm he is a guy passionate for Fantasy and tabletop gaming. And cars. And miniature wargaming. And aviation. Sometimes also draws.