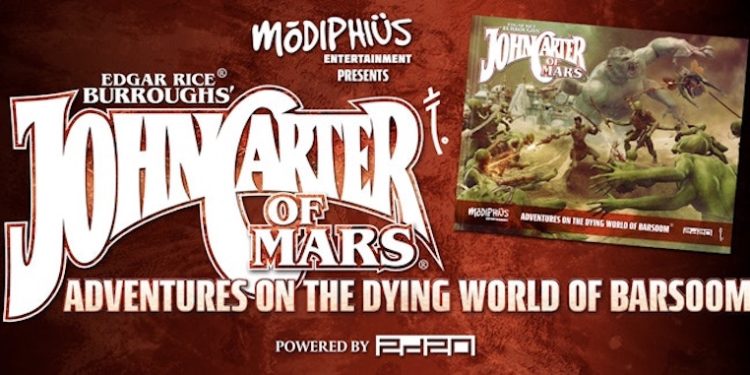 Adventures on The Dying World of Barsoom. A planetary romance tabletop roleplaying game from the mind of Edgar Rice Burroughs

John Carter of Mars – Adventures on The Dying World of Barsoom is a planetary romance tabletop role-playing game. We’ve created it under license and with the cooperation of the estate of Edgar Rice Burroughs, author of the original Barsoom novels. We’ve also had guidance of Scott Tracy Griffin one of the leading scholars of his works to ensure utmost authenticity. Using a pulp-action inspired narrative variant of Mōdiphiüs’ 2d20 system, Momentum, John Carter of Mars allows players to take the role of various adventurers and heroes as they travel, battle, and romance their way across the wondrous and dangerous world known to its natives as Barsoom.

Play as John Carter, the princess Dejah Thoris or the fearsome Thark warrior Tars Tarkas – or create your own new heroes from a wide variety of options.

First brought to life by Tarzan author Edgar Rice Burroughs in 1912,  John Carter is a Confederate officer who survives the American Civil War only to find himself transported to a fantastic version of Mars called Barsoom. The Mars stories spawned a generation of writers who went on to create such classic worlds as Dune, Star Wars, Superman, Avatar and Dungeons & Dragons. It is only fitting that John Carter is brought to life in the industry Burroughs’ ideas helped inspire.  As with many other gamers, the John Carter books inspired a love for Barsoom in Chris Birch, founder of Mōdiphiüs who nurtured a collection of gradually disintegrating novels:

“I remember finding the whole set in a quirky bookstore in Shepherds Bush when I first moved to London, complete with gorgeous 70’s art. The adventures of the Warlord and his friends were hugely inspirational. These classic planetary-romance stories took me on a fantastic journey, and it’s been a dream to see Barsoom come to life through a series of games and miniatures.”

John Carter —The Roleplaying Game
Explore the wonders of Barsoom from the vast deserts to the ancient cities. Discover the forgotten secrets of a world that was old when life first spawned in the oceans of Earth. Play as pilots, warriors, scientists, or one of the terrifying green Tharks.  Create you own Barsoom adventures or take on the great journeys as John Carter himself along side Dejah Thoris, Kantos Kan, Xodar, Tars Tarkas, Thuvia of Ptarth, Carthoris of Helium or any of the other major heroes and heroines of Barsoom.

John Carter: Swords of Mars—Miniatures
A line of collectible miniatures for use with the roleplaying game brings your adventures to the battlefield. Play small skirmishes or fight a war for the dying planet—scalable rules provide for both. Defend ruins against a horde of Tharks, raid the city of Helium to capture the Princess or take your battle airborne with the Red Martian navies.

John Carter: Warlord of Mars—The Board Game
Enact the greatest adventures across the ancient world of Barsoom as you lead your heroes through crumbling ruins and take to the skies in the beautiful ships of the Helium Navy. Can you save Barsoom from ruin at the hands of dastardly scientists or ancient forces?

For more information on the John Carter tabletop gaming line, sign up to travel to Barsoom!

The project is currently funded at 420%.  You can see where they are at right now by checking out the following Kicktraq details:

Combatting the Far Realm: The Zodiac and ...