I Was Traveling the Planes and I Found Dragons, Part 5

This time I’m doing Radiant dragons, one of the three dragons released for the Spelljammer setting. This is in response to a commenter’s request.

Asteroid lairs. Radiant dragons prefer to lair in the asteroid that they were born in, often returning years later and usurping the current inhabitants. Inside these asteroid lairs Radiant dragons will often gather, as many of the clutch mates will stay together; occasionally this gives rise to asteroid belts littered with the lairs of Radiant dragons. Inside their lairs they often keep very little of much value but instead keep items of personal significance.

Mimics. Radiant dragons will often claim to have created the spell Bigby’s hand and give it their own names such as Radiant claw. Whenever a traveler brings up the topic of Bigby, Radiant dragons will often bluster, claiming that he is a liar. Several scholars have studied their claim in great detail, and have come to the conclusion that they stole the spell from Bigby with their natural talent for mimicry. Many Radiant dragons deny this, even inside a zone of truth, suggesting the claim that Bigby lied is a story passed down by the Radiant dragons to their young. Not only do they claim to have invented Bigby’s hand, they also take on the shape and identities of famous pilots; in some places this is considered to be a great honour, but in others it is just a bloody nuance.

Entirely Spaceborne. Radiant dragons spend their entire lives in space, and are known as the only creatures of that size that are natural spelljammers. Some sages suggest that this is the result of a deal with the arcane, as Radiant dragons avoid them. However, others believe it to be a natural ability of these dragons even though they lie about many other things. There are reports of them gliding over solar bodies as if they were absorbing heat, some believe they just enjoy the sensation of the heat on their wings while others believe them to be absorbing magical energy. 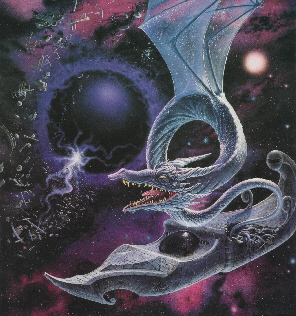 On initiative count 20 (losing initiative ties), the dragon takes a lair action to cause one of the following effects; the dragon can’t use the same effect 2 rounds in a row:

Due to the vastness of space a Radiant dragon has no regional effects.

Dragonborn. Radiant dragonborn have ressistance to radiant damage, you also have a breath weapon that acts like the magic missile spell.

Next I’ll be doing Arboreal dragons.