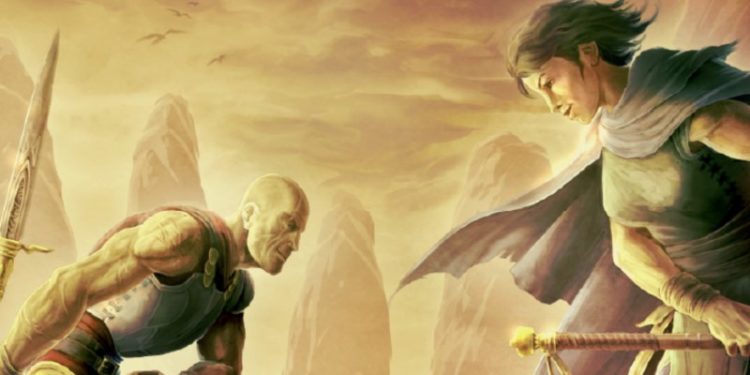 Welcome back to the History of the Classes, which is a thing you can be forgiven for completely forgetting that I write here on Tribality. Last time in the History of the Fighter, I covered the 3.0 Oriental Adventures. We have a lot more 3.x-era material to cover, though – not even counting reader requests that I might still receive. Today I’m talking about Arcana Evolved, and I know I still want to do Iron Heroes and Book of Nine Swords. Oh, and I guess it would be weird not to do Pathfinder.

Now, it’s possible that you haven’t heard of Arcana Unearthed and Arcana Evolved, so let’s do a quick rundown. (Don’t get these confused with Unearthed Arcana, the 1e or 3.5e supplements, or with “Unearthed Arcana,” the monthly playtest content release from WotC.) In 2003, Monte Cook released Monte Cook’s Arcana Unearthed, by and starring Monte Cook. It’s 3.0-adjacent, with some variant engine-level rules, a completely different list of classes, a mostly different list of races, and completely different feats and spells. In 2005, following the release of the 3.5 revision, Monte Cook released Monte Cook’s Arcana Evolved, which modifies a few of the classes, expands gameplay from 20 levels to 25 levels, and incorporates content from two AU splatbooks.

I have a complicated relationship with these rules. The short version is, they’re 75% of the way toward being really good. The remaining 25% is, unfortunately, really important. I played a warmain for ten years of a campaign, going from 1st to 14th level, before life events forced me to drop out of the game. That campaign’s GM is one of my regular readers, so… hi! I’m going to try to avoid an eleven-part article series on what works and what doesn’t in AU/AE, but in brief:

Let’s move on. For this article, I’m covering only a few classes, several of which could be convincingly argued as belonging more clearly to other class histories. With difficulty, I’m stopping at covering the mage blade, ritual warrior, unfettered, and warmain. It would be great to cover the champion and totem warrior too, but those classes are especially lengthy and don’t have as much clear fighter DNA, names notwithstanding. If I get super motivated, maybe they’ll get their own article someday.

The class name carries the concept here just fine: it’s a fighter/mage in a single class. It’s about as much like an Eldritch Knight as you could ask for.

And that’s the class. With 25 levels, all of these classes will have a lot of features. The mage blade definitely suffers from a lot of features that are both limited use and not all that impressive. Since it’s also a per-day spellcasting class, you mostly have your weapon and a huge assortment of 1/day options. It doesn’t offer anything particularly new to the concepts of swordmages, spellswords, Eldritch Knights, gishes, or bladesingers. I like the spell-negation features thematically if not mechanically.

PS. I do plan to make fighter-mages their own History of the Classes series, because there are so many entries over the years.

Probably the easiest way to sum this up is: you remember the sword forms that Rand al’Thor learns in Wheel of Time? It does that. To put it another way: what if katas?

The ritual warrior could be a lot of different things: basically anything except a self-taught warrior. They fight in a high, formalized style, since they have names for their moves. Their moves pretty much bring them up to parity with other fighter-types. It’s not a terrible chassis for a rebuild, though – like more flavorful combat rites, and fewer dead levels. Mainly, I think they just need more going on with their damage output.

This is the class for rogues and agile fighters, though this is still 3.x where Dex never applies to damage rolls. If your sword’s quickness is everything and you aren’t into armor, you’ve come to the right place.

I think the unfettered amounts to a pretty solid class, overall. They’re still deeply vulnerable to a lot of spells (the many kinds of spells that can’t be parried), and their spell parrying is only a saving throw boost. My issues with the class seemed more appropriate in 2005, I think. The thing I like about it is that AE does go ahead and split agile fighters and heavy fighters into two classes, creating space for features more appropriate to each.

This is the one I played. It’s the heavy fighter, trending toward ultraheavy as they advance. They’re the Strongdude counterpart to the unfettered Quick Guy.

I like the themes of the warmain and the general approach, but there are a lot of dead levels and a lot of passive bonuses to the math. I dearly wish there had been support for noncombat pillars of play, or more active features to use during combat. I’m not remotely objective about this, though: I love 5e’s class design dynamic, especially the fighter.

What do these four classes have to tell us about the evolution of the fighter? There’s one solid entry in the fighter-mage set, with features that are at least sympathetic to the Eldritch Knight’s. The ritual warrior points the way toward the Battle Master, though it doesn’t do it nearly as well. The unfettered is basically a Swashbuckler rogue or a Dex-based Champion fighter, or a Battle Master. I mean, the Parry and Riposte maneuvers are good representation of the unfettered by themselves. The warmain, likewise, easily fits into a Str-based Champion or Battle Master. 5e might very well spin the unfettered and warmain as subclasses of a single class, or even contain the whole difference in their choice of Fighting Style and ability scores.

I may not have a lot of love for AE as a ruleset, and its class design in particular. It may just be independent invention, regardless of Mearls’s work for Malhavoc Press (which I’ll be covering next time in this series), but it still shares a lot of DNA with 5e’s fighter.

On a personal note, I’ve just released In the Company of Unicorns 5e with Rite Publishing, on DriveThruRPG. This is a supplement for playing unicorns as PCs in D&D, reimagining BJ Hensley’s Pathfinder work. I hope you’ll check it out, even if you’ve never before thought that a unicorn could be a cool player character.

Resource Management and the Starbroker Rogue