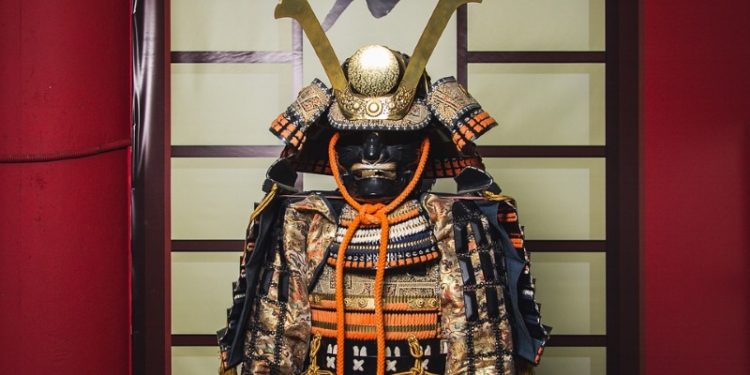 I’m mostly over my cold, even if the rest of my family is still under the weather. Today, I’m pressing on toward the samurai classes of 3.x, found in 3.0’s Oriental Adventures and 3.5’s Complete Warrior. I’ll probably work in a few other things along the way. Now, if you’re thinking, “but isn’t this just the fighter class?” then… Oriental Adventures has no particular contributions to offer fighters. The mechanical differences are one new option for your bonus fighter feats, and that’s it. Thematically, it’s defined by not being samurai, full stop.

The flavor text attached to the samurai class is exactly what you’d expect if you have heard of samurai from a Western viewpoint ever in your life. The idea that it’s fundamentally different from a character with the fighter class who has a chain of command is… one of those odd things about having a class-based game.

And that’s that. The ki shout and great ki shout we might have expected from the 1e OA got reinterpreted as feats, and so are open to others.

In fairness, the Clans are richly written and add a lot of character to their samurai. More tabletop settings should emphasize such powerful defining features, as with Rokugan’s Clans or Hogwarts’ Houses. Planescape’s factions are a great example of this, though I’m not sure that players connected with them as strongly as they could. Eberron’s Dragonmarked Houses would be a clearer example of this if there were more of a firm shove toward all players belonging to a House. All of White Wolf’s properties have excelled in this. But I digress… because there just isn’t that much there in the samurai of OA.

I’m not diving deep into fighter and samurai prestige classes like I did for OA monks, but perhaps an overview? Battle Maiden is one of two cavalry prestige classes representing the Unicorn clan. It’s just barely possible for samurai characters, whatever the text may suggest, thanks to its requirement of 10 ranks in Handle Animal… not a class skill for samurai. If you’re sensible and introduce the Cosmopolitan feat from the FRCS, or a comparable “add a new skill to your class skill list” feat from elsewhere, then this becomes doable. Battle Maidens are more about keeping the same mount alive and being awesome with it, and about being exclusively women. Kishi Chargers seem to be more the type to use and lose horses, emphasizing additional abilities for the rider at the mount’s expense. Kishi Chargers have more emphasis on active features, while Battle Maidens have possibly the most flat-out insane passive feature I’ve seen in awhile. By 9th level, Battle Maidens have a +6 bonus that applies to Ride checks, initiative, AC while mounted, and attack rolls while mounted.

Bear Warriors are really here for barbarians or sohei. (PS., I am a huge fan of sohei; I played a sohei in a friend’s Romance of the Three Kingdoms campaign for something like ten levels. If I had been covering OA during the History of the Paladin series, there would have been a bit about sohei.) If you really misunderstood your right to bear arms, this prestige class is here for you. Because you shapeshift.

Next up is the Iaijutsu Master, for samurai with Dex as a primary stat and a Charisma as a strong secondary stat. This would work a lot better if you didn’t have to soldier through six samurai levels to finally get your build to play right. It has a lot of dead levels and less throughput than you might hope to see, though they can probably be explosive in an iaijutsu duel if they can survive the rest of the multiple attribute dependency.

The Singh Rager is equally friendly to fighters and samurai. It is permission to play a Lawful character with “fury” (that’s with one R, even though they’re Lions), which is just like a barbarian’s rage. Overall, the prestige class should be fun and potent. It spends a lot of time solving the action economy issues that fighters and samurai have in 3.0, like not getting to both move and make a full attack.

Finally, the Weapon Master takes hyper-specialization in a weapon to the next level. This basically does what you think it would do, with an emphasis on both burst and sustained damage. More attacks, more damage, more crits, more explosive crits. It’s probably really fun to play, as long as you want your character to be laser-focused on damage output.

I’ve mentioned Iaijutsu Focus a couple of times now, so I should explain what the heck it does. It’s a kind of check-driven Sneak Attack that only affects flat-footed targets, and only when you’re drawing a weapon. When OA came out, there weren’t a lot of ways to make someone flat-footed after the first round of combat, but I’m pretty sure that changed as 3.x matured. Anyway, an Iaijutsu Focus check grants scaling damage bonuses (up to +9d6 for check results of 50+) when you’re drawing a weapon against a flat-footed opponent or striking an inanimate object. It wouldn’t be D&D and katanas if D&D katanas couldn’t cut through tank armor! It also replaces your initiative check in a formal iaijutsu duel. If you’re going to present samurai duels as super special and cinematic (as L5R does), this is a pretty good way to do it.

Overall, the samurai would fall flat on its own, but as a baseline class to get out of as soon as your prestige class comes along, it’s fine. The setting flavor is everything here. Giving fighter archetypes a solid way into the social interaction pillar of play is great. Their clear position in the social order – a hard push against the “dumb brute” default of fighters – is exactly what I like to see. I wish the core 3.0 fighter had set out to incorporate this as a reasonable possibility for the class.

The 3.5 revision takes a completely different approach to samurai by returning to the 1e OA roots: a large number of specific features, kiai shout effects, and fear effects.

I can summarize the class as seven bonus feats that the rules choose for you, plus a non-scaling damage booster and a fear effect that stops you from making a full attack or off-hand attack. You’re absolutely better off with stacking Weapon Focus and Weapon Specialization feats (passive bonuses! No multiple attribute dependency! So what if you can only apply them to one weapon?) than relying on the 4/day Kiai Smite. Stare Down and its follow-ons are mostly as bad as or worse than Kiai Shout and Greater Kiai Shout, a pair of feats introduced in Complete Warrior. I am pretty sure you’re better off with a fighter out of the 3.5 Player’s Handbook and literally no other books than you are with the samurai class.

The theme of a dual-wielding fighter who shouts to smite and has an intimidating presence is a pretty standard expression of the samurai. The only thing that is outside the fighter’s reach is some of the class skills, but you won’t have enough skill points to take advantage of them to any great degree. If it’s an option, skip this class and hack the Master Samurai prestige class from Sword and Fist. It may be 3.0, but it offers one or two things you can’t get in a better form elsewhere (Supreme Cleave!). (Or, if all of OA is on the table, Singh Rager.) I’m not covering it in detail here, but the short version is that it has a mix of good features and ill-considered ones that don’t work together all that well. Uh, hate to put it this way, but I’m skipping it here because I don’t think I could keep my remarks polite throughout. If you’re reading this and you were part of that design and development team, I’m sorry. In your defense, it was super early in 3.0 and it wasn’t yet obvious how some things would shake out.