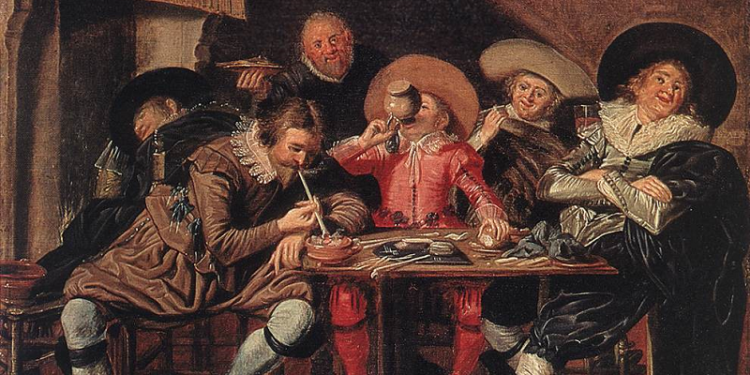 In the comments of this excellent article by Blake Ryan, I speak a little bit about some of the session zero stuff I use in the online game I run. As it turns out, the reason I haven’t yet written an article on this is because I thought I already did write an article on it. However, it doesn’t seem to be the case. I wrote one for the transmissions of Technoir, but apparently never did one for the thing I use as the central conceit for group dynamic for the virtual tabletop game. Maybe because it’s a variant on another system? I don’t know fam. Sometimes I just make decisions that don’t make sense, I guess. Anyway, I am having great success with this for my online group that previously failed twice in getting an online campaign going. Let’s talk about relationship maps and social progress.

If You Ignore the Past…

A quick bit of history of the path leading the relationship map session zero method. The game I use this is in exclusively online. It contains six players, many of whom have never met each other. A handful of us play other games together, but the others have no interaction with each other outside of the game. This is actually the third iteration of this gaming group. We’ve replaced three players in that time-span, and I learned a lot about this particular group’s dynamic.

First, several of the players are not tabletop veterans. Their exposure to D&D is solely through things like Neverwinter Nights or Dungeons & Dragons Online. In their view, D&D is very cut and dry. Vampires are chaotic evil. Necromancy is bad. Killing bandits is standard operating procedure. Paladins are heroic good guys, admired by all. While there is nothing inherently wrong with this approach, it does mean that our first attempt at a game set in Ravenloft was not destined to succeed. Even though the players suggested a love for Gothic horror, it turned out they did not care for what Ravenloft was offering. The oppressive mood was too much for them, and they were not interested in taking it seriously. So, we tried again.

This time around, we dropped two players who were problematic – combative, disruptive, generally not interested in participating, etc. We picked up two additional players – both of whom I knew in real life. This time, I decided I would run various published materials for the Planescape setting. The session zero activity was the characters establishing how they knew each other, and setting play-rules for the group. They were the troubleshooters for a wizard who sent them on dangerous missions because he was a poor boss. They wanted to open a pub in Sigil and contract other adventurers to do their work for them when they got rich enough. This is a good goal, but – despite initial agreement – some of the party wasn’t super into the idea. The setting also proved too weird for some of the players. They just couldn’t get their heads around some of the core Sigil concepts. So, we tried again.

For this third game, I was determined to build a sense of investment from the start. Al-Qadim is a good setting to introduce players to “wider” D&D, since it’s all about morality. Thinking on this, I came up with the idea of taking the Smallville RPG character creation system and modifying it for D&D. A friend once ran a few games of the system using the Marvel universe and we all agreed the best part of the game was creating the characters. Despite not caring for the rest of the system too much – the internal conflict dynamics of the game were not for us – we all loved creating an ice cream shop as our central location…and banning Wolverine from it because he was creeping on young women. “Pssst. Hey little girl. Wanna be my sidekick?”

I wanted to solidify the group goals and identity early on, and I wanted to give the group the chance to have more input on the who’s and where’s – on the surface level, at any rate. The only directive I gave them was “something had to happen to your group/society/family that caused them to lose their standing in society”. Other than that, I told them was they would be basing their operations in Huzuz, the City of Splendor. I knew a broad-strokes outline of what the story would be, but made sure to leave more than enough room to shape the parts to what they would come up with.

Getting to the Monkey 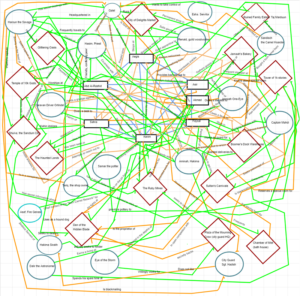 I am starting with the finished product to give you an immediate sense of scale. This is the result of six players going through the steps I outline below. To make the map larger or smaller, you just add additional or subtract rounds with the steps you want. In the second map – which I will discuss later – it is smaller due to nixing the last two rounds. I just don’t need as much detail in that one, so it makes sense to keep is shorter.

Here are the general rules:

That’s pretty much it for the rules. As far as a map key, I refined it to be the following:

The first map above doesn’t have point #4, but map two does. This is a massive storytelling tool improvement, in my opinion. If you are keeping these items secret from players – I am not – you can just notate them as S1, S2, S3, etc. and keep a log for yourself.

Around the Rounds We Go

The initial map is a full nine-round endeavor. Each round provides a set of options from which the players choose one. The (new) indicates the player creates the item. ANY is either an NPC or a location, but not a player character.

As you can tell from the picture above, certain NPCs and locations naturally become hotbeds of connections and players draw upon each other’s ideas with new twists. For example, Haroun the Savage became the first villain of the campaign – having secret connections to other NPCs, ties to locations, goals to do various bad things to players, and possessing positive connections to other players. In one of the more memorable moments, one round turned a location into a ship by making an NPC the captain of it. There is a lot of great, wide-open framing that occurs via this map, while still leaving the details up to the DM to fully expand.

History of the World, Part Two 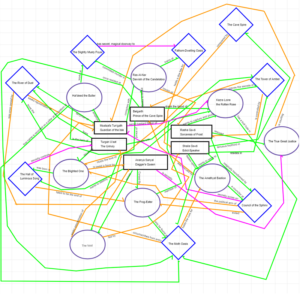 While it might be obvious to others, I feel really smart for recently sitting the players of this game down and had a SECOND session zero. In this case, the map defines a historical time prior to the PC’s timeline. The players of this game are almost 10th level and are starting to get into higher-powered hijinks. In Al-Qadim, that often means geomancers and ruined kingdoms. Since there is a lot of time period that covers, it’s the perfect opportunity to inject some table-sourced lore to ensure the players are as equally invested in the lore of the game as they are their current day proceedings.

All I defined here were the titles of the “player characters” to prompt some ideas from the players. Everything after that is solely their creation. With their increased familiarity, the players show a lot more creativity in some of the connection definitions. We have possible vampires, locations that might be sentient, murders, betrayals, and all manner of other stuff occurring all over the place. It’s great! As the players explore the next region, this history will pop up in lore, text props, and general play. Since they have a hand in the creation, the investment will hopefully be a lot higher than it would otherwise be if I was just throwing my own story at them.

The last point I want to touch on is the difficulty of showing social pillar progress. While there isn’t always a direct correlation between combat and experience points – milestones are dope – your increasing stats is a good way for players to continue to track progress in that regard. Exploration has both map reveals and skill increases as visual progress points. Social progress does rely in part on stats, but the connections and relationships are more than the sum of stats on the page – in most cases. Numbers going up and map revelations are both good visuals that social progress typically lacks – skill increases notwithstanding.

This relationship map allows players to have a good sense of social progress if you update the map regularly. My players lost their minds the first time I added an NPC to the relationship map. This is to say nothing of altering the connections themselves. Afterwards, each expressed pleasure and satisfaction at the map growing with them. This is a huge win for me with this group.

I understand not everyone wants to give up control or agency to what looks like a large degree. However, I haven’t felt restricted in telling the story at all. Instead, I just weave it into the story I am framing and let the players see the result of their work. Not every connection the players have plays straight, nor does it mean I twist everything. All it means is I consider the connections and use them as a consistency check against what I am doing. If I want to create new areas or NPCs, I do. I just make sure I can tie them to the existing things the players care about. This gives even my whole cloth creations more weight than if I had just introduced them without this collaborative framework.

For my online group, this has been a tremendous success and I will be using it again shortly for yet another game system – Tenra Bansho Zero. This group was notoriously hard for me to get on the same page and engage, and this system has saved me and the group. Is it for everyone? Nothing is. However, if you are having the same problems I had, or you are looking to try to engage your players more readily, give it a shot. I don’t think you’ll be disappointed.