Today I present Harraegir – a fantasy area of that you can use for a one shot, as part of the Rikirta setting, or link it to other settings.

Many limestone caverns and coral reefs. Libraries have coral tablets with runes. Sea plant farms on the sea bed. Some giant Manta ray) and giant Octopus in the area. Citizens make sure not to over fish in one area.

Order of Callisto – (Mercenary-Exploration group) Patrol the sea around Harraegir with Water Elementals.

• Order of Callisto want artefacts from sunken ruins recovered.
• Discover what is on Tetrae Isles to the west. (Owlbears)
• Locate the Hall of Necros, standard necro school, but beneath is crypt where eternals, concepts & universes come to die.
• Recover outpost from Demons from Illirvidir (aquatic ruins to the east) 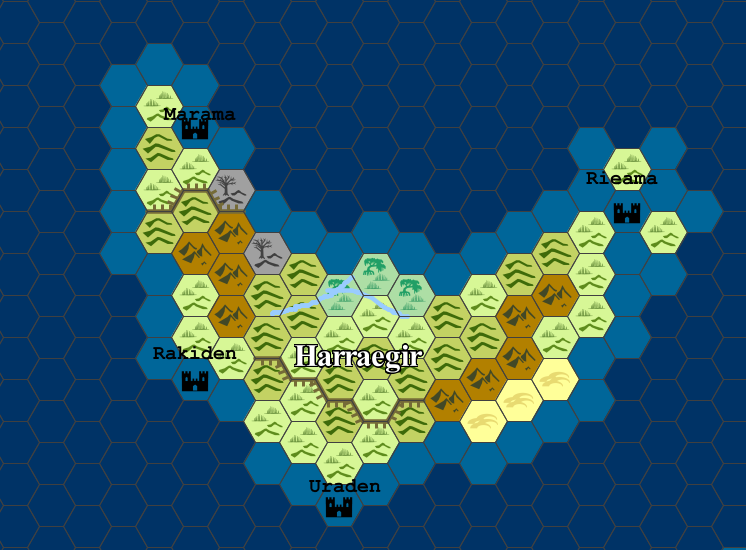 Cultural Notes :
– Archaeopteryx are considered sacred, cannot be harmed.
– Buildings : Farms – Many corn fields and vineyards. Homes & Temples-Stepped pyramids. Theatres – open air, amphitheatres with weekly plays. Many pools and gardens throughout towns. Public bath-houses and marketplaces.
– Caste System : Hierarchy of society is Sphinxes, Priests, Warriors/Sorcerers and then Workers.
– Cooperative Lycanthropes are considered Blessed by the Animal Spirits, and watched. Violent Lycanthropes are considered Cursed by Animal Spirits, and hunted by the Mantyr (Guardians, Ocean) Church.
– Every seven years the Priests of each nation decide on a racial enemy for the next seven years.
– Free market economy.
– Gardens and parks are shared communal territory.
– Lots of bronze tools still in regular use. Iron and steel weapons.
– Most wear amulets, symbol of clan/god/animals etc.
– Pass on stories and teaching by reciting tales and group songs. Written lore is on home and temple walls-cartouches.
– People believe in good and honest life leads to reincarnation.
– Public schools for 7-12 year olds. Learning Language, Religion & World lore.
– Scarab beetles and Ibis are considered sacred. To see them near your home is a good omen.

Where to slot in Harraegir in other settings –
• Greyhawk-South of Amedio Jungle, refugees from Scarlet Brotherhood or Pomraj humanoids may come here.
• Faerun-West of Calishan, Krynn. Explorers seeking new markets and new lands may discover this area.
• West of Northern Ergoth. Merfolk have a non-aggression pact with the Elves of Ergoth.

The Bones of Kovach – Alternate Crafting ...