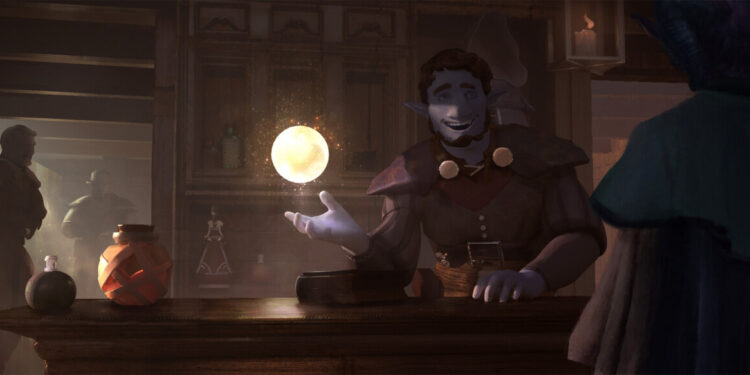 Magic shops in D&D and other fantasy games have always been something that came and went throughout the different editions. They were a vital part in 3e and 4e as the game highly demanded the PCs to have magic items to progress. Where does 5e stand in this?

A magic item is usually created by the DM to have an easy fun way for the player characters to access cool magic stuff they want. The characters don’t solely depend on the items they find in dungeons but they can also get the specific ones they want in this store. At the end of the day, it all comes back to what the DM wants to offer the players. If the item isn’t either in a dungeon or in a magic shop, then there’s no possibility for the player character to get hold of it. That way, the DM always have final say on what magic items to present the players.

Magic items are also great for those kinds of players who have a vision of their character in their mind but are missing a key item to achieve it. That’s when they can commission something special to the shopkeeper and get their Captain America shield they wanted. Additionally, magic shops give a purpose to player characters to save money to achieve something they want or make a deal with the shopkeeper for it. In summary, there seems to be no negative thing to adding a magic shop. What is all the fuss from this article about then? 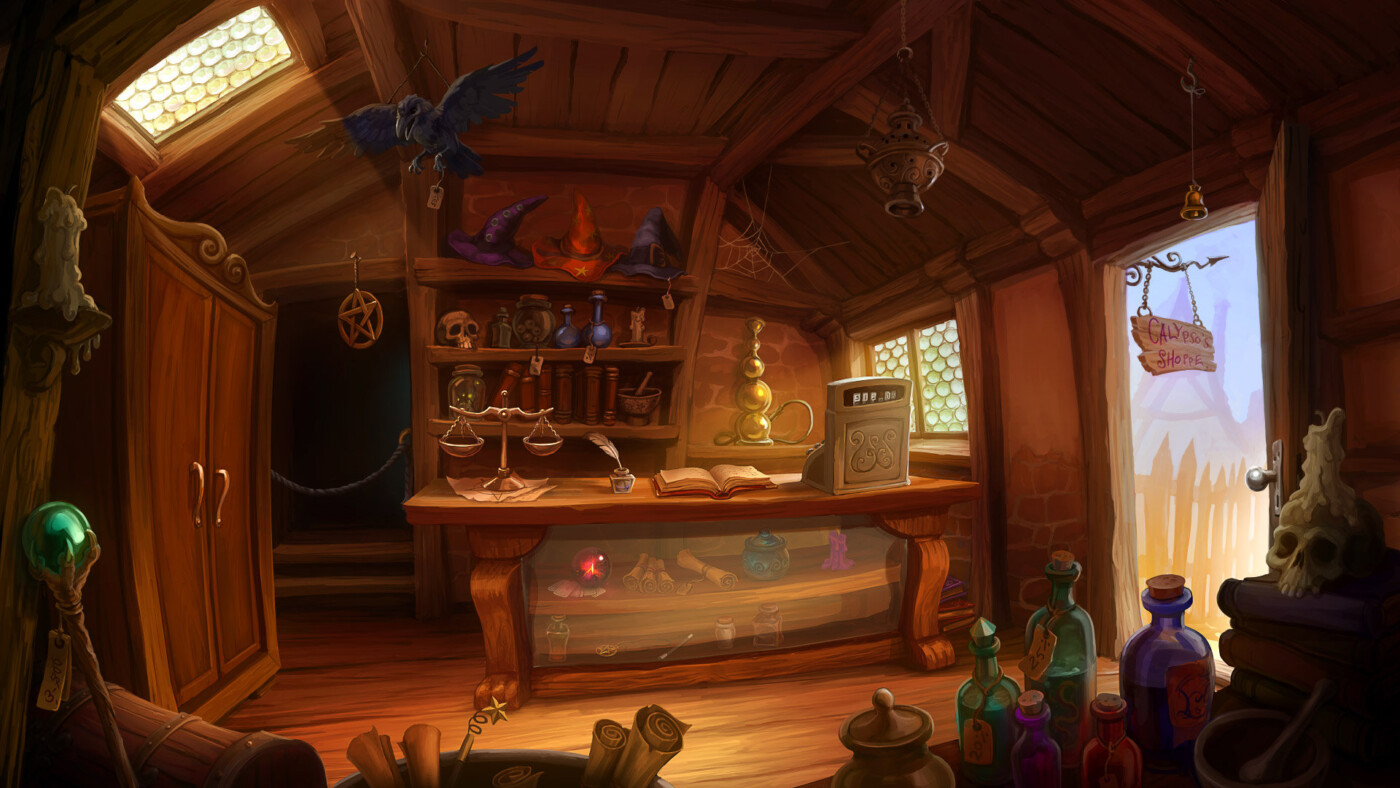 What Magic Shops mean from a Worldbuilding Standpoint

Let’s stop for a second and think about what a magic item shop means for your world. You can achieve items with magical properties, much better than your regular ones if you have the money. This means that a nobleman can buy many of these products and become a better adventurer than the player party instantly, some kind of Batman. A thieves’ guild could prepare a raid and get all magic items to use as weapons. Townsfolk may save money to get something that creates food out of nowhere so they don’t have to worry about food anymore.

By creating magic shops you are making magic something mundane in your world. There are settings that heavily lean on that, such as Eberron. I personally really enjoy the idea of having magic items be something that is truly special. If you want a +1 sword you don’t buy it at the shop in the corner of the street, but go on an adventure to find Kithrimayas, the throatshlasher, the magic +1 dagger lying in the coffin of an elven hero of times past.

From a worldbuilding standpoint, magic shops might make weapons mass-produced to be given to the army. Sure, you can make magic items crazy expensive so only adventurers can afford to acquire them, but still, all the other things I talked about still remain.

D&D 5e is a game built from the ground up to be balanced no magic items required. A campaign can go from level 1 to 20 without a single magic item making an appearance and at no moment will the player characters feel the encounters thrown at them using the encounter guidelines is unfair. This wasn’t the same in past editions, where the game forced the PCs to get magic items if they wanted to be able to face some of the enemies.

Having magic items be an additional thing to the character progression allows DMs to be the ones that actually decide when to give the characters a boost. If some character is doing a bit worse than the rest in damage, then maybe a rumor appears of a magic sword. It’s not difficult in 5e to break the whole encounter balancing by giving more magic items than needed, but the DM can learn to adapt to their PCs if they wanted to go that route.

Let’s face it. Magic items are incredibly cool, and any player that has played a fair deal of videogame RPGs will demand them at your table. Wielding a normal wand isn’t nearly as cool as casting a spell from the Staff of the Lich King, which has a skull with an open mouth on its top. If you give this staff to a magic shop to sell, then that either means that the shopkeeper can create insanely great things, or that some other adventurer didn’t need it anymore and sold it. Either way, that says something about your world.

Personally, I hate the idea of buying a magic item because I enjoy them having a story. When you think of Excalibur your mind surely goes to the sword in the stone, and all the legend that surrounds it. If my players look at their magic ring, and that reminds them of all the excitement of beating a beholder to get it, then that is a win in my book. You don’t get to have those memories with magic items bought from a shop! Sure, you can have the Staff of the Lich King I talked about before, with a whole page of backstory of its own that the players will never get to know, but it doesn’t have the same weight as getting it yourself.

Lastly, in my opinion, magic shops can make magic items lose a bit of what makes them special. If a player goes into the shop, sees one of the swords, and says “Oh, it’s just another +1 sword. We’ve already got 3 of those”, then you lose a bit of the cool factor a sword has and brings you out of the immersion. If you find a magic ax in a dungeon, on the other hand, that mysticism it has lasts much longer because you don’t fully know what it does.

The elephant in the room, however, is that 5e does a pretty bad job in giving PCs things to spend their gold in. Even if they were to pay their expenses and a great dinner they still may not use more than 10gp. What happens when the PCs start raiding dragon hoards or earning thousands of coins as a reward from doing a mission? Even though it is not set in the edition, that’s what PCs would normally use to get magic items. That’s why so many people recur to using magic shops. There’s no real solution to this if you don’t plan on having magic shops besides using the money to raise armies or build fortresses, which might not be what you are looking for in your game. However, there is a middle ground to be found:

What if I agree but still want my players to be able to buy magic items?

I’ve found a great way to not obliterate your worldbuilding nor have magic items be less cool or special. Matt Colville in his Chain of Archeron game had interdimensional magic shops that can be summoned by a very select group of people. This makes the shop all the more special as it is incredibly difficult to find access to one, maybe making you have to do a mission for a nobleman to gain access to it for an hour. There’s something special about buying something from there. Another great way to have magic items be bought is not by creating a magic shop, but underground secret auctions. In these, you can have the player characters compete trying to get a magic item that is widely known and revered against a rival adventurers guild, creating a very memorable story. This is a unique thing, not a mass-produced one, meaning that these items keep being extremely special.

If you want to go the extra mile, you can place magic shops in other dimensions. These are places to which only a few can get, and the seller may have some tricks up their sleeve. There sure is a risk-reward to be had by getting something from these kinds of shops, and that’s what makes the things you get from here special.

As you may have seen, I have many reasons to dislike magic shops. However, there are many other reasons to like them as well. You are the one deciding this for your table. Even if you completely disagree with my opinion, I hope at least it has you thinking about all things that having magic shops involves.

What’s your opinion on magic shops? Do you use magic shops at your table? Is there a reason why you agree/disagree with what I say? Let us chat about it in the comments below!

How to Map Your Campaign Setting