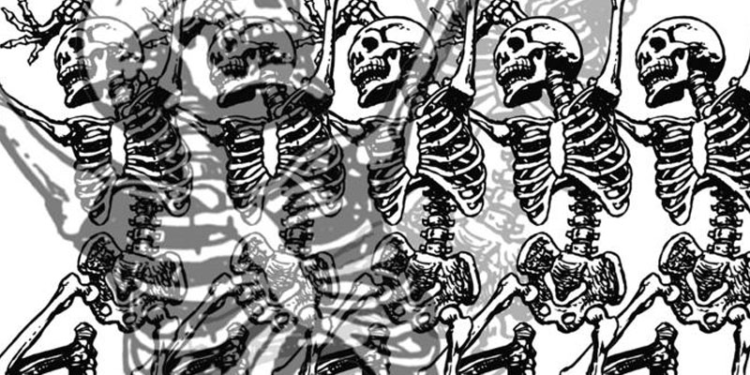 It’s October, which means it’s time to get spooky. Everyone knows that inside every person is a skeleton waiting to get out. What people might not know is that all of those skeletons need to make sure they have the best gear possible when they go to fight in the Skeleton War. Outside of calcium, magical items offer the best path to success against the itinerant flesh sacks so foolishly opposing them. While skeletons acknowledge attunement is a fine way to provide balance in their war, it’s well known these bone-barians crave more narrative throughput in their crusade. For a skeleton, any item they possess must tell a story. They don’t have pockets, so they can’t just hide their magical shame. So, let’s take a look at five magic items with spooky atombments. The skeletons don’t want to crypt keep it to themselves.


This shield of stitched-together leather stretched over a pieced-together rib cage cuts an oddly asymmetrical appearance.  The black metal stitching gives the shield a strange glint, and leather reverberates with a sound not unlike laughter.

Wailing Terror. As an action, you may cause creatures in a 15-foot cone in front of you to succeed on a DC 19 Constitution saving throw or be knocked prone, become frightened, and suffer 4d10 psychic damage. On a successful saving throw, creatures suffer half as much damage and are not knocked prone or frightened. Once use this ability, roll a d6 at the beginning of each of your turns. On a result of a 6, this ability is recharged and may be used again. If the ability is not recharged this way, it may be used again after one hour.

Sentience. Rattlecage is a sentient chaotic evil shield with an Intelligence of 12, a Wisdom of 16, and a Charisma of 18. It has hearing and darkvision out to a range of 120 feet.

The shield can speak, read, and understand Common and Abyssal, and can communicate with its wielder telepathically. It speaks as if several voices are speaking at one, all fighting each other for dominance. While you are attuned to it, Naulata also understands every language you know.

Personality. Rattlecage speaks erratically, offering a barrage of suggestions, commands, and attempts to confusion and enrage its wielder into action. .

The shield’s purpose is to torture and punish souls deemed deserving of torment by its creator, a forgotten god of the dead. It seeks to punish the wicked, but unfortunately considers everyone wicked through a flaw of its creation. Rattlecage believes in mutable plans that inflict the most chaos and confusion, possible. Rattlecage grows easily bored, and attempts to cajole its user at incessantly until something “exciting” happens. The ultimate goal of Rattlecage seems to be consuming souls, but it doesn’t quite know how to do so. Rattlecage will continually attempt to get its user to discern how it can do so.

Rattlecage will attempt to impose the frightened condition on the wielder whenever it thinks it would be entertaining to do so.  This wielder must succeed on a DC 15 Wisdom saving throw, or become frightened when this occurs. If the wielder succeeds on one of these saving throws, it will not attempt to do so again for 24 hours. The source of the frightened condition will appear to be whatever is most entertaining to Rattlecage.

The first time each day Rattlecage grows bored, its wielder shows kindness, or spares the life of a foe in combat a conflict between it and its wielder occurs immediately.


You have a +1 bonus to AC while wearing this armor.

As an action, you may allow the ghost to manifest from the armor. The ghost remains manifest for one minute, or until you become incapacitated.

While the ghost is manifest, you may use the help action as a bonus action, you have advantage on Wisdom (Perception) and Wisdom (Insight) ability checks, and have advantage on saving throws against becoming charmed or frightened.

As a reaction to taking damage, you have have the ghost grant you its essence, as long as it is manifest. You gain resistance to the damage, and the ghost ends its manifestation. If this damage if force damage, you instead suffer no damage.

Once the ghost manifests, it may not do so again until the following sunset.

This black leather pouch is covered with silver runes, and filled to the brim with chalky grey dust that never diminishes.

These femurs have a +2 bonus to attack and damage rolls, and deal an additional 2d6 necrotic damage on a successful hit.

Any femur not in your possession at the end of your turn crumbles into dust. These femurs function as hand axes for purposes of determining damage and proficiencies.

As an action, you may open your locket, causing the words from your journal to spill out in a 30-foot line in front of you. Creatures caught in the line must succeed on a DC 15 Wisdom saving throw or suffer 6d8 psychic damage and become restrained by the inky-words until the end of your next turn. Creatures who succeed on the saving throw suffer half as much damage, and are not restrained.

Once you have opened the locket, it remains open until the following sunrise, at which time it closes again.

While attuned to this item, you have disadvantage on Wisdom (Perception) ability checks that rely on hearing.

As a reaction to hitting a creature, you may cause the sword to unleash a piercing shriek. Creatures other than yourself within 5 feet of the creature must succeed on a DC 13 Constitution saving throw or suffer 3d6 thunder damage and become deafened. Creatures who succeed on the saving throw suffer half damage and are not deafened.

Once you have used this reaction, you may not do so again until the sword is submerged in warm water for at least one hour.