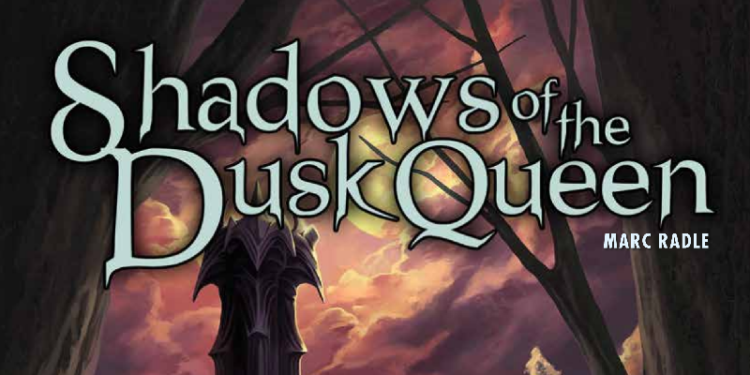 Today I am looking at Shadow of the Dusk Queen, by Marc Radle, from Kobold Press. Tribality received a free review copy of this adventure, along with other Kobold Press products. Shadow of the Dusk Queen is an adventure for 8th level players for use with D&D 5e. The adventure is a “plug and play” style adventure featuring mysterious fey, dope bugbears, and the most compelling reason to take your Deep Woods Off with you since your mom made you do it at summer camp.

The adventure is nineteen pages of playable information, with an additional seven pages of various accoutrements necessary to producing such a document. There are eight stat blocks – split roughly 50-50 between new creatures and specific NPCs. Likewise, there are eight encounters, not including any random encounters players might find themselves in as a result of the random encounter table. Breaking the trend of eight, there is only a single new magic item – though it is a sentient spell book, so it’s not exactly slacking or anything. In case it’s not obvious, the adventure is full of preserved fruit – jam-packed, one might say.

From a layout perspective, I would prefer monsters and NPC be listed together in an appendix. As it stands, each gets an entry during their respective sequential encounter. I understand the reasoning behind it from a flow standpoint, but it’s not what I prefer.

Before I speak about art, let me state again I am pretty color blind. What’s important to me is not necessarily important to everyone else. Contrast and visual clarity are things I prize above all else. With that in mind, most of the art in the adventure is quite excellent. I especially like the cover art, and the art of the two late-stage NPCs in the adventure. There is a picture of a dragon I have trouble making out the details of, but that’s my only quibble with the art in this adventure.

The vibe I get from the adventure leans pretty heavily towards “gothic fairytale” as an overarching theme. The story centers around the Dusk Queen – a shadow fey who is no longer part of any court – returning from “permanent exile.” Without giving too much away, the players have to traverse the queen’s evil forest, and do some “adventure-y stuff” with the queen’s soulbound mirror. You know, typical evil queen stuff.

Outside of the main plot, most of the ambiance of the adventure centers on the shadow aspect of the Dusk Queen. Vision – something most of 5e takes for granted – plays a central role in pulling the feel of the adventure together. The woods are a place of terror and fear, waiting to ambush those who venture into it. Unfortunately, the adventure pathing relies on relatively safe trails that usher places from encounter to encounter. Some consideration of environmental challenges the players might need to overcome would be great to see here.

While this might not matter to a lot of people, I do wish the encounters had more to do individually with the Dusk Queen, rather than just the woods and shadow. One encounter focuses on the mount of the queen – which is really cool. Others are just sort of happenstance going on at the time. This leaves room for plenty of DM finesse and embellishment, but I’m always a big fan of story and theme underpinning everything. If this matters to you, considering how to link the individual encounters strongly to the Dusk Queen and major NPCs is something you will need to do yourself.

As a big proponent of legendary creatures and lairs across all level bands, let me say a lot of what exists in this document would translate quite well to that model. Each area in the forest stands alone as a feature, and most have a notable creature the players have to defeat. Having each area as a lair and each creature as a legendary creature would clean up some of the over-engineering going on in the encounters. That isn’t to say they are a problem, but rather the clarity of the model could improve.

Storywise, everything is clear outside of a few crucial questions surrounding the backstory and the magic mirror. These areas could benefit from even just one additional paragraph addressing possible why’s and how’s. It’s not a deal breaker, but it could be a big help.

Running games for a mid-to-high-level group is hard, without question. Players have such a wide toolbox by this point it is easy to forget about just the right thing that could easily solve their problems. This adventure chooses to limit a lot of options upfront with environmental hazards – such as black stirges to limit climbing and flying. I don’t understand the reason behind this decision, as players can walk from encounter to encounter with relatively little issue, so I don’t see what’s gained here by this blanket rule. Instead, I would rather see the encounters where this matters address the limitations. Climbing is a solution to one encounter, for example, and limiting flying in that encounter would be very interesting, given its nature.

Out of everything in the adventure, I wish more attention had been given to skills and their use. In some cases, succeeding on skill checks is all that moves an encounter or the story forward. In other cases, skill checks are called for, but failing the skill check is just soft damage rather than any real build or release of tension. I understand the difficulty in making this happen, of course.

Beyond the skills, I have some concerns over how fun some of the encounters would be to run as written – particularly the Putrid Bog and the final encounter. In both cases, the encounters strongly benefit from players prepping for them ahead of time, but they can’t really do so in either case. It’s a fine line between challenge and frustration, and it feels like these might be just on the wrong side. That’s just gut feeling.

On the positive side, the open-endedness of the hooks and backstory are fantastic. It’s very easy to take any number of threads from the adventure and pull them into an existing campaign, but they aren’t mandatory. You can easily have this be self-contained, if that is your desire. If you want to expand it, the advice and way things are presented make it incredibly easy to do so. It’s, dare I say it, quite modular in this regard.

Also, the bugbear encounter is really cool. I love everything about it.

While I don’t think Shadow of the Dusk Queen would meet my personal game-running needs, there is a lot here that can work. The “total package” approach to a story is really nice to see, and many, many DMs will appreciate this massive reduction in their legwork. The visuals evoked by the adventure are evocative and powerful, though the cohesion could use a small boost. If you are looking for a gothic romance, this might certainly fit your needs.

I don’t know much about Midgard, but it certainly makes me want to learn more. For me, this is a solid 7.5/10, with a lot of great ideas, but a lot of legwork I would still need to do to run it myself.