Aberrations, Druids, and the Circle of the Zodiac 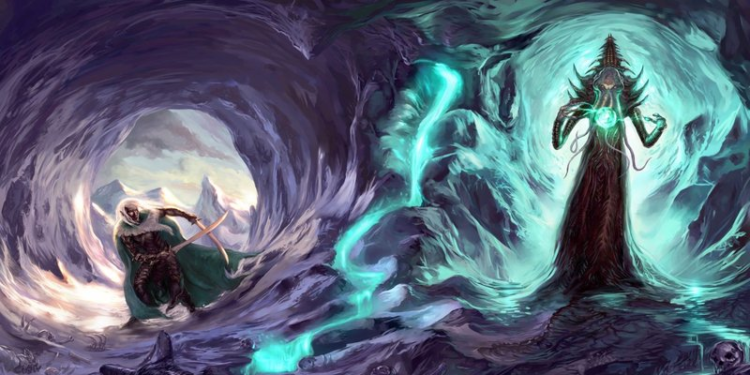 Last week, I discussed an idea that sprung into my brain regarding the Far Realm. While I encourage everyone to go read the discussion in full, the TL;DR of the article is, “what if the zodiac are friendly entities in the stars, protecting us from the Far Realm?” To go along with this concept is a draft of the Celestial Sorcerer – a sorcerous origin drawing upon the ideas outlined in the article. This week, I am looking at aberrations, druids, and the Circle of the Zodiac.

Aberrations first pop up in third edition. This edition reclassifies a bunch of our favorite dudes – Squidface Jones, Rebecca Horrorfish, Bastien Billion-Eyes, Chester A. Troublebox, etc – from what they were into aberrations. Due to the keyword system in 4e – I still love how clean it is – aberrations ended up with aberrant as their creature origin. In 5e, they are back to being aberrations once more. Which is all well and good, but it’s still not necessarily clear to a lot of players what exactly aberrations are.

It’s easy to see where the confusion comes from. As a group, aberrations don’t have a lot of unifying characteristics. If I had to describe aberrations without using game terms, I would probably say, “things that would appear in Lovecraft and Howard novels.” Perhap “Mythos or Mythos-Adjacent” is a little more crisp way of saying it. However, it’s silly to believe everyone has the same frame of reference, or would even agree with my assessment. Relying on the game text alone makes it a more vexing proposition. Particularly if you are looking across editions.

Just as no plan survives contact with the enemy, no lore survives contact with a new edition. In third edition, Chester A. Troublebox – the mimic – was classified as an aberration. In fifth edition, Chaz is a monstrosity – still pretty rude to say about him, no matter how you slice it. It’s not just mimics, but beholders, carrion crawlers, driders, grick, hook horrors, rust monsters, and many others that experience this identity crisis. This is largely due to 3.X’s lore associating the Underdark to the Far Realm. The Underdark creatures are strange and alien – mimicking the deep sea/deep cave weirdness in the real world – and, hey, mind flayers and aboleths, right? To understand how this happened, we need to examine the appearance of the Far Realm in The Gates of Firestorm Peaks.

The Gates of Firestorm Peaks

As mentioned last week, this adventure was first released in 1996, putting it a scant four years from the release of third edition. This is important, as the development cycle of such an undertaking means third edition was almost certainly in the discussion – if not the design – stages at that time. While I have no proof, it also feels like a good chance for designers to show they can work within an existing world, while also having the opportunity to flesh out a major section of iconic – yet ill-defined – lore. Having worked on a lot of collaborative projects that involve playing in other people’s sandboxes, this feels exactly like that to me. Regardless, it’s clear this adventure is a big reason we get the aberrations we get in 3.X.

To quickly sum up, the adventure involves Elder Elves creating a portal to an alternate reality by tapping into a comet on a 27-year cycle. They do this while deep inside a mountain, far underground. Time passes and the elves disappear. However, the portal still opens each time the comet comes around – the horrors from an alternate reality spilling forth when it does. The creatures and energy from this alternate reality warp the areas underneath the mountain where the portal is located.

The adventure also features duergar acting as the guardians of the infected area underneath the mountain, and an evil wizard performing twisted experiments. This wizard learned to master the creatures and energies of the Far Realm – expanding the influence of the warped reality as he did so. The players need to stop the wizard or the influence of the Far Realm will spread across the entire world.

Aberrations, Druids, and the Circle of the Zodiac

As you see, jumping from there to “let’s make the Underdark more aberrant,” isn’t a big stretch. Aboleths and Illithids are natural bridge creatures between the Underdark as presented in second edition and the new, Far Realm-improved 3.X Underdark. Still, it is hardly a unified vision. The only “aberrant attribute” across the creatures is darkvision (though totally blind creatures get blindsight, instead.) In 5e, darkvision is so prevalent, this is negligible. A lot of the creatures have psionic abilities, are heavily magical, or are decidedly anti-magic, but it tends to vary too much to call any of those a trend. They tend to be fairly grotesque and unnatural in a “indescribable horror” sort of way. This complicates things even further when you look at 5e and see these creatures that were once aberrant and now simply monstrous. No wonder players get confused.

Speaking of lore and 5e, the established lore for druids states firmly they are anti-aberration. Now, the established lore also says they are anti-undead, and we know how flexible that is. Still, aberrants are outside the natural order – unless you are running a game where the players are all denizens of the Far Realm, and the standard races and worlds are all the villains – making the idea of a druid circle dedicated to defense against the Far Realm a natural one. Thus, we have the Circle of the Zodiac – druids who study the stars to predict the future and work to prevent the intrusions of the Far Realm.

Circle of the Zodiac

Gathered in clearings, gazing up at the night sky – that is how one is most likely to encounter a member of the Circle of the Zodiac. They stare at the stars and speak of what is to come. The Circle of the Zodiac sees the future in the movement of the celestial bodies, using that knowledge to seek out and prevent the Far Realm – and those that seek to serve or use it – from infringing on the natural order.

At 2nd level, you have learned to divine the future from the positions of the stars, planets, and other celestial bodies in relation to the astrological signs of the zodiac. You have a pool of astral energy represented by a number of d6s equal to your druid level. After completing a long rest, choose one of the following astrological sign interpretations. You may use your astral energy as indicated by the astrological sign interpretations. You may interpret signs differently after each long rest, if you wish. All expended dice are regained when you finish a long rest.

Sign of the Red Knight. As a reaction to a creature within 120 feet that you can see being hit by an attack, you may spend a number of your astral energy die equal to half your druid level or less. Roll the spent die and add them together. The creature gains that many temporary hit points. For every die spent, the creature deals 1 radiant damage whenever they deal damage until the end of their next turn.

Sign of the Jade General. As a reaction to a creature within 120 feet that you can see making a successful hit you may spend a number of your astral energy die equal to half your druid level or less. Roll the spent die and add them together. The hit deals that much additional radiant damage. For each die you grant, you heal 1 hit point.

Sign of the Wandering Scholar. As bonus action, you may give a creature within 120 feet that you can see an astral energy die. The creature can roll the die and add the number rolled to one ability check of its choice. A creature may not be granted a second astral energy die under this sign until the first is spent. Each time you grant an astral energy die, you increase your speed by 10 until the end of your turn.

Beginning at 6th level, you are able to interpret some of the more subtle signs in the heavens.

As a reaction to rolling initiative, choose a number of creatures you can see up to 1 + your Wisdom modifier. You may choose to have the signs show a favorable or unfavorable outcome for these creatures. These signs last for 1 minute.

Creatures with a favorable sign have advantage on attack rolls and saving throws.

Creatures with an unfavorable sign must succeed on a Wisdom saving throw or have disadvantage on attack rolls and saving throws. Any creature who fails this saving throw may make a new saving throw against this feature at the end of each of their turns after the first. Aberrations and monstrosities make these saving throws with disadvantage.

Once you have divined these signs and portents, you may not do so again without completing a long rest.

Note: Cuix pointed out an error I had made in the operational ordering of this feature. The feature has been reworded, and changed slightly in order to make the feature clearer and simpler. The conditional effect against aberrations and monstrosities were accidentally left off, and have been added.

When you reach 10th level, you have learned to draw upon the secrets of the zodiac to defend against intrusion by the Far Realm. You can’t be charmed or frightened by aberrations or monstrosities. You also gain resistance to psychic damage, and have advantage on saving throws to avoid becoming diseased.

Additionally, you are no longer surprised, except when incapacitated by something other than nonmagical sleep.

At 14th level, you have learned how to assume the astral form of one of the astrological signs, taking on an appropriate appearance. For example, you might have chains made of starlight wrapped around you, gain scales that appear as the night sky, or look as if you were sculpted from jade.

Using your action, you change into this astral form. For 1 minute, you exude starlight that provides dim light in a 30-foot radius.

While in this form, you can spend an action to cause a pillar of starlight to strike in a 10-foot radius, centered on a point you can see within 120 feet. Creatures in the area are engulfed in starlight, and must make a Constitution saving throw. Creatures take 4d10 radiant damage on a failed save, or half as much damage on a successful one. Aberrants and monstrosities make this saving throw with disadvantage.

In addition, for the duration, allies within 30 feet of you have advantage on saving throws against spells cast by aberrants or monstrosities.

Note: This ability has been updated to increase the damage from 3d10 to 4d10. The general consensus in the comments and outside conversations is 4d10 might be a tiny bit strong, but 3d10 is on the lower side of top end powers and needs a small nudge.