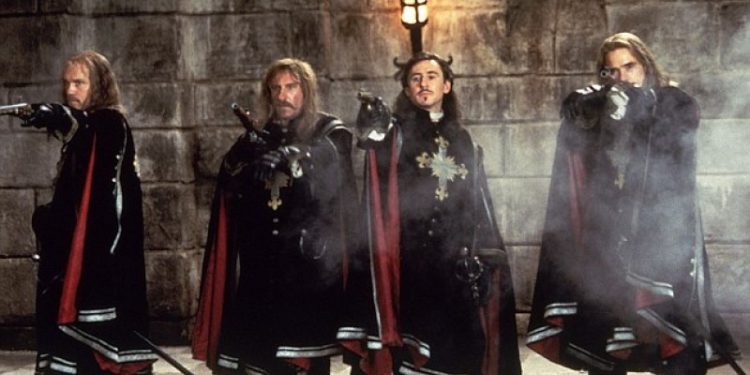 Shawn recently posted his gunslinger class, and today I’m offering this subclass for it. The Musketeer is explicitly intended to model the heroes of Alexandre Dumas’ romances, with swordplay, guns, and undying loyalty to one another.

You’ll find the finished Gunslinger class and everything you need to run exciting seafaring campaigns full of swashbuckling action and magical adventure for Fifth Edition.

Get the Seas of Vodari at DriveThruRPG ›
Pre-Order the Hardcover ›

Some gunslingers take up their weapons in service to the Crown. Defending the monarch’s honor is the only thing more important than earning a reputation for personal gallantry. A musketeer develops their fencing skill as much as their marksmanship, so that they can accept any duel – or keep fighting even when the enemy charges them directly.

At 3rd level when you choose this archetype, you gain proficiency in all martial weapons and medium armor. When you wear medium armor, you add 3, rather than 2, to your AC if your Dexterity is 16 or higher.

Esprit de Corps. When a creature who can hear and understand you within 30 feet rolls a saving throw, you can expend a bravado point to shout encouragement, adding 1d6 to the saving throw result. Beginning at 17th level, roll 1d10 instead of 1d6.

Follow-up Shot. When you attack with an off-hand firearm as a bonus action and hit, you may spend one bravado point. Roll 1d8 for each attack roll you have missed in this turn and add the result to the damage roll of your off-hand firearm attack.

Opening Salvo. When you roll initiative and you are not surprised, you may spend a bravado point to make a ranged attack with a firearm.

Servant of the Crown

Beginning at 13th level, when you roll a Charisma (Deception), Charisma (Intimidation), or Charisma (Persuasion) check and dislike the result, you can spend 1 bravado point to reroll the check. Take the higher of the two rolls and add your current number of expended bravado points to the result.

Starting at 17th level, when you roll initiative and have no bravado points remaining, you regain 1 bravado point.

An earlier draft of this did something different with the mechanics of Follow-up Shot, and didn’t include Esprit de Corps or Opening Salvo. That also meant that for a class with “musket” in the name, there was surprisingly little expectation that you’d ever use a firearm that wasn’t a pistol. That didn’t seem quite right.

The fact that it is a gunslinger (rather than, say, a fighter) that expects to use melee weapons for a fair portion – maybe a majority – of their attacks is one of the definite oddities here. I hope it works, and results in a character who is fun and effective at every range.

I’ll acknowledge that the Swordplay feature is awkward in a few different regards. For one thing, medium armor is mostly not great. The language around Fighting Styles in the second paragraph was the best I could do, but feels a little clunky.

Finally, the gunslinger is still in its own playtest stage, so anything here is subject to change in response to changes in the core class.

D&D on a budget